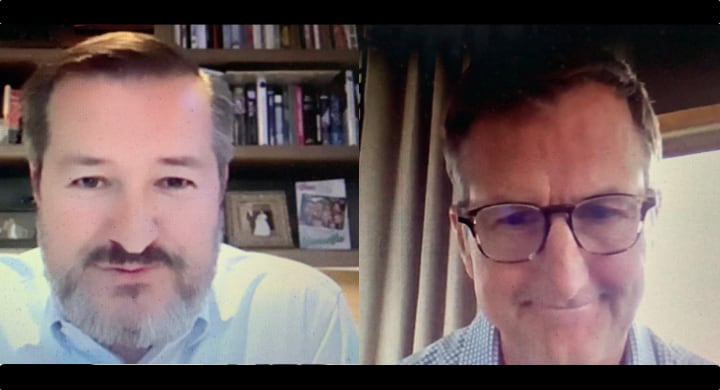 On Thursday night, Cubs chairman Tom Ricketts and President of Business Operations Crane Kenney engaged Cubs season ticket holders on the status of the franchise, the near term plans, long-term hopes and much more. You can catch many of the details in this handy and comprehensive Twitter thread and much more in Patrick Mooney’s latest at The Athletic.

For our purposes here today, we’ll just dump the key details and add any commentary as necessary.

•   No one can say for certain that there will be baseball played this year, though the current discussions among owners has been about getting the sport back on its feet and in home ballparks for this season, “obviously, without fans.”

•   That does, however, create a couple specific problems: The first and most important: safety. The league has put together what Ricketts believes are the most extensive set of protocols and medical safeguards out there. Obviously, we now know that those protocols do not include daily testing, so, well … you know. In any case, Ricketts believes that the protocols do create a safe enough working environment for their players to return “this July.”

•   The second and most challenging: finances. According to Ricketts, “about 70% of the revenue that comes into our organization comes in on day of game. It comes through selling tickets. It comes in through selling concessions. It coms in through the ballpark experience.” Now, I’m going to leave that comment alone for now, because (1) we have very little insight into the actual revenues of a ball club, (2) Ricketts and the rest of the owners have a clear motivation to inflate that number as high as possible, but that doesn’t mean it isn’t accurate, and (3) the union has requested a deep financial investigation into exactly these figures, so we should have a clearer answer soon. However, I will say now that a 70% figure is significantly larger than the estimates we’d seen earlier this spring.

•   Positively, I’ll note that Crane Kenney indicated that even if negotiations take longer than expected, the league is open to adjusting the schedule while pushing everything back. Of course, that would mean an even shorter season than the 82-game schedule initially proposed, as concerns over a winter relapse still linger in the minds of health care professionals.  “I can tell you I have a weekly call with the commissioner — all the team presidents do — and he is steadfast in his desire to play baseball this year. Even if that is a very short season. Even if it is one where the playoff format changes.”

•   To that end, Kenney did say that they have not yet given up on bringing fans back into the ballpark this year, though that obviously depends on testing, extremely limited groups, and a strategy of phasing players in. Even still, Kenney contends “it’s our hope and our expectation that we would get the ballpark open this year for fans, if only for the playoffs.” I certainly wouldn’t get excited about fans at Wrigley Field this year, though I suppose if things go JUST RIGHT for long enough, some fans for some games at the very end of the season is possible. That’s just my speculation, but I think it’s fairly understandable. With that in mind, if fans are allowed back in, season ticket holders would get priority for those tickets.

•   Continuing, Kenney reiterates that some ticket holders for games in March, April, and May were refunded (apparently by mistake), but those that weren’t will earn 5% interest on their money. Refund plans for future games that still may not be played, meanwhile, have not been determined yet.

•   Kenney also intends to engage fans through online, including Instagram workouts, recipes by the Cubs nutritionist, and behind-the-scenes looks from Watch Marquees 163 series available on YouTube.

•   According to Kenney there are still two or three major ballpark modification projects remaining, though the updated pressbox, improved concourse work, and extended netting projects are all done. As for the schedule concerts at Wrigley, the Dead and Company and Zac Brown Band shows have been cancelled and the money has been refunded. Other shows will fall into three categories: postponed, rescheduled, or cancelled. In short, decisions have not been made on all shows.

The new organist will play at Wrigley tomorrow for the neighbors!!
Awesome!!

•   Currently, the Cubs are not looking for any price increases for the 2021 season, a line I don’t think he would have added flippantly, but we’ll have to just wait and see on that one.

•   Cubs Charities created a COVID-19 response team, which provided hotel rooms to front line workers at Hotel Zachary as well as food donations at Wrigley Field (3,600 meals have been delivered to hospitals and clinics. Cubs Charities are also providing iPads for ICUs, so that patients can connect with their families and friends while quarantined. Meanwhile, the Lakeview Food Pantry has also engaged in a partnership allowing them to use Wrigley Field as a temporary packaging and distribution center.

•   Circling back to the season, Kenney believes that Spring Training will happen at Wrigley Field if it happens at all, though he’s working with the Mayor to ensure the safety guidelines the city has enacted so far – the concern, it seems, is about crowds around Wrigley Field on game days and practices, but the response is that VERY few people will ever come into direct contact with the players for obvious reasons.

•   There has been no discussion about CubsCon 2021, but they will keep fans informed. My guess? No freakin’ way. That is one tightly packed event.