New Cubs Mock Drafts Come Down to One Question: Play It Safe in College or Go for Upside in High School? Skip to content 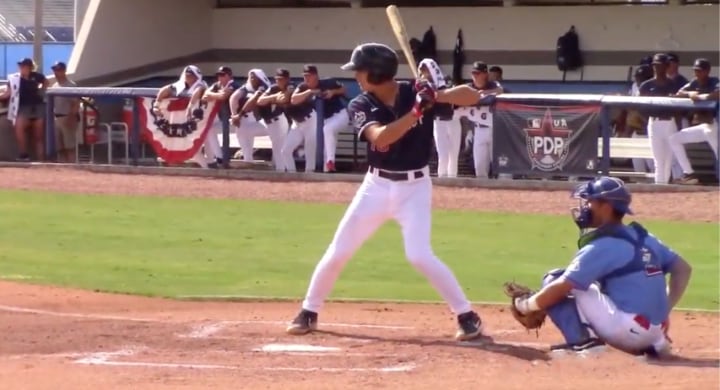 In the most recent mock draft from Kiley McDaniel, the Chicago Cubs were projected to take one of the safer first-round college arms, Tanner Burns, with their first overall pick (No. 16). And, indeed, Keith Law projected the exact same outcome in his recent forecast. That’s a lot of smoke from two solid draft gurus – and, of course, a logical conclusion as teams are expected to prefer better-known quantities this summer (college players have longer track records), given the reduced opportunity to scout high school players during a global quarantine.

And yet, in two other first-round mock drafts, the Cubs are projected to go in a very different direction.

Let’s start with the latest from Jim Callis at MLB Pipeline:

Looking forward to the #MLBDraft? Us too.

With their first pick in the 2020 MLB Draft (No. 16 overall), the Cubs are projected to take high school catcher Tyler Soderstrom. Here’s what Callis has to say about the Cubs overall strategy and this particular projected pick:

The Cubs need pitching but have had much more success drafting and developing hitting, especially in the first round. The track record of high school catchers in the first round is lousy — the last two to stay behind the plate and accrue even 5 WAR are Joe Mauer (No. 1 overall in 2001) and Jason Kendall (No. 23 in 1992) — but Soderstrom has a quality bat and the athleticism to profile at third base or on an outfield corner.

Setting Soderstrom aside for a second, I’d like to address the Cubs draft pick “history,” as discussed above. While it’s true they’ve had some bad luck identifying pitchers in the past, it remains important to note that there is a new guy in the room, Dan Kantrovitz, in part brought in to address this organizational shortcoming.

Theo Epstein and Jed Hoyer are still there running the show, but they wouldn’t have brought in a budding-GM candidate like Kantrovitz to lead amateur scouting if they didn’t intend to let him drive. So while I agree they’ve had more success drafting and developing position players – and, even think that’s probably still the direction to go – it’s not solely because they’ve been bad at this before. That argument isn’t entirely fair.

Then again, if the problem is the development of talent, not the identification of talent, then a better picker won’t necessarily solve all the Cubs problems.

As for Soderstrom, in particular, he is one of just seven high school players projected to go in the first round of the draft, though he was projected by Kiley McDaniel to fall all the way to the Rays with the 24th overall pick.

Here’s what McDaniel had to say about him, for a little added context:

Some clubs have Soderstrom’s offensive ability evaluated with the three top prep outfielders, who all went in the top 10 in this projection. He’s a fine catcher who has improved behind the plate, but most objections about his defense aren’t taking into account a likely automatic strike-calling future by the time he gets to the big leagues. He’s also athletic enough to play any corner position. Soderstrom may be the best example of a player that I’ll have ranked higher than where he goes in the draft, because the risky prep catcher demographic doesn’t apply to him as much as it may appear.

For what it’s worth, Keith Law projected Soderstrom to go 13th overall.

These three mocks seem to agree on the quality of Soderstrom’s bat and his ability to move to first, third, or even either corner outfield spot as necessary. But like Kyle Schwarber, Soderstrom will probably be developed as a catcher (for as long as possible), where the value of his bat will always be a touch higher.

[Brett: Not that you’d draft based on position when considering a high school bat, but it’s worth noting that the Cubs do have significant young catching prospects at the lowest levels – Ethan Hearn, Ronnier Quintero, and Brayan Altuve among them – who’ll need starts. And with the minor leagues shrinking, you might have to spread starts around a little more thoughtfully when it comes to catchers.]

Not unlike Callis, Baseball America’s first round mock draft sends a high school bat to the Cubs with the 16th overall pick, outfielder Robert Hassell:

The Cubs should have a number of college arms to pick from at this spot if they want to go that direction again after taking Fresno State right-hander Ryan Jensen last year. However, it’s rare that the best pure hitter in the prep class gets to this pick, so Chicago could have a steal here with Hassell.

Once again, the theme is clear: This draft is deep enough in college arms during a year in which college players will be heavily preferred, that the Cubs could simply pluck one off the board and be happy/safe about it. But given that they’ve had so much success developing hitters in the past *and* this is the year you could get lucky on a high school kid that falls out of fear from other teams, taking a young position player isn’t out of the question.

The question is if this particular player will really last this long.

All three of our other draft gurus project a top-10 selection for Hassell, with Keith Law predicting a selection as high as No. 8 overall. None of these four mocks have too much information on the outfielder, but I think the consistent top-10 forecast says it all: If he were to fall to the Cubs at 16, it would be viewed as quite an opportunity. For that reason, I wouldn’t get too excited just yet. Teams may want to avoid high school players, but sometimes obvious top-10 talent is just that.

So to wrap things up, here’s the projected pick for the Cubs from each source:

And here’s the highest and lowest each of these three players were mocked across all four publications: