MLBits: Could COVID-19 Lead to MLB Expansion? Judge and Stanton Will Be Ready, An Asterisk on this Season, More Skip to content 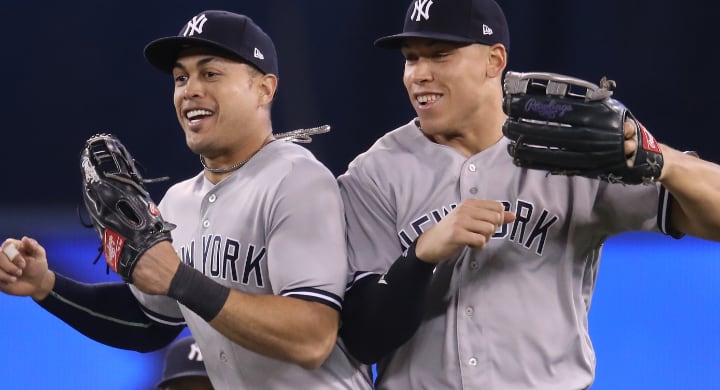 When I’m writing here on Bleacher Nation, yes, I joke around a little bit, but for the most part I play it straight. We’re not some stodgy, century-year-old traditional media outlet with strict rules and expectations, but you only have so much patience for the jokes. I get it.

On social media, by contrast, I’m free to do me – especially when it comes to my stupid or silly TikToks. Sadly, for every one joke that lands on Twitter, about ten others fall flat on their face. Today, was one of the latter:

You see, it’s funny, because it’s like I didn’t know you could “accidentally” see all those pictures and google searches of Anthony Rizzo, because I’m obsessed with him. It’s funny. Why aren’t you guys enjoying it. I’m pretty sure I’m hilarious. Please like me.

Here’s some news from around baseball.

Over the past year or so, MLB began (publicly) discussing their intentions to eliminate 15-20% of all Minor League Baseball teams, but it wasn’t until the economic pressure of COVID-19 that enough momentum was built up to actually enact that plan.

According to CBS Sports, expansion could come sooner than later, if MLB follows the playbook they’ve used in the past: “Truth be told, expansion has only a tiny little bit to do with growing the game and a lot to do with the big cash influx, historically. The Marlins and Rockies exist in part because clubs had to pay their $280 million collusion settlement to the MLBPA prior to the 1991 season.”

Former Commissioner Fay Vincent put an even finer point on it: “Look, each owner had a $10 million bill and there were about 26 clubs before expansion and 30 at the moment, then $280 million, let’s say $10 million a club – they didn’t have the money. So they did what most would business do, they sold stock, they sold interest in the clubs, in the expansion clubs. In my day two of them – Miami and Denver. And that money, which was vital, paid off their collusion debt. Without it I think baseball would have had a very serious time.”

Obviously, the league doesn’t have a specific number/debt to repay, but undoubtedly owners will be more desperate for revenue than ever. If expansion was already on the table *and* could very quickly create a cash influx for each team, you can absolutely expect them to explore that possibility sooner than later.

We expected two-team expansion within the decade, now I wonder if it might happen in half that time.

Aaron Judge and Giancarlo Stanton Will be Ready

Aaron Judge has been recovering from a fractured right rib for the past couple months, but is making progress and is anxious to get back in the cage: “It’s been tough,” Hitting Coach Marcus Thames told the YES Network on Thursday. “He walks by the cage. He comes in to help the guys pick up balls, and he really wants to get going, but we’re just trying to stay safe. When the doctors turn him loose, he’ll be ready to go. He’s champing at the bit to get out there and start working hard on his swing.”

Judge is/was also dealing with pneumothorax, or a collapsed long, which is obviously especially scary in a COVID-19 world.

However, GM Brian Cashman believes that once baseball returns this season, he’s going to be available at full capacity.

And the same can be said for Giancarlo Stanton, who was sidelined during spring training due to a right calf strain. He’s already hitting off the machine and taking batting practice on the field.

Together, this duo projects to be worth 6-8 WAR over the course of a full season, so let’s say 3-4 WAR in an 82-game year. But instead of looking at it that way, consider that the Yankees will likely have both for 100% of the 2020 season, and that might prove all the difference in the AL East battle. Who knows what would’ve happened, if they had to go without both for all of April, May, and part of June.

Is There an Asterisk on this Season?

If baseball does return this year and is able to finish out whatever regular and postseason they create, do you think the World Series champion will be clouded by an asterisk? That’s what five CBS Sports writers contemplated in this recent round table:

MLB roundtable: Is the World Series champion in an 82-game season a legitimate one? https://t.co/Kaw7aOk94a

Like all five, however, I believe this season’s winner will be 100% legitimate. The postseason is already largely an unpredictable crapshoot, given the complexities of cramming in a very long-term sport like baseball into very short-scope postseason series. So I don’t really see why this should be any different.

The teams that make the playoffs may certainly not match the teams that would have been there in a normal year, but I don’t think that really matters. These are the rules this year, do your best to win. Whichever teams wins is legitimate.

(Unless it’s the Cardinals, then it’s definitely B.S.)

At MLB Trade Rumors, Jeff Todd runs down the list of MLB’s top-5 most traded players (among the guys who played last season (so think “active” players)), and I was able to guess two correctly. Can you name them without looking? I’ll give you a hint, two were former Cubs (I got just one of them), one was a former White Sox player, and another was a pretty successful closer in the NL Central (got this one).

Jesse Chavezn(1st, 8 trades) and Edwin Jackson (t-2nd, 7 trades) were the former Cubs and Mark Melancon (t-5th, 5 trades) was the NL Central closer. Check out MLBTR’s post for the rest.

This is so awesome *and* my wife would never allow it:

So cool. /u/OriolesGuy99 made his very own standings board, with movable slates. WANT. pic.twitter.com/N1sziWQXO4

The @Indians on Twitter are right up there with the @Cubs and @Rockies for best social media presence. This 2019 season stunt is absolutely hilarious: