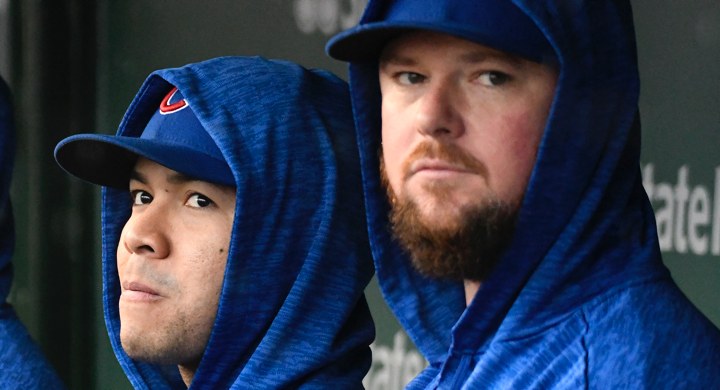 Bryan put up an interesting thread on Twitter – go follow him! – and because it’s a rare opportunity to chat about actual baseball, I thought I’d share it here, too. And in the process of sharing it while typing, I went in about 10 different directions. I guess I’m starved to talk about this stuff.

It’s no secret that, even before the pandemic did whatever it’s ultimately going to do to this season, the Cubs have a wide, wide open rotation for next season. Kyle Hendricks and Yu Darvish are under contract and presumed members of the five-man group next year, but that’s it. It isn’t too often that a rotation features three wiiiiiide open spots in a given offseason.

Take it away, Bryan, and I’m gonna slide in and out of your thread with some of my thoughts:

First will be the Jon Lester decision. He has essentially a $15 million option (25M contract vs 10M buyout). Lester will turn 37 in the offseason of this decision. I suppose you could rip up the contract and negotiate something at a lower AAV for 2-3 years?

A lot of the Lester decision depends on how he’s looking at the end of this season, whatever it may be. I think the $15 million price tag on the option, in this environment, is gonna be way too steep for him. But I do think, as Bryan does, that the Cubs might see value in a two-ish year deal that keeps Lester around at a low AAV. (Does AAV even matter in the 2021 context anymore? I kinda suspect it won’t, but that’s a discussion for another day).

When you’ve got three spots to fill, you won’t be able to assume you can just go out and get the guys you want. Retaining a veteran, solid-if-unspectacular arm like Lester’s could be a very good idea.

Hanging over all of this is the decision on player payroll, which like it or not, will be impacted by organizational financial losses in 2020. With rising costs from the arbitration eligible offensive players in 2021, how limited financially will the Cubs be in finding 3 SPs?

I think your second tweet answers your first, Bryan. Even in a world where Quintana looks absolutely brilliant in a half-season this year, I would argue that he’d be crazy to turn down a one-year, $17.8-ish million deal this offseason. Maybe the Cubs will want to keep him at that price. But again, given what I expect to happen to payrolls around baseball this offseason, I wouldn’t at all be shocked to see that a guy like Quintana – again, even if he’s great this year – has a market that’s full of surprisingly short, surprisingly low-dollar offers. Getting one year at a good price point might be his best deal, hoping that things are better by the next year.

I feel like the looming hammer of a reduced payroll and the need for young players to fill rotation spots makes the likelihood of trading one of the offensive free agents-to-be (you know who I’m talking about) higher than it would have been pre-pandemic.

To the first point, I’m not sure the Cubs will have a choice but to commit a rotation spot to a competition among many of the young arms. You wish several of them were further along *AND WEREN’T ABOUT TO LOSE A WHOLE FREAKING DEVELOPMENT YEAR,* but this is the situation. Teams that have ready-to-go young pitchers are gonna be in the catbird seat next year, and the Cubs, for as much as we’re dreaming on the pitching coming up through the pipeline, just aren’t there yet. Here’s hoping Alzolay stays health and breaks out, or Abbott shows it really is big league stuff, or Cotton unlocks something with the Cubs, or Mills is as legit as he’s looked at times, or Marquez is just ready to make the jump.

As to the second point there – Bryan’s talking about trading Kris Bryant for a pitcher – I don’t think he’s wrong, philosophically, but my position on Bryant has become this: for one year of control at his expected arbitration price tag in 2021 ($22+ million?), his trade value this offseason is going to be shockingly little. Again, welcome to the post-pandemic economic realities. It sucks. It sucks so much for so many reasons, but that ain’t gonna stop the reality. Your best hope on the Bryant front is that, despite his agent’s protestations to the contrary, Bryant decides it’s best to take an extension with the Cubs sooner rather than later (and the Cubs pony up to do it).

If I had to guess today what the 2021 Opening Day rotation looks like, here’s what I got:

Given the flow of his thread, you can see why Bryan lands here. And hey, if the Cubs landed a stud for Bryant, it’s a rotation that could play. Of course, then they would also be without Bryant, so …

As for me, as we sit here today – so much can and will change! – I think what we’re most likely to see is a rotation fronted by Hendricks and Darvish, with at least one of Lester, Quintana, and Chatwood returning on a modest free agent deal. The other two spots are most likely to be filled by one in-house guy from the big group above, and then an external addition, which is probably going to come via free agency. Not a stud. Just a reasonable, short-term deal on a reasonable arm.

… and, yeah, that’s not necessarily a great looking rotation. In better times, you might look at that and decide to punt on 2021 to avoid the post-2021 cliff, but doing aggressive selling this “trade deadline” (if it exists) or this offseason is almost certainly going to be impossible. Think about how much teams are NOT going to want guaranteed dollars on their books. Think about how EXTREMELY valuable cost-controlled youngsters are going to be.

Call me way too negative, but at this present moment, I think the Cubs are in a terrible spot for 2021-22. Their best bet – after a very disappointing offseason (remember that?) – was either getting hot and going deep this year, or sucking and selling at the deadline. Without that latter possibility, then it’s probably just going to be ride-or-die with this group for this year and next year, and then pray to the baseball gods that you’ve developed enough internally over the next two years to not fall off that cliff after 2021.

I kinda meandered my way here, but I guess where this process just got me is that the Cubs’ player development efforts over the next two years have become even more critical than they already were. CHEERS!