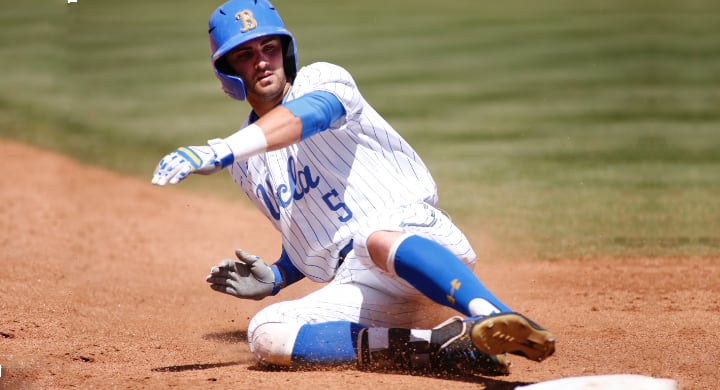 The (five-round) 2020 MLB Draft will begin exactly two weeks from today, which makes right now the perfect time to check back in on some of the latest mock drafts.

So far, we’ve examined projections from Kiley McDaniel (Tanner Burns, RHP), Keith Law (Tanner Burns, RHP), Baseball America (Robert Hassell, OF), and Jim Callis (Tyler Soderstrom, C) with a connective theme settling on the risk/reward profile of high school picks versus the security of better known college quantities. Striking that balance is obviously always a consideration, but it’s drawn more attention than usual this year, as teams are unable to scout high school players during the global pandemic. Put simply, the risk/reward calculus is more extreme than ever.

And that’s exactly where we’ll start today, because Kiley McDaniel updated his informed mock draft, and not only changes his Cubs pick from the safer college righty, Tanner Burns, to the riskier, but higher upside Garrett Mitchell, but does so with the express knowledge that the Cubs have been moving in this direction: “The Cubs have a new voice at the helm of their draft in Dan Kantrovitz (formerly with Oakland and St. Louis), and clubs have noticed them showing more interest in upside types than they did at their top pick in recent years.”

I had hoped the Cubs would be more willing than usual to gamble on upside in this draft – this is precisely time those sort of players will slide further than usual – but now we finally have some rumors of exactly that. Meanwhile, Kantrovitz has built his career on his draft prowess, and I’m glad to see the Cubs allowing him to be himself.

As for Mitchell and all that perceived “risk,” McDaniel believes he’s a consensus top-10 draft prospect, who might slip beyond the first 10 picks because of his lack of in-game power, some stagnation in college, and the fact that he has Type 1 diabetes.

However, a high contact rate, a 70-grade on speed(!), and 55 raw power at his position should be more than enough to attract your attention. There’s also this little fact that he has refused to play baseball in the fall throughout his college career, which strikes me as an opportunity for extreme growth more than anything else (similar to when a two sport athlete finally commits one way or the other).

The assumption is that he doesn’t make it past the middle of the first round.

This is not a typical Cubs prospect, by this front office’s standards, but this is far from a typical draft year. I like it.

For what it’s worth, Longenhagen has Mitchell going 11th overall to the White Sox in the 2020 MLB Draft, five sports before the Cubs pick.

Instead, he sends college right-hander Cade Cavalli to the Cubs, under the assumption that they, like the Reds, Rangers, Red Sox, and Diamondbacks, might be “more motivated than usual to take a pitcher who they can plug and play in their bullpen sometime this summer,” before developing him into a starter down the line.

I don’t hate starting pitching prospects out as relievers to acclimate them to the show before unleashing them as a starter. I do hate taking a safe college arm because he can be a reliever for you in a half-season that might not ultimately get underway or finish.

Cavalli wouldn’t be projected near the top of the draft if he didn’t have upside beyond that, but this pick – as a strategy – just does not square with the current environment, or the Cubs near-term needs/long-term expectations.

Of course, the Cardinals have been projected to take Cavalli elsewhere, which means he’s obviously going to be a stud.

The riskiest draft picks come from high school and the riskiest prospects are pitchers, so I should love this pick, right? Actually, yeah. I do.

According to Collazo, Abel is the 11th ranked player in this draft class, who would fall only because of the obvious risk concerns. With that said, his “upside is substantial” and I think that’s exactly the direction the Cubs need to be heading this year (have I said that already?).

Kiley McDaniel mocked Abel to the Red Sox, one spot behind the Cubs, in his update, but noted that he’s “arguably the top prep pitcher in the draft.” And if the Red Sox new head of baseball ops, Chaim Bloom (from the Rays) wants to gamble on his upside, you can bet I do, too.

[Brett: I’ll just add, generically, that in early-draft-season reading (seems like a lifetime ago), Abel was getting serious heat as one of the top prospects in the draft, if you had the stones to take a high school arm early.]

Here’s each player projected to the Cubs from the mocks we’ve covered so far:

And here’s the highest and lowest each of these six players were mocked across all four publications: