2,500 Cubs Fans Polled and One Thing Was Clear: They Want Sammy Sosa Back Skip to content 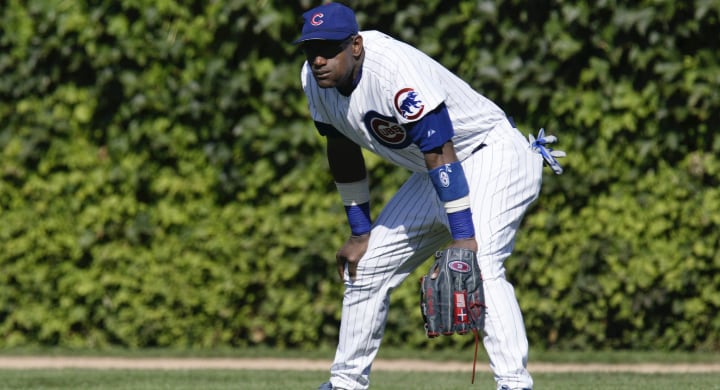 These are just some of the most prolific duos of all-time, and the latter two collaborated on another post at The Athletic that you’re going to want to check out this week if you haven’t already.

Our readers' thoughts on the Cubs future? “MUST DEVELOP ARMS!” “A little nervous because of what the White Sox have built.” “In Theo we trust (I guess).” See more thoughts on that topic, how fans think ownership is doing, future Cubs' HoFers & more https://t.co/euWSwo6tZc

On 25 important questions facing the Chicago Cubs organization – from Marquee, to front office decisions, to free agency, Wrigley Field, the future of the franchise, and a lot more – Sharma and Mooney polled 2,500 Cubs fans to get their perspective, while offering some commentary/reactions of their own.

You can find the full list of questions at the bottom of this post, but you’ll have to head over to The Athletic to check out the results, as well as the responses from Mooney and Sharma.

In the interim, I did want to address the one that stood out to me most, particularly as it’s become more topical than ever with a certain documentary scheduled for this summer …

#4 Should the organization welcome Sammy Sosa back to Cubs Convention and let him do the seventh-inning stretch at Wrigley Field?

It isn’t surprising that the majority of Cubs fans said yes at this point, but it was mildly surprisingly how strong the divide was: nearly 80% of the 2,500 replies screaming YES! BRING HIM BACK! And you can count me among them.

I know Sosa left the franchise under less than ideal circumstances, has battled through steroid and bat-corking scandals, *and* isn’t in the best standing with some former players who’ve stuck around the team since their departure from the roster. All fair. But at some point in time, after more than a decade, enough’s enough.

Brett and I have said our peace on this before, but the long and short of it is this: The Cubs franchise – and MLB – was forever changed by Sammy Sosa, and mostly for the better. Indeed, he’s *the* reason I and so many others are Cubs fans to this extent in the first place. And I know some in the organization have apparently staked any official return on a public apology from Sammy Sosa (which almost happened in 2014), but I’ve always felt that it shouldn’t really be up to those leaders. Seems like it should be up to the fans, and they want a reunion.

Sharma agrees: “I’ve long felt Sosa should be welcomed back by the organization, but both Tom Ricketts and Sosa are being pretty stubborn here. Ricketts has admitted that players from the PED era should be given some leeway. But he’s still looking for, well, something from Sosa. Essentially, some sort of vague recognition or private apology for using PEDs, something Sosa has yet to admit to, would be needed before the organization brought Sosa back into the fold.”

Ultimately, I believe Sosa belongs to the Cubs history, and the Cubs history belongs to us. In other words, someone owned the team before the Ricketts family and someone will likely own them after them. So please, Cubs, don’t prevent the fans from having the reunion we all so clearly want by holding him to some apology few, if any, are still seeking.

He cheated. We know. A lot of players did. It wasn’t OK. We still want him back. And this summer could provide a perfect opportunity.

1. Would you go to a game at Wrigley Field without a Coronavirus vaccine?
2. Will COVID-19’s economic fallout change your habits, in terms of buying Cubs tickets or the ability/willingness to spend money in Wrigleyville?
3. How would you grade the Wrigley Field renovations.
4. Should the organization welcome Sammy Sosa back to Cubs Convention and let him do the seventh-inning stretch at Wrigley Field.
5. Should the Ricketts family bring back the ownership’s fan Q7A session at Cubs Convention?
6. How would you grade the Ricketts family as Cubs owners?
7. After the 2021 season, the Cubs should?
8. If there is a 2020 season, how many wins will new manager David Ross be worth in his first year on the job?
9. When will the Cubs win their next World Series?
10. Rank the players the Cubs should prioritize for a contract extension.
11. Whose departure would hurt the organization most?
12. Who will be the most productive Cub over the next decade?
13. How big of an impact will the changes in player development and amateur scouting have?
14. Which Cubs are future Hall of Famers?
15. The next Hall of Famer with Cubs ties will be …
16. Does your current cable/streaming TV Plan include Marquee Sports Network?
17. If you don’t currently get Marquee, will you switch carriers or add a streaming service to get it?
18. How would you grade Len Kasper and Jim Deshaies as a broadcast team?
19. Which Marquee analyst should be featured most prominently in the booth and the studio?
20. Who is your favorite current Cub?
21. Who is your all-time favorite Cub?
22. What is your favorite Wrigleyville bar/restaurant?
23. What does Wrigley Field need in terms of alcohol options?
24. What is your favorite food at Wrigley Field?
25. In one sentence, describe your feelings on the state of the Cubs and the franchise’s future?