MLB Players Will Reportedly Respond to the Owners' Proposal, But Won't Bend on Prorated Pay Skip to content 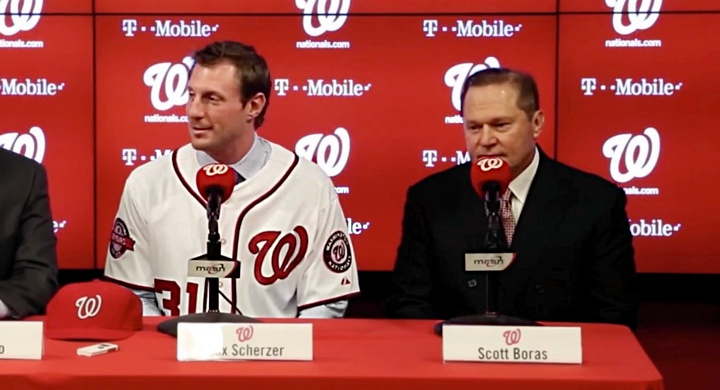 Like I said yesterday, the owners offered their ultra-aggressive proposal for the economics of a season, and now the players’ leadership has responded with their own ultra-aggressive take. This is just what it looks like when two sides are locked in a high-stakes negotiation that they are viewing, with some animosity, as a winner-takes-all situation. “Having a season for the fans and the country”? Pfft. You knew that was always PR BS. Each side wants to win, and it wants to crush the other side in the process.

So it has been in professional baseball for the last five years, and so it will continue to be for the foreseeable future, whether it takes out this year or not. Since I speak here with the voice of a fan, let me just say up front: this all really sucks. But we have to dig in. So I dig.

After the owners’ sliding-scale pay cut proposal, you can see what player leadership is going to say going forward based on Max Scherzer’s message last night.

Scherzer, who is on the players union’s executive subcommittee, and who has tweeted just once in the last year, put out this statement:

Maybe some more documentation would solve this whole thing … but since I don’t see the owners offering up substantial financial documentation of all their related businesses over the next five days (and a year before the CBA expires), I don’t know that sudden document disclosures are going to bridge this gap.

Instead, the players will reportedly submit their own proposal to the league. They are going to stick to their argument that the interim agreement from March, in which the players agreed to receive prorated pay (i.e., full salary, but only for the games that are actually played), is the final word on any of these discussions. They and their lawyers have made a determination, both on the language of that agreement and on strategy: based on what we’ve seen of the agreement, it is true that the owners cannot force the players to take less than prorated pay, regardless of fans in the stands. Moreover, under that agreement, assuming the health and safety component can be resolved, it is the owners who decide if the season begins.

The players are setting up to dare to MLB and its owners: either you pay the full prorated salaries, or, under the agreement, you simply decide not to start the season.

So, it shouldn’t surprise you that Trevor Bauer sent this out last night:

Hearing a LOT of rumors about a certain player agent meddling in MLBPA affairs. If true — and at this point, these are only rumors — I have one thing to say… Scott Boras, rep your clients however you want to, but keep your damn personal agenda out of union business.

Obviously Bauer is uniquely outspoken, so I don’t think you can fairly assume this is a “Boras’s clients versus all the other players” situation. But it seems not every single player is on board with a process being steered by Boras. Which, it’s possible, this process now is.

I won’t immediately comment on whether that’s a good or bad thing, ultimately, for the players, as Boras often does get the best for his players, and lord knows the players have been steamrolled in negotiations for years. I will also note the threat built into Scherzer’s message (which, again, I’m thinking originates with Boras, even if adopted by Scherzer): we think we know more about the owners financially than is out there publicly, and if we got the financial information we were seeking, the owners wouldn’t be so quick to cry poor this year. That further underscores the choice the players seem to be offering: pay us full prorated salaries in order to have your season, or cancel the season and do even more damage to yourselves than to us. That seems to now be the players’/Boras’s working theory.

This whole thing now has all the hallmarks of a Boras process. Be extremely aggressive, toe the line on that aggressiveness for as long as possible, and call the bluff that owners/teams won’t eventually pony up on a great contract. Sometimes it works really well like it did for Scherzer’s free agency. Sometimes it blows up, like it did for Stephen Drew (do you even remember Stephen Drew?). It does seem more often than not that Boras ultimately gets the good deal for his clients, though. Just sayin’.

Also, though, I have to note the obvious: Boras and his company have a very large personal stake in the outcome of these negotiations, and it mostly involves protecting the highest-paid players, rather than protecting all players across baseball. I’m not saying that his company doesn’t have lower-paid clients, and I’m not saying he isn’t thinking of all players. I’m just saying the obvious. There’s a whole lot more money to be lost by the Boras Corporation if big-timers like Scherzer take a haircut.

Now we wait. As ugly as this looks – and make no mistake, it’s needlessly ugly – I can’t help but think this remains par for the course. If there were actual trust or a positive working relationship here between the owners and players, then a proposal like the one from the owners or a response like the one from Scherzer would have me freaking out. As things stand, though, this should just be expected. The owners are being extremely aggressive. The players are being extremely aggressive. They all want to “win.” It’s annoying as shit if you’re a fan who just wants to see baseball, but I don’t yet know that I’m more concerned about that than I was last week (which is to say: still somewhat concerned).

My guess is there is a period of relative silence for the next four or so days, punctuated by leaks on both sides about how awful the other side is. It’s going to seem like a deal is impossible. People will probably even say as much. And then next week will arrive, and with it a kind of deadline, and that’s when we’ll really know if the sides will seriously try to find a solution. Or not.

Ken Rosenthal and Evan Drellich at The Athletic, and Jeff Passan at ESPN, each have more on the situation, where they report the players might actually seek even more from the owners, in the way of a longer season:

News at ESPN: Players want a season of 100+ games, full prorated salaries and a look at specific documents to better understand MLB's finances. The MLBPA's forthcoming proposal may simply ignore MLB's economic proposal. Here is where it leaves baseball: https://t.co/9C7vPR1YmN

Even if you get past the question on whether owners are losing money per-game when players receive prorated pay (in which case, a longer season simply means more losses for the owners), the reason to maybe not want a longer season is that you then risk pushing the postseason into a second wave of the novel coronavirus combined with flu season. That’s when you would see the greatest risk of having to shut things back down. Since a disproportionate chunk of the league’s revenues come from the postseason, I suspect the postseason-related timeline is going to be protected at all costs. (In which the players might say, OK, so we’ll only seek 82 games at prorated pay, see problem solved! …. )