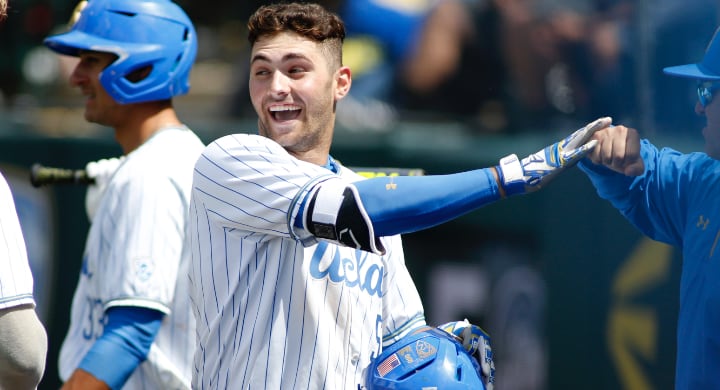 We’re just one week away from the 2020 MLB Draft, which will feature just five rounds of picks, the first by the Cubs coming at No. 16 overall. It’s their highest pick in five years.

But before we jump into the latest first-round mocks, there are a few key themes leading up to this draft, all of which Cubs fans should be aware:

(1) With school closings across the country due to COVID-19, the ability for teams to accurately scout high school players has been dramatically reduced. And as such, the perceived “risk” of selecting those players may drop them deeper into the first round than usual.

(2) This class is considered to be particularly strong in polished college pitching, separate even from the implied scouting bias in our first point.

And finally, (3) because of points No. 1 and 2, a mid-first round pick in 2020 is considered a better-than-usual position to be. Basically: a team in that position can be happy to land one of the abundant college pitchers or get lucky with a high-upside high school kid who dropped out of fear from other teams. Lucky for the Cubs.

Or maybe they stick to college bats, and take a chance on one of the high-risk, high reward types in that group …

Let’s dive in on the latest mocks.

We’ve already covered two of Carlos Collazo’s first-round mocks for BA this year, and he’s got a different pick for the Cubs all three times – first going with outfielder Robert Hassell, then righty Mick Abel, and now Austin Hendrick. The one similarity across all three mocks? They’re all high school kids.

Here’s what Collazo had to say: “This could be a coup for the Cubs at No. 16, as Hendrick is the best available player remaining in the class and brings some of the biggest raw power.”

This isn’t the first time the Cubs have been connected to Hendrick, as Keith Law picked him for the Cubs at No. 16 in his last mock. And he also isn’t the only high school position player they’ve been connected to so far. There’s also Hassell, whom we’ve discussed, and catcher Tyler Soderstrom, who’s not expected to fall past the San Francisco Giants at No. 13.

Although The Athletic’s Keith Law had the Cubs going with Austin Hendrick around this time a week ago, he’s changed his tune to another outfielder, who’s been connected to the Cubs in the past: Garrett Mitchell. Kiley McDaniel previously connected the speedy center fielder with contact skills to the Cubs, though there are concerns about a lack of in-game power.

Still … a successful college center fielder with a high contact rate and 70-grade speed is a lot to dream on. If he were to fall into the Cubs laps in the middle of the first round, I’d be very excited about his potential to unlock enough game power (juiced balls, launch angles, better coaching, whatever) to be a truly impactful player (or at least asset in the meantime).

The Cubs have had plenty of power-hitting corner prospects and plenty of high-contact prospects, but they haven’t had one of these true center field/high contact/elite speed guys in a while (well, there’s Brennen Davis, but he’s likely got more game power and less overall speed – he’s also my favorite Cubs prospect right now, so even if he’s similar … more of that, please).

And hey! Another mock connecting the Cubs to Garrett Mitchell. All told, that’s three mocks – from three different sources – picking Chicago as the landing spot (Kiley McDaniel (ESPN), Keith Law (The Athletic), and Jonathan Mayo (MLB.com) for the athletic outfielder.

But now that we have a little extra space to talk about him, let me add that the consistent messaging around Mitchell is that he’s very hard to place in the first round for the concerns discussed above. There seems to be consensus on his upside, but obviously, if the power never develops, you’re left with little more than a bench piece at best.

Now, with that said, in an era where rosters are expanding to 26-men and the designated hitter could come to the National League, I’d argue that a speedy center fielder is more valuable to big league teams in the NL than previously, but there obviously is plenty of risk.

Oh, but we should note, it’s not like Mitchell hasn’t raked so far in his college career:

Here’s each player projected to the Cubs from the mocks we’ve covered so far:

And here’s the highest and lowest each of these six players were mocked in the first round across all four publications:

Given the Cubs abilities to identify and develop hitters, and my person preference for higher-upside players (regardless of risk) in the first round, I hope the Cubs are able to land one of Soderstrom, Hassell, Hendrick, or Mitchell. Unfortunately, I have hard time seeing Soderstrom or Hassell making it to the Cubs, and there’s a real risk the other two go beforehand, as well.

Of course, if our prospect guru, Bryan, is correct the Cubs could have a shot.

Still weighing many changes, but here’s about where I’m at for a Draft big board:

And if not, there are plenty of college arms that should be worth of a mid first round selection in 2020.