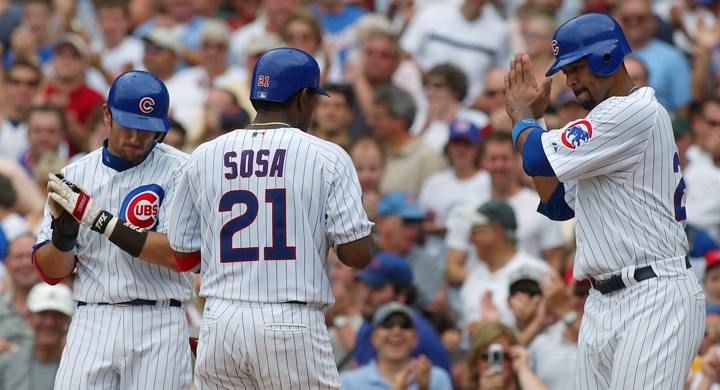 I’ve gotten stuck back in a cycle where I cannot fall asleep at a reasonable hour, so I struggle to get up at a good time, so I don’t feel good through the day, so I can’t fall asleep at night, so I … on and on. I expect it’s a cycle familiar to a lot of you (especially right now), and man it’s so hard to break (especially when you feel like you have to be on social media constantly to track baseball negotiations, and you then get constantly pulled on by the horrors you see and read). I hope I can maybe exercise myself to exhaustion today or something.

•   This is a fun set of notes from Len Kasper, rattling off some of the most impressive single months of offensive performance:

Was Sammy Sosas and his 20 HRs in June of 98’ the most impressive MLB stat of all time? @LenKasper lends his thoughts tonight on @Cubs 360 on @WatchMarquee at 7:30 CT…Tune In! @MLBBruceLevine @PeteMcMurray pic.twitter.com/g7UoH2b1hF

•   I actually do think Sammy’s 20 homers in June of 1998 is right up there as the best single calendar month feat. The only one Kasper mentions that gave me pause was Todd Helton hitting .512 for an entire month. A hit MORE than every other at bat for an entire month. That’s insane.

•   In terms of contextualizing the stats, I wish Helton had not played in Colorado, partly during the Steroid Era. The effect of those two things combine to make it very difficult to know just how good he was at the plate, were he to play, say, most of his games at Wrigley Field in an era not so marked by uncertain physiques. I mean, just consider that the guy hit .316/.414/.539 *for his career* and that was good for only a 134 wRC+ (34% better than league average). What if he was clean? And what if the Coors Effect was overstated? Or the Coors Hangover Effect understated? It’s possible that Helton was actually one of the great hitters of all-time, and we kinda can’t tell because of the noise.

•   One thing is certain, the guy never struck out, took his walks, and just hit line drives constantly. Incidentally, at Coors Field, that’s the best kind of bat you can have: spray line drives everywhere and you’ll post BABIPs in the mid-.300s, even as a big first baseman, like Helton did. We think about Coors inflating power numbers – and it does, especially back then – but really it’s just the spaciousness and the way the ball travels. It’s an incredible park for line-drive hitters.

•   This is a really good article from Travis Sawchik getting into the financial situation for the vast majority baseball players:

A problem with describing MLB's labor dispute as a fight between billionaires and millionaires is that the majority of players have netted less than $1 million in ML earnings https://t.co/vxqzpnsrQ1

All players are taxed at roughly 50%, there are union fees, etc. Scahill says if a player is a good saver, he'll save 25% of after-tax income (national average was 8% pre-COVID). At those rates, he'd walk away with $156,200 in cash savings from his major league salary …

That context is important in these negotiations as that type of player makes up the majority of the 2019 player population. When the players' camp says it is less able to take a short-term financial hit than owners, that claim has merit as these numbers detail …

To net $1 million+ from a playing career, a player typically has to exceed 3 years of service time. And fewer and fewer players are reaching that threshold. Last year, of all players to be rostered, 63.3% had fewer than three years of service …

•   As Sawchik concludes that thread, most players do have to work after their playing days, even guys who had “normal” big league careers. Scahill, for example, is now a realtor. That’s all fine, of course, but it’s a reminder that your average MLB player has a lot of reasons to fight for every dollar he can get this year.

6 years ago today, Theo Epstein and the Cubs drafted the top college bat of the 2014 draft out of Indiana….