Jasons Heyward and Kipnis Reach Out, A's Shamed Into Changing Course, and Other Cubs Bullets Skip to content 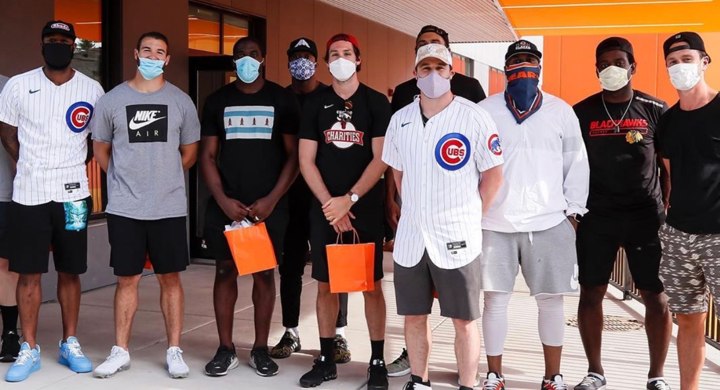 Our internet has been spotty for a week, randomly dropping and going out for just long enough to make work annoying and virtual therapy appointments for the kids impossible. Hopefully getting fixed today, with fingers crossed.

•   Jason Heyward and Jason Kipnis took part in an important effort, meeting with other Chicago athletes, the By the Hand club, and Chicago PD:

today was about coming together.. briefly discussing the PAST..addressing the PRESENT.. preparing for ways to help the ones that are our FUTURE.. it takes everyone together.. THANK YOU to EVERYONE that made today happen 🙏🏾🤟🏾 @thesamacho got us together and held us accountable! 🤝

Yesterday I got a chance to see and hear the world around me through someone else’s eyes and I’m a better man for it. Proud to have joined other Chicago athletes who are trying to learn and make a change for the better! @bythehandclub

"It's not just writing a check. It's not just sending a tweet. It's showing up. When you can invest in that way, that's when you see change made."

"The beginning of it is people being willing to listen," Jason Heyward said on ESPN 1000 this week.

On Thursday, Heyward, Kipnis and other Chicago athletes gathered with teens and members of Chicago PD to engage in an important conversationhttps://t.co/65u36LFup2

•   By the Hand’s mission: “You can play a life-changing role for the kids in Chicago’s under-resourced neighborhoods. When you help our kids become the solution, you help them rise above violence and poverty. You help them have new and abundant life.”

•   We know that public shaming of the entire league as it relates to the embarrassing inability to come to a deal doesn’t work – that July 1-4 start date now looks impossible, cheers! – but at least it did work with respect to one team’s terrible decision:

An @sfchronicle exclusive: A's owner John Fisher reverses course, apologizes: team will pay minor-leaguers; "I concluded I made a mistake," he tells me. He's also setting up an assistance fund for furloughed employees: https://t.co/8HUBkFAaBx)

•   So, then, all teams have committed to paying the $400 weekly stipend to minor leaguers through June. What happens after that is probably tied to the negotiations about a season taking place, but it is still the right thing – regardless – to take care of your minor leaguers at least through what would have been their regular season (August).

•   Fun thread on Twitter from the Cubs Director of Hitting:

Hey all – long time, no thread. Here is a good visual analogy of why a “short swing” is more admirable than the inconsistent “exit velo” guy. I pic.twitter.com/9rwR8sxGR7

•   Bedding, soap, and more are your Deals of the Day at Amazon today. #ad

•   Something nice and positive and light and happy:

My son got the spider man costume he's been wanting forever today. I held him up in various positions and then photoshopped myself out. Turned out pretty good! pic.twitter.com/aEqYEdSVhf