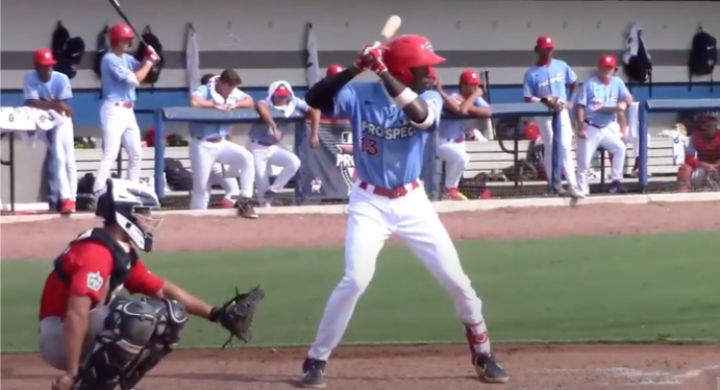 With their highest draft pick in five years (16th overall), tonight the Chicago Cubs selected 18-year-old shortstop Ed Howard. It’s the first time the Cubs have picked a high schooler in the first round since Albert Almora back in 2012.

Howard, an Oklahoma commit, is going to get most attention locally for being, well, local – he’s a high school product of Mount Carmel High School in Chicago. That’s fun. You don’t draft a kid because he’s local, but man, it sure makes for a really great story when it works out that way. Maybe it’s a good tiebreaker. Maybe it makes him more signable than most of the high school seniors this year.

Remember the Jackie Robinson West team that went to the finals of the 2014 Little League World Series out of Chicago? Ed Howard was the starting shortstop.

Although it’s been uniquely challenging to separate players in this draft because of the (mostly) lack of a season this year and extremely limited scouting, it is also a very deep draft in the guys who would be justified as a top 20 pick, and Howard is in that group. He ranked as high as 11 (FanGraphs) and as low as 20 (BA), but most had him ranked right around the Cubs’ pick. Still, this year, it’s quite bold to take a high schooler, so the Cubs are absorbing risk for upside here.

The super short version is that Howard is viewed as a true shortstop, who is going to stick there defensively, and could be quite good. The bat is where you have to buy into projections and player development. But you get him there, and and a plus defensive shortstop with a good bat? That’s a star. And that’s the upside you dream on.

From FanGraphs on Howard:

Perhaps he would have come out of the 2020 blocks having already filled out and showing more raw power, but Howard answered most relevant questions the previous summer when he performed against the best high school pitching all summer on the showcase circuit. That pitching is much better than what Howard would have seen in Illinois this spring. Howard best squares up pitches at the bottom of the strike zone, and although he hasn’t been tested regularly at the letters, he’s shown flashes of being able to either lay off those pitches, or pull his hands in and find a way to get the barrel there, and even to catch that high pitch way out in front of the plate and hit it in the air to his pull side. Whether Howard is able to fo that against big league velocity is tough to predict, but he has promising feel to hit and an advance approach for a cold weather hitter, as well as perhaps the best defensive footwork in the entire class. He projects as an everday big league shortstop.

Howard has blossomed into the best prospect at his position in the 2020 high school class. He may not have the lofty ceiling of Bobby Witt Jr. or C.J. Abrams, prep shortstops who went in the first six picks of the 2019 Draft, but he’s a steady player who could have solid tools across the board. He’s set to become the first Illinois high school position player to go in the first round since Jayson Werth in 1997.

Using a simple right-handed swing and a calm approach, Howard makes repeated hard contact. He has impressive bat speed and a projectable 6-foot-2 frame that continues to add strength, so he could develop average or better power. He has solid speed and uses it well on the bases.

A smooth defender at shortstop, Howard definitely will be able to remain at the position. He can make all the plays with athletic actions, quick hands and a strong arm capable of making throws from a variety of angles. The Oklahoma recruit has a high baseball IQ and a knack for slowing the game down on both sides of the ball.

Howard is one of the few true shortstops in the draft class at either the high school or college level, and that alone makes him at least a top two rounds guy, while the upside in his bat is probably going to make him a first-rounder. Howard is very projectable at 6-foot-2, 185 pounds, and is an above-average runner with very good hands, giving scouts no doubt he’ll stay at short in the long term. His bat speed is excellent and he rotates well for future power as he fills out. Howard did struggle at the end of the summer of 2019, and we don’t know if that was due to a sore shoulder or fatigue or just trouble with better competition — and he didn’t get to play this spring to answer any of that. In a draft with more polished shortstops, he might slip to the supplemental round and end up an overslot guy, but this year he seems likely to go somewhere in the back half of the first.

Howard is the top prep shortstop in a light high school class at the position and midwest area scouts should have good history with him considering he played alongside D-backs’ second-round pick Alek Thomas (2018) as an underclassman at Mount Carmel (Ill.) High. Howard wowed scouts as a junior in Perfect Game’s Jupiter WWBA tournament, showing high-level ability on both sides of the ball. While he has upside as a hitter, the polished part of Howard’s game comes from his glove. He’s a no-doubt shortstop at the next level as a solid athlete with reliable hands and a strong, accurate throwing arm. He moves fluidly in the middle of the diamond and has the ability to throw from all angles with excellent body control and a solid internal clock. In the 2020 class, he’s the clear-cut top prep defender at the position and has the potential to be a plus defensive shortstop in the big leagues . The one critique in his defensive game is that scouts would like to see better foot speed. He’s a solid runner, but not a burner by any means. Scouts will have to project more on Howard’s offensive game, particularly after not seeing him in games this season. He shows all the tools you want to see, with good bat speed, some bat-to-ball skill and a lithe, 6-foot-2, 185-pound frame that has plenty of room to add more muscle and impact ability. At present he’s more of a gap-to-gap, line-drive type hitter, but scouts want to see him refine his approach. He did a nice job of progressing throughout the summer in 2019 and showing he can make adjustments, but teams are still waiting for him to put it all together. While he is committed to Oklahoma, it’s rare for the top high school shortstop to not go in the first round, and a team that buys into his upside could jump on him in the middle or back half of the first round.

And some video for your enjoyment:

Much, much more coming on Howard.