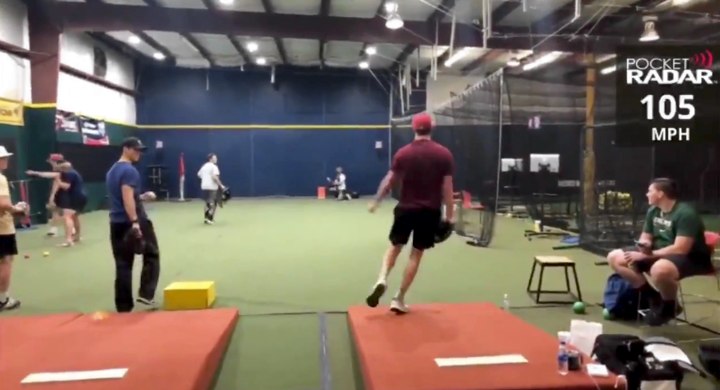 The Cubs have drafted a high school shortstop, a college reliever, a college outfielder, and now a junior college lefty whose name might look familiar to you if you’re a prospecting nerd: Luke Little.

Ringing any bells? No? How about this:

Little, who is 6’8″ 225+ lbs, is a physical beast, with an obviously enormous arm. Are there huge question marks about his control and role going forward? Of course. But you’re not going to find a raw gift like that in the 4th round too often, so I am freaking stoked that the Cubs jumped.

Rankings wise, Little was right around the 150 range to FanGraphs, MLB Pipeline, and Baseball America (Keith Law ranked only to 100). He’s committed to attend South Carolina next year, and since he’s got options there, I wonder if he’ll cost a little above slot to sign out of that commitment.

The write-ups, as always, are very useful, but Little is pretty exemplary of a guy who was hurt by the lack of a season this year. Based on his 2020 development work, he may well have added significantly more velocity this year than the previous reports had him.

Sits 93-97 and hits 99, slider flashes above and he’s a 6’8 lefty, but is a relief fit and the command lags well behind in part due to his size, long arms and long arm action.

San Jacinto (Texas) JC has produced 18 big league pitchers, most notably Roger Clemens and Andy Pettitte, as well as Nationals 2019 first-rounder Jackson Rutledge. The Gators’ three best arms — right-hander Brandon Birdsell and lefties Little and Mitchell Parker — all could fit in the first five rounds this year. Little tweaked his back after his first start in February and missed four weeks, then came back to make four relief appearances before the season ended early.

Little has the highest maximum velocity of any southpaw in the 2020 Draft and created buzz when video surfaced of him hitting 105 mph in an indoor workout in May, though he tends to work at 93-96 in longer outings. He has made progress with his secondary pitches but they still need more work. His low-80s slider is his No. 2 option, and he also has come up with an upper-70s curveball and a nascent changeup.

Little has gotten in much better shape this season, dropping 30 pounds from his massive 6-foot-8 frame and doing a better job of repeating his delivery in limited action, though scouts still don’t care for his arm action or mechanics. He tallied 86 strikeouts versus 39 walks in 44 1/3 innings in two years at San Jacinto, and it’s difficult to project him as more than a reliever who can air out his fastball in short stints. If he doesn’t sign this summer, he’ll pitch at South Carolina in 2021.

Little is one of the hardest throwers in this year’s draft class, but until this year his wildness was just as notable as his fastball. As a freshman, Little walked more than a batter an inning (while also striking out 17.6 batters per nine). In brief glimpses this spring (nine total innings), he showed vastly improved control, although his delivery is still herky jerky and effortful. Little pitches at 96-97 mph, but has touched 100 at his best. He only made five appearances before San Jacinto’s season ended because he missed a few weeks with a back injury. He made one start before the injury, then pitched in relief four times upon his return. In those five appearances, Little struck out 17, walked three and allowed three hits in nine innings. A massive presence on the mound (6-foot-8, 250 pounds), Little was in better shape as a sophomore and showed better control and command. In part that came from better body control and in part because he synced up his lower half better in his delivery. He also showed a much better feel for locating his above-average 80-83 mph slider. It has less power than may be expected, but it has solid bite, although its spin rates are not exceptional. Little is a South Carolina signee. He would have benefitted from a full season which would have given him time to show his control improvements are sustainable, but a team looking for a power lefty could be enticed by his two-pitch package with the hope that there is more refinement to come.