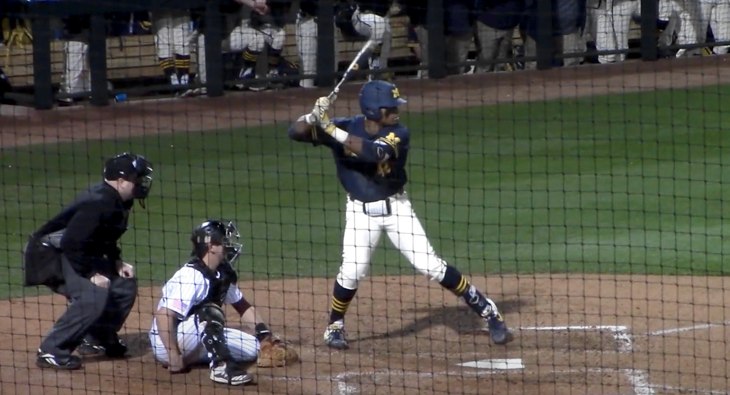 The Cubs went top prep shortstop in the first round, top college reliever in the second round, and now grab a big power bat out of the University of Michigan, Jordan Nwogu, with their third round pick (88th overall).

A two-sport athlete in high school, Nwogu apparently had the opportunity to play D-1 college football but instead opted for baseball at at home in Michigan. He’s a huge power guy with big exit velocity, and is well built at 6’3″, 235 lbs. Kind of an odd looking swing, but you’ll have that sometimes. He takes his walks and has good speed.

And he got results so far in college, though the Big Ten isn’t quite as competitive as some of the other major baseball conferences:

Nwogu has played center field, but some questions about the arm might take him to left field, where obviously the bat really has to play up.

The range of pre-draft rankings on Nwogu were as high as top 70 from Keith Law, and as low as just inside the top 200 at Baseball America. As a major college player, he’s relatively well-scouted, so it’s just one of those your-mileage-may-vary questions about whether the funky swing is a big problem, and whether his likelihood to move to left field is a problem.

Big time raw power, a left field fit as more of a plus football-type athlete than baseball. Nwogu is still a bit raw in pitch seletion but has round one potential.

He was the Wolverines’ best offensive performer in 2019, when they surprisingly finished second at the College World Series, and again this spring. One of the most physical players in this year’s Draft, he offers more offensive upside than former Michigan outfielder Jordan Brewer, an Astros third-rounder last June.

Nwogu packs prodigious strength in his 6-foot-3, 235-pound frame and generates impressive exit velocities, showing the ability to crush fastballs out of any part of any ballpark. He has an unorthodox but quick right-handed swing and his lower half seems out of sync with the rest of his body, but his impressive hand-eye coordination makes it work. He controls the strike zone reasonably well but still has to show he can make adjustments to handle breaking balls and changeups.

Nwogu has plus speed and runs the bases aggressively. His quickness doesn’t play nearly as well in the outfield, where he doesn’t get good jumps and struggles going back on balls. His arm strength has improved in college but is still fringy, so he’ll likely wind up in left field after playing center this spring in place of the injured Jesse Franklin.

Nwogu is one of the higher-upside athletes in the college class this year, a plus runner with plus raw power, but in many ways is still raw like a high school prospect. He has a very wide setup at the plate with no stride, which doesn’t help at all with pitch recognition, so he rakes against fastballs and struggles with spin. He’s fast enough for center field but doesn’t have the instincts or arm for it, and almost certainly has to play left. Ultimately his value is in his bat, where he has bat speed and strength but just has to pick up secondary stuff far better in the future. Perhaps narrowing his stance and giving him some forward momentum will help. He’s shown a willingness to walk and there’s at least 20/20 potential here if he gets to the power.

A straight-A student in high school, Nwogu had Division I offers as a defensive end/linebacker, but he opted to go to Michigan on an academic scholarship to study computer engineering and play baseball. Nwogu earned a starting role midway through his freshman season and has been Michigan’s leadoff hitter for the past two years. Nwogu still looks like a football player (6-foot-3, 225 pounds) and he has plus-plus raw power and plus speed. Scouts are not all that excited about his funky swing—he gets good weight transfer and has plenty of bat speed, but it’s a very top-hand heavy swing. So far, funky or not, it has been extremely effective. He is a career .334/.430/.545 hitter for the Wolverines and his ability to control the strike zone has improved dramatically over his collegiate career. Nwogu’s defense was rough as a freshman, but he has steadily improved. He likely ends up in left field thanks to his below-average arm. That’s where he’s mainly played for Michigan, but the Wolverines started to play him in center field this year.