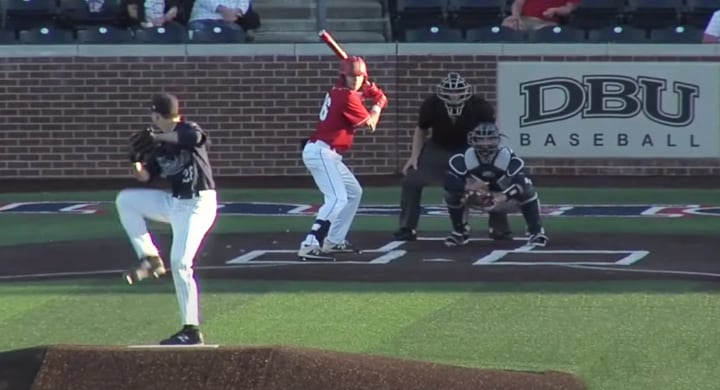 At a high level, the Cubs first two draft picks from 2020 look like completely different players. The first, Ed Howard, is a high-upside, long-developmental-time high school shortstop, with a shot to be an everyday player or better … in about 4-5 years. The second, Burl Carraway, is pure college reliever (until the Cubs say otherwise), so maybe the upside isn’t quite as high, but neither is the risk. With substantial (but plausible!) luck, he could be pitching in the majors *this season* should the Cubs need it. Different levels, different positions, different timelines, different upside.

But these two new Cubs prospects have more in common than the letter on their caps. As far as I can tell, they’re both absolute baseball rats.

And that’s not just something I’ve drummed up. The first thing Dan Kantrovitz noted about Howard was the fact that he was wearing his glove during their Zoom meeting and what that told him about his love for the game. And so far, I’m getting similar vibes about the Cubs second round pick, from Carraway’s head coach at Dallas Baptist University:

Dallas Baptist head coach Dan Heefner remembers the shock players went through when the 2020 season was cancelled. He said image of Burl Carraway staring at the field after getting the news sticks with him.

"He would've rewritten our record books."

Rewriting the record books aside, I feel like I can visualize a kid standing on the top step of the dugout, staring at the field, quietly stirring that he’s not out there pitching at that exact moment. And you might sit there thinking every player of his caliber is as obsessed with the game as he seems to be, but I’d argue that there’s always a last man on the field, a guy who can’t take off his glove for a meeting, or the kid who gets an MLB tattoo on the back of his neck. They’re not all superstars, but some players love the grind of the game more than others.

Carraway is one of them:

“If he didn’t have somebody to work out with, he was long-tossing on the field with a bucket by himself. He’s a pretty impressive guy.”

And if the Cubs followed that principle in determining whom to select in this draft, then their first two picks will have one very important thing in common.

But there’s a lot more to Carraway than that, of course. For one, his coach was surprised he didn’t go even higher in the draft (another thing he shares with Howard), given the ratings on his fastball and curveball:

“It’s shocking that he didn’t go higher than he did, because with the Trackman data they have today, where you can compare guys to everybody across the country, I’ve heard several organizations say that his fastball and his breaking ball graded out the best in the whole Draft.”

Both his fastball, which sits at 93-96 MPH (and touches 98-100 MPH) – and his curveball have been called “overpowering” and “explosive pitches” nearly ready for the big leagues. And the heater, in particular, comes in for a potential 70-grade (which is *very* high) if he can control it a little more (remember – this is a 6’0″ southpaw with a funky delivery, who gears up to max effort).

But to just to really drive this point home, here’s his fastball ranking 3rd among college pitchers in the draft … the two guys ahead of him went 3rd and 11th overall.

Chicago just got the pitcher (Garrett Crochet) with the best fastball in the draft, according to the MLB scouting departments we polled. #WhiteSoxhttps://t.co/MXfEmdpb9a pic.twitter.com/c8Tqiqzlt7

So what does this all mean? Can Carraway, 21, really pitch in the big leagues this season? Well, he didn’t have a full season this year, so he could easily still have bullets left, but it sort of depends on what the Cubs have in store for him.

You already know that his fastball grades out as one of the best in the country and his curveball is a plus pitch, as well, so if he were to stop there he probably could be the sort of guy that comes up this season in a pinch or very early next year, as needed: “He could end up being a fast mover,” vice president of scouting Dan Kantrovitz said. “He’s got an upper-90s, explosive fastball that’s comparable to some of the better big league fastballs today.”

But if the Cubs have their sights set on the rotation, they might wait for him to develop the ability to sustain velocity much longer and repeat his mechanics consistently. Also, gonna need that third pitch, a slider, to develop – a pitch suggested to him by a very interesting source:

Just chatted with Burl Carraway (Cubs' second rounder). He had a chance to pick Clayton Kershaw's brain once. Kershaw suggested working on a slider, which Carraway started in January.

He was thrilled to be picked by the Cubs: "The room erupted. It was pretty cool."

Also working in Carraway’s favor (for a fast rise through the system) is his apparent openness to the Cubs way of doing things. One of the first quotes from him immediately after the draft was inadvertently complimenting the Cubs pitch lab: “I knew that they were just a top-notch organization,” Carraway said on Thursday night. “Not only in the way they go about their business, but being ahead of the curve with technology and data and things like that. So I knew that that was going to be a good fit.”

The issue, of course, is how the Cubs are able to ramp players up to speed with limited abilities to meed in person and, well, no minor leagues to attend.

Kantrovitz fielded that question, with respect to Carraway, at The Athetlic:

“It’s a question that you can imagine we get asked quite often by the players,” Kantrovitz said. “It’s clearly a fluid situation right now.

“Whether it’s remote development, whether it stays together in small groups in certain locations, I think that process is still being mapped out. It’s more just ‘to be determined’ at this point. It wouldn’t make sense for me to speculate what it looks like without having all the details there.

“What I can say is I think we’re uniquely positioned to continue to work with players remotely (if) that’s through our player-development app (or) the various tools and technology that we have to keep up.”

My gut read on it? We won’t see Carraway this season.

MAYBE if the Cubs were in contention, and MAYBE if everything broke just right for Carraway in terms of ramping up quickly, identifying some ways to be a little more consistent with his control, etc … I could see him pitching in the big leagues this season. But it’s so rare, for good reason, that I’d bet against it.

Then again … I never would’ve thought Nico Hoerner would be fielding grounders at Wrigley Field after just 375 minor league plate appearances, so who knows?

Either way, the Cubs have a potential fast riser with plenty of upside. And he sure seems geared up for more baseball: “I’m fired up to be where I’m at,” Carraway said. “I’m ready to roll.”