Deeper Dive: Each of the Cubs Day 2 Picks Is Loaded with Upside Skip to content 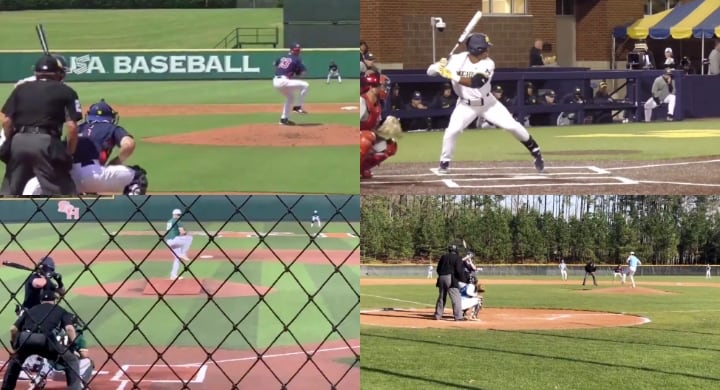 I’m tempted to write about the 2020 Draft as a complete philosophical left-turn for the organization. It fits the narrative of a new scouting director, and it’s kind of what we were asking for. But I’ll be honest, there are a lot of similarities to 2019.

I think, at some point over the last couple of years, the Cubs decided that they needed to place a higher value on upside, and 2020 was just another step in that direction. Both drafts have high-end high school players at premium positions (Howard and Hearn), college relievers that touch 100 (Carraway and McAvene), and North Carolina projectable high school pitchers (Herz and Moreno). The 2018 Draft was loaded with high upside prep players (Davis, Roederer, Franklin), as well.

While I do believe Kantrovitz brings his own style – and certainly his own set of preferences and biases – he was still hired by the same guys that have strong and intelligent baseball beliefs. It’s the collaboration – between all of them, and between the scouting side and the revamped player development side – that is needed for the organization to again be among baseball’s best at producing impact big leaguers.

With all that in mind, let’s hit on each of the Cubs’ Day 2 picks, to get a better sense of this class, and all the upside the Cubs have acquired.

Best asset: The best 2-pitch mix in college baseball. Seriously, this is what Trackman tells us. Carraway was 96-98 mph consistently with a fastball that gets a lot of swings and misses in the zone. Carraway pushes off the rubber like he’s coming at the batter, and with elite extension I think the ball feels even faster than high 90s to a hitter. To back that up with this curveball is unfair.

Development area for Cubs to focus: How do you tinker with the delivery in a way that will improve control without sacrificing any of the deception that helps make him successful? I do notice that, at times, Carraway’s delivery in the DBU videos show a little more violence and head whip than in the Team USA videos. Finding a way to maintain the highest end of his velocity and curveball snap without putting pressure on the arm and neck muscles will be the priority.

Stat factoid: Carraway was a little sloppy in his first two outings this year against South Dakota State and UT-Arlington, where he gave up three hits and three walks. In his final six appearances (three against Power 5 schools), Carraway went 6.1 innings with two hits, a run, three walks (all in one appearance) and 14 strikeouts. In those six games he threw 117 pitches with 22 swing-and-miss strikes.

Development schedule I’d expect: While we’ve heard a little “I think this guy could pitch in the Majors this year,” I’m not sure the command is in a place where that’s a good idea, especially without a spring season. I do expect him to go to play in a Fall League this year, and his performance will probably help dictate where he starts in 2021, be it High-A or Double-A. If the Cubs are a successful 2021 team, and Carraway is a dominant 2021 minor league reliever, we can’t write him off as one of the 2021 September call-ups.

There’s a similarity between the two relievers the Cubs have picked on Day 2 the last two seasons. I can’t quite put my finger on it. (Hint: turn your sound on) pic.twitter.com/O9GIWb8U1Y

Best asset: This combination of brute strength and surprising athletic agility is rare for the baseball diamond. Nwogu crushes baseballs that he barrels up, and is just tapping into power that can be special. He’s also consistently produced results on the diamond, even while changes were being made to his swing behind the scenes. He’s a smart and passionate guy that takes to coaching well. This was a consistent theme all draft.

Development area for Cubs to focus: Finding a swing that best allows him to access his power. Michigan is a fantastic baseball program, and they clearly worked on Nwogu’s swing over the years, as you’ll see below. That final swing in the video is so different than the rest (he deliberately loads up, transfers so much more weight, and his contact point is much better). I think the Cubs are probably excited about those changes … while also having a few more things in mind with which they can tinker. I think the connection from his lower body/hips to his upper body/hands still could use improvement, as I broke that last swing down frame by frame. I’d expect a higher loft angle to be a goal, as well.

Here are some swings over time from Jordan Nwogu, borrowed from our friends @TheProsPipeline @d1baseball @2080ball @tedcahill. The first two from 2019. The third from Feb 2020, the last from Nwogu’s final weekend. Lots of changes to set-up and load, clearly takes well to coaching pic.twitter.com/HctcKasm51

The Cubs invested a lot in building a hitting program, with coaches meant to carry out technical analysis. Nwogu will be a great test case for that department.

Stat factoid: Despite a pretty difficult non-conference schedule before the shutdown, Nwogu was showing real improvements in his contact rate. After striking out in 21% of his at-bats in 2019 as a sophomore, Nwogu struck out just 11 times in 68 at-bats (16%) in his shortened spring.

Development schedule I’d expect: I’d expect Nwogu starts in Low-A next year, with the hope that he hits enough to finish the season in High-A. But the instruction that he receives, and the development of those changes, will dictate if maybe he can skip the South Bend stop up the ladder.

Best asset: Little’s game is built around his physicality, a 6-foot-8 frame that has traded a lot of heaviness for muscle with his hard work over the last year. While the 105 mph fastball gets all the attention, it hides that it’s not possible for Little to have added 20 mph to that pitch in a few years without some real work ethic.

Development area for Cubs to focus: I think the focus on Little will be on fluidity and flexibility, for injury prevention if nothing else. You can see in his delivery how he really rears back and loads up before unleashing the heat. I think the Cubs will look to clean that up, while continuing to build the tunnel between his fastball and slider. I believe the Cubs will continue to try Little in longer outings, so getting the third pitch (be it his curveball or changeup) to above-average will be a huge priority.

San Jac lefty Luke Little with a clean inning of relief. Obviously gigantic, tons of angle to the plate, fastball sat 95-97 with one 98 on my gun, worked both sides, SL 80-82 with good bite. Extremely tough on lefties especially. Loud. #MLBDraft pic.twitter.com/cAdQl4fCmV

Stat factoid: After returning from injury, Little made four relief appearances before the shutdown. He faced 16 batters during that time and struck out 11 of them. He gave up zero hits and one walk.

Development schedule I’d expect: My guess before talking to Cubs insiders is the Cubs will first try to develop Little in longer outings, possibly as a piggyback starter in South Bend. The move to relief, if necessary (and I think most will acknowledge it probably will be) can come down the line. I’d also expect the Cubs look to get Little innings in the less advanced of the two Fall Leagues that have been talked about for 2020.

Best asset: Athleticism, athleticism, athleticism. Moreno is a three-sport athlete (basketball and track) with not as much baseball experience as many of his peers, and I think that’s probably what excites the Cubs the most. He’s muscular but has room to grow, is really fluid with natural arm speed, and spins the baseball really naturally.

Development area for Cubs to focus: I’m tempted to say everything. I think the Cubs will work on building his body into a baseball body, with the hopes that it might add a few ticks to the fastball. They will work in The Lab on finding the right breaking ball. After time, a change up will be added. It will be a slow process, but these are the types of projects that can have big rewards.

Stat factoid: We don’t have much, but Jordan gave us this nice snippet:

Development schedule I’d expect: We don’t know what short-season baseball will look like moving forward, but I’d expect that Koen will be there in 2021, likely at the Arizona complex. Results will determine how fast he moves, but I’d expect one level per year at least at the beginning.