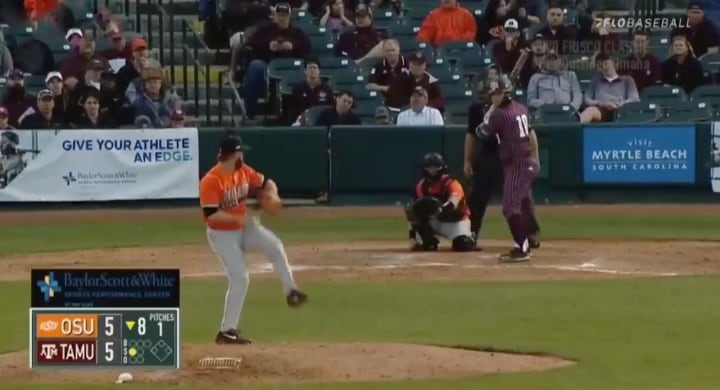 One of the most unfortunate *baseball-related* casualties in the on-going fight against COVID-19 was the length of the 2020 MLB Draft. As Brett pointed out earlier, the tiny 5-round event left a whopping 75 of MLB Pipeline’s Top 200 draft prospects unsigned. And unfortunately, while they’re all still able to begin their professional careers as undrafted free agents, they’re able to sign only for a maximum of $20,000 – a pittance compared to what many would’ve normally received.

Unfortunate, unfair, disappointing, or not, the Cubs, like every MLB team, must still take advantage of the players they can add to their system while they can, and indeed have already signed Baseball America’s 438th best prospect, Bradlee Beesley:

They’ve also signed several others, which we’ll discuss below. There’s not much out there on many of these players – I’ve gathered what I can – but I’m sure we’ll get to know them more along their journey to the big leagues.

McKeon, a 22-year-old shortstop out of Coastal Carolina University, was selected by the Tigers in the 21st round last season after an impressive 63-game season, during which he slashed .340/.399/.484 with 18 doubles, 5 triples, and six stolen bases. And he was off to an even better start this year, when the season was canceled (stats via Baseball-Reference):

Here’s what BA had to say about one of the Cubs newest prospects:

McKeon began his career at Brunswick (N.C.) JC, where he led the team in hitting with a .434 average as a freshman before hitting .339 in his sophomore campaign. His hitting ability translated just fine to Coastal Carolina and the Sun Belt Conference, as McKeon managed a .344/.407/.500 line in 79 games over the 2019 and 2020 seasons. Teams were interested in McKeon last year—the Tigers drafted him in the 21st round—but he returned to school for his final season and would have been a priority senior sign in the 5-10 round range in a normal year. Scouts see McKeon as a solid defender at shortstop and think he can stick there but have questions about whether his bat and offensive approach will translate to the pro game.

Kobos, a 22-year-old lefty, was McKeon’s teammate at Coastal Carolina, but didn’t make it onto Baseball America’s top-500 this year. The southpaw comes in at 6’2″ and 200lbs, and has some relatively underwhelming stats for his college career:

Kobos was drafted by the Indians in the 38th round of the 2017 draft, but chose to stay at school. There’s not much out there on him, but the Cubs obviously saw something they liked. Hopefully, we’ll have more on him in the near future.

Lawson, 24, is a right-handed pitcher out of the University of South Carolina, who was drafted by the nationals in the 12th round of the 2018 MLB Draft. He didn’t have much success as a reliever in 2017 and 2018, but made six solid relief appearances this season (1.50 ERA) before the season was shut down:

And although 6.0 innings is REALLY a nothingburger sample, there’s at least one reason to be optimistic about the improved results. In 2019, Lawson underwent Tommy John surgery, and has clearly rehabbed successfully. That’s not to say you should expect much out of an undrafted free agent reliever, but there is at least a reason for the 5.00+ ERA in his first two years.

Ben Leeper, 22, turns 23 tomorrow … so Happy Birthday! And welcome to the Cubs organization. The righty is yet another reliever taken by the Cubs this draft/UDFA season (perhaps Dan Kantrovitz has a type?), with a little longer track record to dig into:

He also did not allow an earned run over his first 15.1 innings pitched last season.

@PitchingNinja 7.1 innings 14k .083 BAA. Will be joining the bullpen challenge this week pic.twitter.com/NcVEGHutP6

@OSUBaseball thank you for all the memories. @Cubs Time to get to work #FlytheW pic.twitter.com/ZrJVsYt7OE

Although he’s not yet listed on BA’s UDFA tracker, Angel Gonzalez has also reportedly signed with the Chicago Cubs for the $20K maximum:

Looks like the Cubs have also signed Angel Gonzalez, a high schooler out of Puerto Rico. He popped 94 MPH off the mound in a showcase event last year

Gonzalez, 17, is a lanky 6’1″ 168lb righty with a 94 MPH fastball, and here’s a 2018 scouting report I was able to drum up on him from Perfect Game, though note it is obviously a little dated, given the reported fastball velo:

Angel Gonzalez Martinez is a 2020 RHP/OF with a 6-1 168 lb. frame from Corozal, PR who attends Emilio R Delgado School. Tall, lanky frame with athleticism and lots of room for additional strength and physicality. Primary righthanded pitcher who only threw during the event. Small side step into a high leg lift. Longer stride down the mound with good extension. Stays online through the delivery and doesn’t have much effort at release. Long, loose arm stroke with requisite arm speed and whip through the zone. Slow-paced delivery towards the plate and stays tall over the backside into drop and drive mechanics. Attacked hitters with fastballs that topped out at 87 mph. Fastball flashed some arm side run and threw mostly fastballs while mixing in a couple of changeups.

At his age, if he’s already throwing 94 MPH, it’s not hard to understand what the Cubs see in him. Ideally, he’ll keep growing (heigh and weight) and could add a couple more clicks to the fastball, as he works to develop his other pitches.