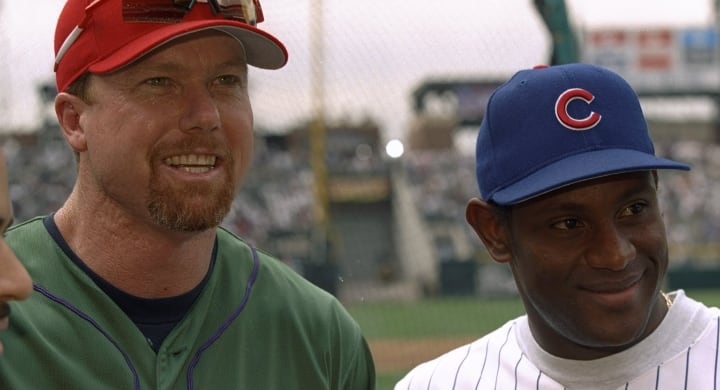 After months of build-up – and years of waiting, actually – the documentary tale of the 1998 home run chase was told last night in ESPN’s ‘Long Gone Summer.’

For so many reasons, it was disappointing. I’m not even sure it made it to the warning track.

•   Of most notable import to Cubs fans, what was promoted and teased as a documentary about Mark McGwire AND Sammy Sosa was, in fact, really just a documentary about McGwire. Sosa existed in the documentary to serve only as a spark to push McGwire, with vague references to a team rivalry, to Sosa having been a Major League Baseball player before 1998 (he was kinda good), and to the kisses-to-momma, which were Sammy’s hallmark … yet McGwire is seen doing literally five times over the course of the one and a half hours of footage. The documentary was about McGwire’s history, ability, story, and efforts to overtake Roger Maris. That’s the chase that was on display, not the captivating two-player race we all remember.

•   And, to be frank, even when viewed through that lens, the doc was a mess of random cuts, hanging storylines, non sequiturs, love letters to Cardinals fans, and nearly five minutes spent on a single McGwire ejection. The story, if you didn’t already know about the key players and the year, would have been impossible to follow. It was 2 hours (with commercials) of … what was that?

•   Also, there were constant bizarre things like this (thanks to Sara for grabbing this shot, in which I also could have circled the bullpens, the ivy, the extra areas in the bleachers …):

•   We’ll have more on the documentary as it relates to Sosa and the Cubs, but as far as going back and thinking on what it achieved or didn’t? It really did almost nothing to capture what 1998 was actually like, so I’m not sure it’s worth hanging on this particular documentary for more than a set of Bullets. Maybe someday Sosa and the Cubs will reunite, and Cubs Productions can put together a more worthy piece …

•   This is some great news on the scouting front:

Source: MLB just informed clubs that they can begin scouting amateur events again, max of 3 scouts per club per event. Perfect Game National begins the summer showcase circuit for 2021 draft prospects on Wednesday in Birmingham, AL. Great news for scouts getting back to work.

•   Cubs shortstop Zack Short had it DOWN:

In honor of the ‘Long Gone Summer’ special tonight, here is me doing my best Sammy Sosa impression pic.twitter.com/QRWhMnyGIx

•   Also, Sammy was extremely fast as a prospect:

Throwback to 1989 & Sammy Sosa hustling for an inside-the-park homer with the @TulsaDrillers pic.twitter.com/k1VRwMHRDZ

•   This is some AWESOME archival Fergie Jenkins footage:

•   Heads up: Joe at Obvious Shirts said he’d do 30% off all orders if anyone spotted an Obvious Shirt in the documentary (which SHOULD have been a safe offer, given that they have been around only the last four years, but hey, stock footage). And there it was: