Rob Manfred: "This Needs to Be Over" Skip to content 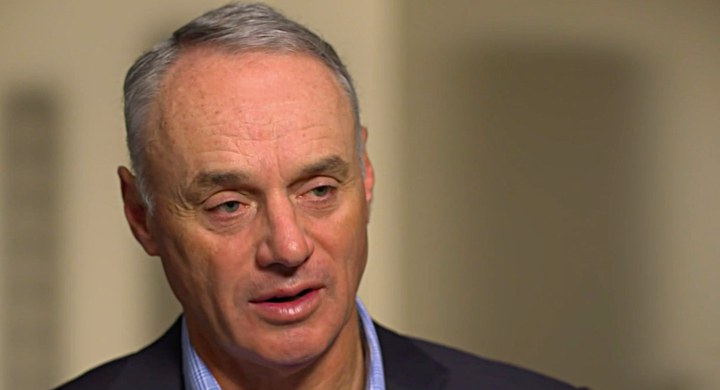 I say it now, but somehow I keep fooling myself. Three months of fighting about what the parties meant by the very words in their March Agreement, and yet I still haven’t learned that the relationship between MLB and the Players Association is so fundamentally damaged that they will absolutely never actually agree to something unless it’s signed, scanned, and posted for everyone to see.

That is to say, when we learned of a face-to-face meeting this week between Commissioner Rob Manfred and Union Chief Tony Clark, no matter how much it SEEMED like they’d made some actual progress on the “framework” for a deal, we should have safely assumed that each side would have its own interpretation of what happened. And we should assumed the worst version of that.

Because that’s what has happened.

By all outside accounts, it seems each of Manfred, Clark, the owners, and some player agents all had different understandings of what actually happened this week. Manfred seems to think he and Clark basically agreed to the rough contours of a deal. The owners – some of them, at least – seem to have thought Manfred and Clark agreed to a FIRM deal. Clark, by contrast, seems to have thought the two were close to a deal and the owners were making an official proposal, but there was a little more negotiating to do after a counter-proposal. And lastly, some agents seem to have thought this was all just more opportunity for hard-line negotiating.

Nobody agrees on anything. So even where it looks like these expert negotiators are just 10 games apart from a deal, it’s probably a significantly larger gap than that, particularly when you realize there aren’t actually just two sides to this negotiation.

Which means everyone is back to where they were a week ago, with the owners maybe just imposing a short schedule and facing the specter of a grievance, pissed off players, and apathetic fans. Or worse, 8+ owners get their way and just cancel the season entirely, because they don’t care about anything more than the bottom line in a single year.

It is, to quote Rob Manfred long before we even got to THIS point, a disaster.

Some of the latest:

MLB’s main goal remains to reach agreement with players, but Manfred is continuing to talk with owners before deciding their next move. Time is short he acknowledged. “This needs to be over. Until I speak to owners I can’t give you a deadline.”

Manfred says he went to Arizona to make a deal with #MLBPA director Tony Clark, denying it was only a proposal: “I don’t know what Tony and I were doing there for several hours going back and forth and making trades if we weren’t reaching an agreement.”

Commissioner Rob Manfred: "We’re at the same place. We want to play. We want to reach an agreement. …We're doing everything necessary to find a way to play, hopefully by agreement.''

Note that last one: so even by Manfred’s own admission, there was no firm deal. It seems the owners just don’t like that the players asked for 70 games, rather than … what, 66? I mean come the eff on. What are we even doing?