Players Step Back from Financial Proposals to Evaluate Health and Safety Protocols (UPDATES: Still Trying to Agree?) Skip to content 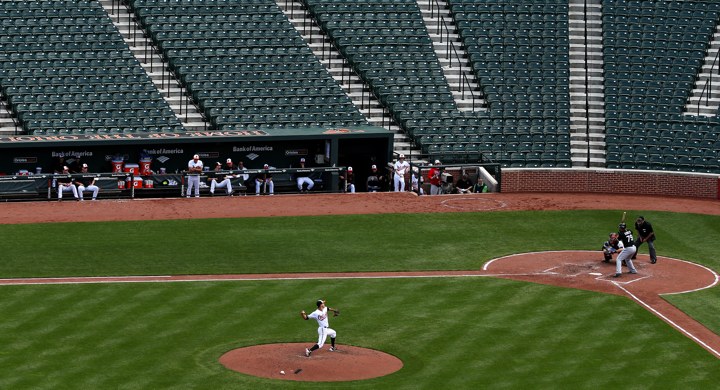 With so much of the focus on the financial aspects of making a deal, while also knowing all the while that the sides would have to agree on health and safety protocols even before a mandated season could happen, it was only a matter of time before the two issues became explicitly connected.

Now, under the specter of increasing COVID-19 cases in hot spots around the country, the MLB Players Association is going to delay making a firm decision on the owners’ last proposal of 60 games (plus no grievance rights and modest postseason compensation) while more work is done to understand – and probably shore up – the health and safety protocols associated with trying to play through this pandemic.

The players will delay taking a vote on #MLB’s 60-game proposal for several days while gathering information on the safety and health protocols in light of all spring training camps being shut down because of the rash of COVID-19 positive tests.

This is extremely reasonable. Yes, it delays the process even further – something the players had been accusing the owners of doing intentionally to shrink the season – but if the players want to make sure the health and safety protocols are PERFECT before they agree to anything else, then I have no problem with that.

Moreover, you have to keep in mind that MLB kinda put the players in a tricky spot this past week. We won’t get back into the he-said-he-said of the Rob Manfred-Tony Clark meeting, but the upshot was that many owners seem to have though that the 60-game thing was a “deal,” while many players and agents thought it was merely a proposal to be countered (indeed, Manfred apparently explicitly told Clark that his side could counter). So the players countered with an offer that certainly looked on its face designed to get a pretty easy compromise done at 64-66 games. But MLB flat out refused to consider the players’ counter, and effectively told the players they had to either accept the 60-game proposal this weekend, or a mandated season was coming.

It’s not that the players are using the health and safety protocol discussion as leverage or anything sinister like that, so don’t misread me. Instead, it’s just what I’ve said all along: part of the calculus of how much money you’ll accept to do a thing is at least partially related to how risky you think that thing is. Playing baseball includes some level of risk inherently. But talented people who are able to do it professionally accept that level of risk, in part, because of the level of compensation. Similarly, with COVID-19, of course there’s also a relationship there between the protocols – how intensive are they? how much testing? how safe do I feel? – and what the players are willing to do in terms of a financial deal.

None of this should spur additional optimism or pessimism. The score is still the score, and it remains more likely than not that there’s a mandated short season coming (with all the bad that follows), with COVID-19 a serious threat to derail things at any time. We’ll see whether additional discussions take place today and/or tomorrow that impact both the financial aspects and the health and safety protocols, or we’ll see whether the sides are simply too entrenched to figure anything out short of mandated fighting.

UPDATE: Actually, a vote on the 60-game proposal WILL come today:

The players now have decided to take a vote Sunday, instead of waiting on COVID-19 test results, on whether to accept or decline #MLB’s offer to play 60 games at full prorated pay.

The proposal is widely expected to be voted down, both because of its shortness and because it doesn’t really offer players much in the way of a fair trade for them giving up the right to a grievance and the expanded postseason for two years (the financial benefits of which would primarily go to the owners).

The question then is whether the efforts to step back and evaluate the health and safety protocols will still slow the league’s roll on mandating a shortened season (i.e., still freaking try to get an actual AGREEMENT done), or whether the league will just proceed after the vote to mandate a season. Either way, I’m very nervous about what comes next.

There was no vote taken today by the players with the recent outbreak of COVID-19 potentially changing the dynamics of #MLB's 60-game proposal.

The #MLB proposal remains for 60 games but spring training likely would be pushed back to the June 29-July 4 week, with hopes of starting the season around July 24-27.

The proposed 2021 olive branch may be the last and best chance MLB and MLBPA have to strike a deal. Players had planned on voting today whether to accept a 60-game season or allow Manfred to impose a season of his desired length, sources tell me and @JesseRogersESPN.

If the sides are suddenly talking again today (don’t count on it), you’d love to hear that, even if the owners won’t bend on 60 games, they’ve decided to make other financial concessions (playoff money or forgiven advances or something).

But you’re a fool if you expect anything good.