Thinking About Arguing with an Umpire This Year? Don't Get Too Close or You'll Be Ejected, Possibly Suspended Skip to content 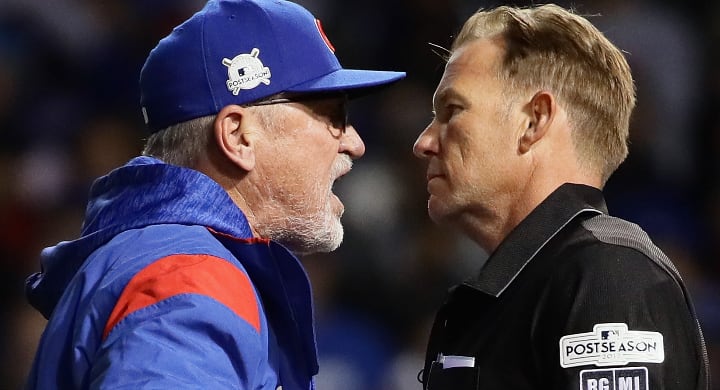 Since the official announcement that baseball will return this season, my brain has been a jumbled mess of things I forgot (Oh, yeah, Kris Bryant is the leadoff hitter, David Ross is the manager, and there’s a three-batter minimum for relievers … ) and new things I’m still learning.

That was made all the more difficult by the fact that there wasn’t actually a new agreement between the players and the league – they simply defaulted to the March Agreement they’ve been trying to alter all along – but there were a ton of rule changes floated along the way, and it’s not easy to immediately recall what made the cut. For example, there will still be a DH in the National League this season, but there will not be expanded playoffs. For another, active rosters will begin with 30 spots, but will eventually drift back to … 26 (oh yeah, they increased roster size before the year or pandemic even started – there’s another one).

Some of these rules will be active for this year only, others for 2020 and 2021 only, and still others will be baked into the next CBA, weaving themselves into the longterm fabric of the game. This is going to be a process of things shaking out.

One rule, however, is almost definitely a one-and-done (or, at least hopefully):

Players or managers who leave their positions to argue with umpires, come within 6 feet of an umpire or opposing player or manager for the purpose of argument, or engage in altercations on the field are subject to immediate ejection and discipline, including fines and suspensions

For the 60 regular season and X-postseason games played in 2020, players and managers cannot come within 6 feet of an umpire, an opposing player, or opposing manager for the purpose of an argument. If they do, they face not only immediate ejection and discipline, but also fines and suspensions. In an artificially shortened season, a suspension of any kind will necessarily represent a large percentage of the season than it would if we were playing 162 games, so … players and managers, beware. One moment of weakness can cost your team.

I’m sure I don’t need to explain the significance of six feet, with respect to the spread of COVID-19, but that distance, along with wearing masks, washing your hands, and avoiding large, indoor crowds are some of the most fundamental ways to mitigate transmission of the disease.

As for the Cubs, we don’t really know what style of manager David Ross will be. We know he’s got the lovable side to him, but he was also brought in for his naturally more serious disciplined demeanor (at least compared to Joe Maddon). Whether that was ever going to translate to a more hard-nosed, in-your-face style manager with respect to the umpires, we’ll have to wait at least a year to find out. Hopefully, for his own safety and the success of the team, he stays in the dugout as much as possible.

And, of course, this doesn’t apply only to managers and coaches. The players will have to be on their best behavior, which means no arguing with the umpires, and also no brawling with the other team. I don’t even want to imagine what would happen if both benches cleared … that could wind up being a disaster.