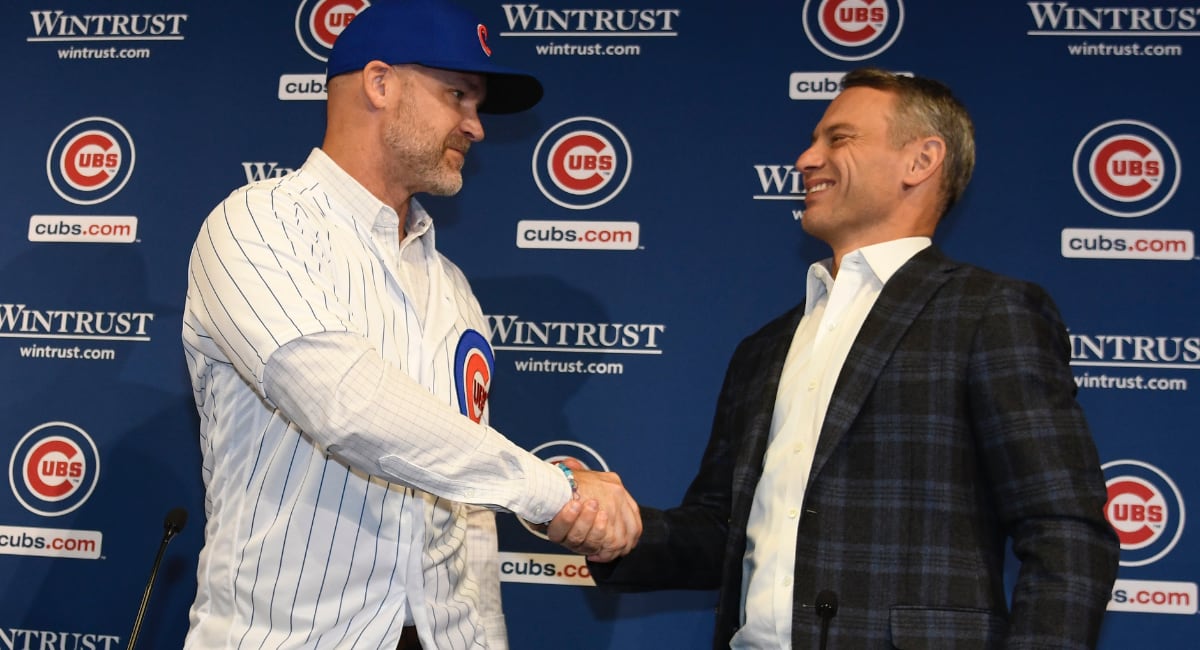 Earlier today, Cubs GM Jed Hoyer and Manager David Ross spoke to the media. It’s been a while since we’ve heard from either of them on the general state of the organization and plans for the 2020 season, so let’s not waste too much time. Here’s what they said.

•   Hoyer believes leaving space on the roster was the right thing to do in service of future big league flexibility (the Cubs used 50 of their 60 allotted spots), as Brett discussed earlier today. I will add that I’ve heard of other organizations planning to do the same thing for the same reason, which sure seems like a no-brainer in retrospect. Along these lines (but with more of a developmental focus, than a competitive), the Cubs will consider adding prospects to the South Bend roster eventually, but not until theres’ a little more comfort with the roster they have assembled. For the time being, MLB depth is the team’s priority.

•   In case you missed it, two Cubs staff members have tested positive for COVID-19, but to date, no Cubs players have. Of course, only a “handful” have been tested so far, with most guys traveling this week, so that’s not quite the good news it appears to be at first glance. With that said, most Cubs players will soon be tested:

•   For now, let’s just hope for the best and see what happens.

•   Along those lines, no Cubs players have yet indicated any desire to opt-out of the season, as a few of their peers around the league have. I’m happy to hear that for personal, fan-related reasons, but I also stand fully ready to support any and all players, coaches, or personnel who decide not to participate this season (as everyone should). Unsurprisingly, the Cubs expect to respect and support any players who do, as well.

•   Circling back to the roster, the Cubs do not have any near-term plans to add to that pool of 50 players from outside the organization, though they will, as always, try to remain nimble when it comes to adding pieces to the puzzle. There are a few interesting free agents remaining on the market, but let’s not forget which offseason we just came out of. If the Cubs weren’t spending before, they’re certainly not going to be aggressive now, even if the luxury tax isn’t necessarily as big of a deal moving forward as it may once have been.

•   Manager David Ross chimed in to discuss his expected emphasis on the MLB safety protocols, which is good to hear. He’s going to be a leader in that clubhouse, and perhaps across the league, and the seriousness with which he enforces these rules will be followed by those in his care.

•   Reliever Brad Wieck, who made his presence known with his performance at the end of his last season, is reportedly “ready to go” this year, following his heart procedure back in February. Hoyer expects to know more later this week on the status of the rest of the team.

•   Hoyer discussed the importance of a fast start, which is both obvious but also literally more true than it’s ever been, especially with the unknowable nature of the August 31st trade deadline: “I think it’s way too early to tell. I just don’t think we know what this is going to be like.”

•   I, Michael, have gone back and forth on the potential movement at the deadline, bouncing between “there’s no way anyone’s going to give up anything of value” and “well, a shut-down closer can still win you the postseason, so maybe that type will retain their value,” but it all comes down to how much each organization actually values – both intrinsically and financially – winning the World Series this year. If it’s the same as ever, well, then, if you need a closer you need a closer, but maybe you’re less likely to go after the “Nick Castellanos” of the world, who are there to help you get to October, not win it. If, by contrast, teams think winning the 2020 World Series matters much less than usual, then those trades won’t be there.

Cubs manager David Ross: "If they're passing out a trophy, I want it."

•   Ross got a little more specific on the way the Cubs can utilize the DH this year, though there weren’t many surprises in his response: “I think we’ve got so much depth in that area, whether it’s Kyle and Souza or Vic and Willson.” Those are the four most obvious choices, with the occasional rest for Anthony Rizzo (and his back), so all-quiet on the northern front. Ross did note the importance of keeping guys rested in a 60-game sprint, and implied that he’s spoken about this decision with Schwarber, in particular:

Ross: Schwarber and the manager are "on the same page" about the DH slot. Schwarber on board, but knows it won't be a strict DH job. Others will be mixed in.

Ross: "I don't see Kyle as a huge outfield risk."

•   With his arm in the outfield and the other potential efficiencies to be had, I certainly hope the Cubs don’t default Schwarber into a strict DH role. It’s not the best use of his talents, the new position, or the roster at large. Period. Naturally, Schwarber told Ross he’s ready to do whatever’s asked of him.

•   Ross also discussed wanting to get eyes on his team as soon as possible, despite plenty of positive feedback since spring training shut down. Specifically, he wants to get some early bullpen sessions and simulated games in soon.

•   There is no plan to move to a six-man rotation as of now and the use of an “opener” has not been discussed – I am happy about both of those decisions, for reasons to long-winded to go into right now. Sticking with the rotation, Ross has not decided on his Opening Day starter, noting that he hasn’t “even seen my players” yet. Which, yeah. Understandable. My guess, if everyone is healthy, is Yu Darvish on Opening Day (remember it was between him and Hendricks at the end of the spring) and Tyler Chatwood to round out the rotation.

•   With that said, Ross is still planning to roll with Kris Bryant and Anthony Rizzo at the top of the order, and is still set on trying to stick with a more set lineup on a day-to-day basis.

•   Hoyer does expect the Cubs to take advantage of their 3 exhibition games this “Summer Camp,” and while the White Sox are the logical opponent for those games, there’s nothing to announce on that front just yet.

•   David Ross, who went from nomadic back-up catcher, to Chicago hero, to Dancing with the Stars performer, to baseball analyst, to first time manager, to missing his first Spring Training game with the flu, to managing his team during a pandemic with brand new rules in each league … thinks it’ll be weird to manage in front of a fan-less crowd at Wrigley Field:

Ross on managing his first game with likely no fans at Wrigley: "It's mind boggling, but that's the times we are in. I can assure every fan they will be missed. The environment around Wrigley with fans in the stands is absolutely electric." #Cubs @WGNNews