Thoughts on the Cubs' Initial Roster: Why Names Are Missing, Transaction Considerations, Prospects, Much More Skip to content 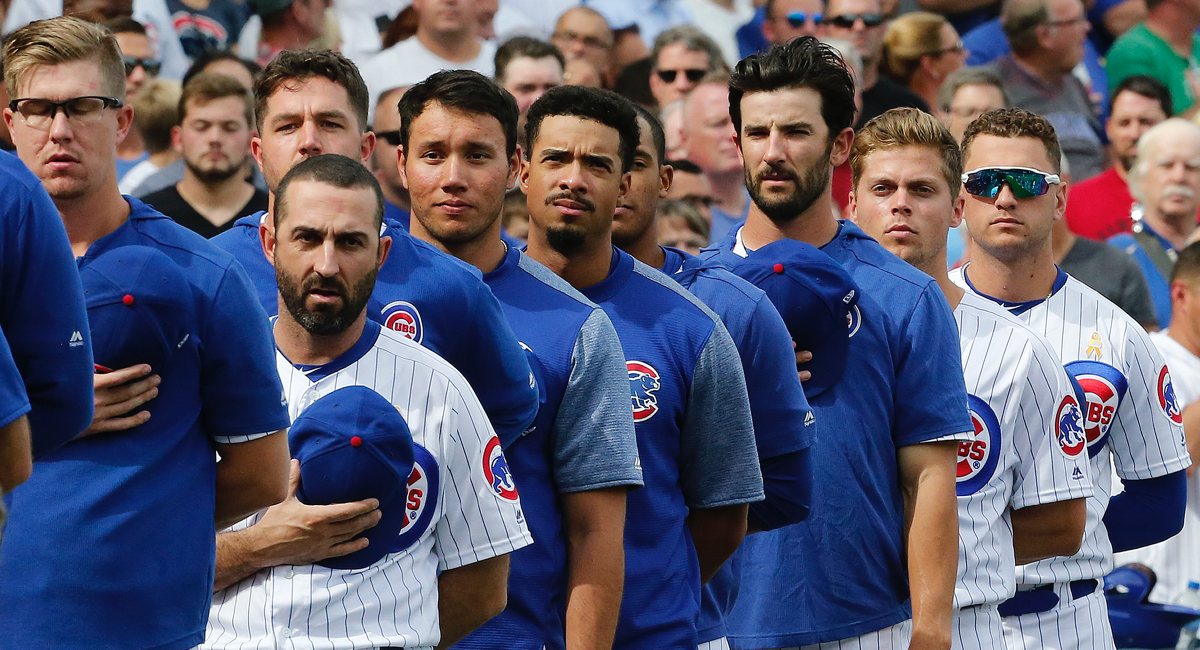 Whenever there’s a big deadline or roster setting or anything like that, you kind of have to go through two big phases of thinking about what transpired: initial reactions and considered explanations.

For the Cubs’ initial Summer Camp roster, that’s all the more true, because we’ve literally never seen this before. The initial reactions are fine, but I tried to hold most of my thoughts back for the “considered explanations” part – because I knew I was gonna need some time to really think this through.

Here’s the initial roster, again, if you missed it:

At a broad level, you immediately see that the Cubs went with only the 39 guys at Wrigley Field whom they believed could win a job on the Opening Day roster. It’ll be 30 players, and by the time the initial Spring Training closed up shop, almost all of the 39 you see up there were still in big league camp. These are the guys who truly have a shot to make the 30-man Opening Day roster. That part really isn’t complicated.

The initial South Bend group pretty clearly looks like a mix of possible in-season call-ups (Adam, Alzolay, Gamez, Mekkes, Rucker, Garcia, Zagunis) and top prospects getting experience (Marquez, Amaya, Morel, Davis). That, too, is mostly uncomplicated, though the biggest question I’ve seen out there – and the one I had initially, too – is why not more prospects? Don’t you want some of your better prospects getting whatever competitive-ish experience they can get this year?

After reflection, I think the answer to that question is yes, and I think the Cubs would say so, too. But some of the roster rules surrounding the 60-man are why we haven’t seen those guys named. Yet.

Getting players onto the 60-man list is easy: you just add them if there’s an open spot. Getting players *off* the list, however, necessarily involves either a special situation you can’t predict or exposing that player to waivers:

Non-40-man-roster players may be removed by trade, release, placement on the COVID-19 related injured list, or placement on the suspended list (by the club), military, voluntarily retired, restricted, disqualified or ineligible lists.

Basically, once you add a guy to the 60-man, you’re not getting him off of there unless he gets seriously hurt, gets COVID-19, goes on a restricted list … or is risked being lost from the organization in some way (trade, release, waivers). Now can you see why the Cubs were extremely judicious about which prospects they put on the initial list?

Well, keep one thing in mind at the outset: to be traded this year, you have to be on the 60-man roster. So, even setting aside all other considerations, it’s easy to see why you might want to keep open at least a few spots for as long as possible just in case something pops up, and then you need to – very briefly – add a player to the 60-man roster to complete a trade.

That said, I think there is a bigger reason why the Cubs’ initial roster has a whopping 10 open spots: they don’t need to fill them all up right now.

Here’s the thing. By the time Spring Training concludes in late July, you might decide you want to keep every player you put on the initial list, which will limit the volume of additional guys you can add (right now the Cubs have 10 open spots). It might also make you much more careful about who you add at that moment in time, having seen what you have – and don’t have – as guys prepared at camp.

But if you decide, instead, that there are some guys who aren’t making the Opening Day roster AND you no longer want to keep in the alternate site group, you will have much more flexibility to add additional prospects later, with the full comfort that you won’t later need those spots for big league fill-ins.

A specific, hypothetical example: a lot of folks (again, me included) wondered why utility infielder Zack Short, who is on the 40-man roster and who could help contribute this year, was left off the initial roster. Is it possible that the Cubs are thinking they are more likely than not to release one of – say – Daniel Descalso or Jason Kipnis, in which case Short is a guy you’d want available in reserve. But just in case the Cubs decide to keep both Descalso and Kipnis, the Cubs don’t want to use up that 60-man spot for Short just yet. Why squeeze yourself in today when you might wind up, organically, with more flexibility in a week or two?

You could do that same kind of thinking with a whole lot of pitchers who were left off (Cory Abbott, Justin Steele, Tyson Miller, etc.). If the Cubs are thinking it’s likely that some of the NRI-type pitchers who don’t make the Opening Day roster will also not ultimately be kept at South Bend, then why risk filling up your 60-man right now, just in case you decide you do later want to keep more of those NRI-type pitchers? You might wind up using up 55 spots to keep the same players around when you could have instead used only 50.

When that dust is all settled – which will include injuries and big league considerations and COVID-19 tests – I do hope there winds up a place for guys like Abbott, Steele, and Miller and other quality upper-level pitching prospects to throw some make-shift innings under the Cubs’ close care. Yes, the alternate site group is primarily about back-filling the big league team, but you might as well use it for player development, too.

To that end, and given this whole discussion, I think you can fairly conclude that their placement on the initial roster is a huuuuuge compliment to Marquez, Amaya, Davis, and Morel. It’s not shocking that those four are very well-regarded (all are in our top 11), but the Cubs have essentially declared that, no matter what else happens, these were the four we absolutely wanted to make sure got this South Bend experience, even if it’s highly unlikely they contribute at the big league level this year.

Furthermore, given that Marquez, Amaya, and Davis are uniformly considered among the Cubs’ top four prospects, together with Nico Hoerner (who will compete for an Opening Day job), how huge is this compliment for Morel? The 21-year-old third baseman has extremely loud tools and hits the ball as hard as anyone in the system, but he also has only limited experience in full-season A ball (like Davis). For him to be included in this group? Big compliment.

If you’re waking up wondering who this Christopher Morel guy is that found his way to the now-50-man player pool, this video is never far from my mind. Potential elite defender with plus arm, instincts, quick-twitch. Wouldn’t be shocked if he’s also getting some SS looks in SB. https://t.co/UgprLXX3PG

Also getting South Bend time, though theoretically capable of big league contributions this year, you’ve got Michael Rucker, who just came back to the Cubs from the Orioles after being a Rule 5 pick. He was flashing some seriously impressive stuff in relief late last year, and after the Orioles tried him back out as a starter, he was a roster squeeze. Very happy to have him back.

And Juan Gámez, who was an unheralded signing out of Mexico this past offseason for the Cubs. A former Twins prospect, Gámez got good results in Mexico – a competitive league – thanks to an elite groundball rate. That said, his profile didn’t strike me as a guy the Cubs felt like they absolutely had to include on this roster, so that tells me they must’ve seen something in Spring Training – and perhaps over quarantine – that really stood out. Now you’re really making me want to see him in action, Cubs.

As for your early thoughts on the Opening Day roster, if you figure the Cubs go 14 position players and 16 pitchers, here are the locks (barring injury or something shocking in camp):

That leaves you three more position player spots to be chosen among Jason Kipnis, Daniel Descalso, Ian Miller, Josh Phegley, P.J. Higgins, and Nico Hoerner. Early guess? Since there will be a catcher on the three-player taxi squad at all times, I doubt the Cubs carry three on the big league roster. Kipnis likely sticks, and Hoerner almost certainly does, too. From there, Cubs might like having Miller’s elite speed available.

On the pitching side, you’ve got six open spots (if the Cubs carry 16 to start things out) for a large group. Brad Wieck is a good bet. Casey Sadler, Ryan Tepera, and Dan Winkler were all looking really good in Spring Training, and the Cubs like that trio a lot. Duane Underwood (out of options) and Trevor Megill (Rule 5) may have legs up based on roster considerations.