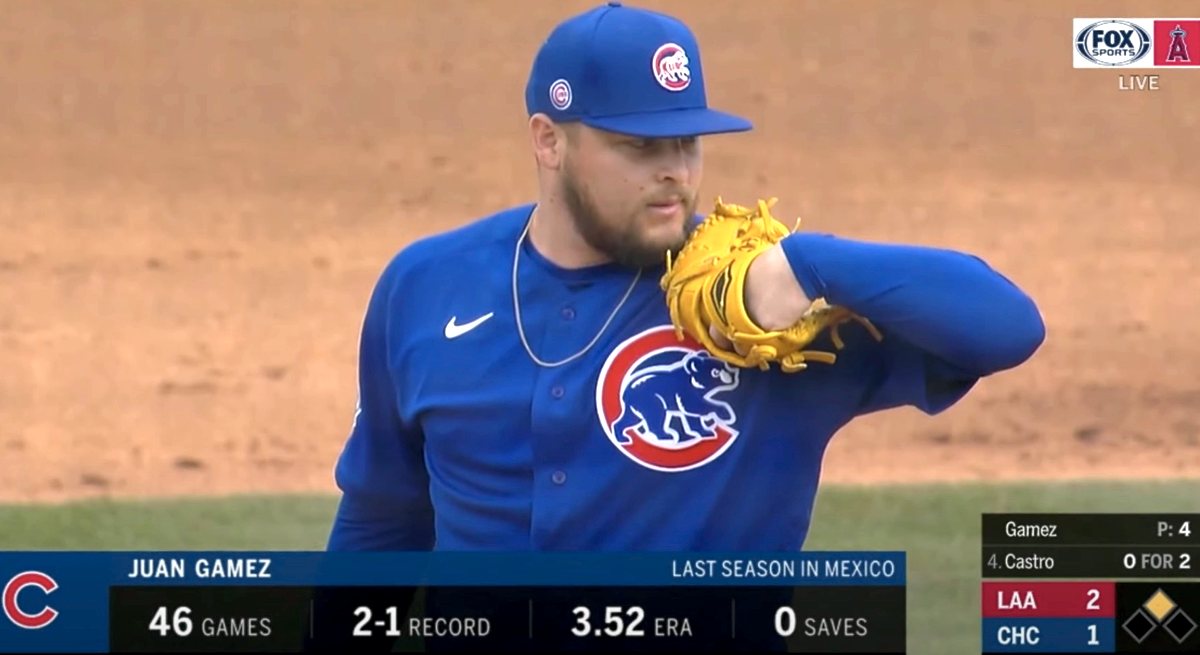 When the Chicago Cubs signed Juan Gámez out of the Mexican League over the offseason, word came as part of a group of signings, and it was almost entirely nondescript.

Here was the best I could muster at the time of the deal:

Juan Gámez, 25, was a Twins prospect for a bit before heading to the Mexican League this past year. He got good results (3.52 ERA over 46.0 relief innings), but it was based entirely on a heroic groundball rate (64.7%). Everything else was meh. So basically, you sign him because he apparently has a killer sinker, and then you try to modify from there.

Gámez showed up to Spring Training, though, and clearly must have impressed, because he was retained by the Cubs on their alternate site roster for Summer Camp. The fact that he was retained at all is a high compliment behind the scenes, and the fact that he is among the few pitchers in the alternate site group – rather that coming to Wrigley Field to compete for a big league job – tells you the Cubs see something to work with. It makes you think there is something particular about him that the Cubs want to try to unlock, and they want more time this year to do it in person before he’s set to be a free agent at the end of the year. I mean, at his age and experience level, he’s effectively one of the few “prospects” the Cubs chose to ensure they had on the 60-man roster, no matter what maneuvering comes thereafter. That’s very telling.

To that end, I was very pleased to read in Sahadev Sharma and Patrick Mooney’s latest at The Athletic that, indeed, there is something the Cubs feel like they see in Gámez. His time in South Bend is almost like an extended tryout:

Gámez, a right-handed reliever, throws what’s repeatedly described as a “bowling-ball sinker.” It’s a pitch that has significant drop — one scout said in the 16- to 22-inch range. Formerly a catcher in the Twins system, Gámez was made a target this past winter by the Cubs scouts and research and development department. They apparently had looks of Gámez throwing 96 to 100 mph in Mexico, which led them to be aggressive and sign him in the offseason. One scout outside the organization who had looks at Gámez said if those reports are accurate and the break and the angle of the sinker remain the same or better, it’s a plus to plus-plus fastball and he’s definitely the type of upside play worth a look. And that’s exactly what this is — as a minor-league free agent whose recent bullpens looked good on video, the Cubs consider this a free look at a talented arm.

If he impresses during his time at the South Bend camp — which is expected to start next week — and the Cubs can hone his slider, which is suspect, but shows at times he can throw for a strike, he suddenly becomes a quality MLB depth option. Otherwise, they can release him, as he was going to be a free agent at the end of the year anyway.

So, Gámez is now fully on the radar for development this year, and possibly even consideration in the big league bullpen. It’s also much easier now to understand, based on that description, why his results looked like they did – he was basically a one-pitch guy, and it’s a pitch that induces a lot of crummy contact. If the slider becomes playable, he has much more of a chance to pitch in MLB. If it doesn’t, it can be pretty hard to succeed, even in middle relief, with just one very good sinker. Possible! But pretty hard.

The Athletic piece has much more on the composition of the Cubs’ initial roster, how it took shape, and what could come next. Good read.

And a look at Gámez in action from Spring Training: