Rob Manfred: "We weren’t going to play more than 60 games no matter how the negotiations with the players went." Skip to content 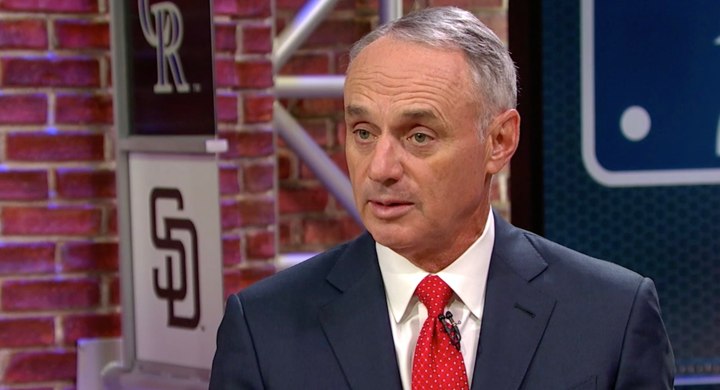 This is one of those things that someone says – a lawyer, no less! – and you know immediately that there’s just no way on earth he meant to say it the way he did. But you cannot unring this bell.

MLB Commissioner Rob Manfred, who was part of the drawn-out, unnecessarily lengthy, “good faith” negotiations with the players to determine the length of the season (an agreement was never reached, and the league imposed a 60-game schedule under the March Agreement), says 60 games was the max:

Given that MLB owners offered season lengths of much longer than 60 games earlier in the negotiations, it would seem Manfred meant to say that, by the time things got the most heated a couple weeks ago, 60 games was the max. You can kinda see that’s what he meant by the context when Dan Patrick asked a follow-up question. Here’s the exchange:

Rob Manfred: “The reality is we weren’t going to play more than 60 games no matter how the negotiations with the players went, or any other factor …. I think this is the one thing we come back to every single day: we’re trying to manage something that has proven to be unpredictable and unmanageable. I know it hasn’t looked particularly pretty in spots, but having said that, if we can pull off this 60-game season, I think it was the best we were going to do for our fans given the course of the virus.

Dan Patrick: “Even if the players accepted everything you offered …. there was no way you were going to go above sixty games?”

Rob Manfred:”It’s the calendar, Dan. We’re playing sixty games in sixty-three days. I don’t see, given the reality of the health situation over the past few weeks, how we were going to get going any faster than the calendar we’re on right now. Look, we did get a sub-optimal result from the negotiations. The fans won’t get an expanded postseason, which I think would have been good with the shortened season. The players left real money on the table. That’s what happens when you have a negotiation that, instead of being collaborative, gets into a conflict situation.”

I suspect Manfred was saying that, when we all thought there would be a negotiated resolution at 64 to 66 games a couple weeks ago, meeting in the middle of the players’ final offer, the owners were never going to budge off of 60 games. Again, we know that they would have done more than 60 games earlier in the year, given that they offered more than 60 games (remember those sliding pay-cut offers?).

All that said, this looks really bad. It sounds like a guy who is ticked that negotiations went poorly, wants people to know he thinks the other side was unreasonable, and wants everyone to believe the calendar was the sole determining factor on the length of the season (and not the two months of dilly-dallying that preceded the final determination).

There’s no question these comments will be raised by the union in its looming grievance, and probably will be bandied about publicly for a while, too.