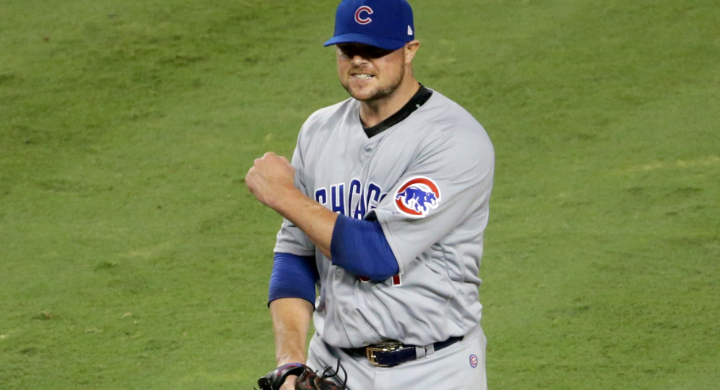 •   Jon Lester is the one Cubs rotation member who didn’t appear in either of the first two intrasquad games, but that’s to be expected. Lester, 36, said up front during the shut down that he wasn’t going to be ramping up and ramping down, and keeping throwing aggressively in the way many younger guys would:

Tommy Hottovy said Jon Lester threw a bullpen today. He's scheduled to throw live BP in two or three days. "He was a guy who really wanted to manage his throws (during the shutdown). He wanted to, as he put it, save as many bullets as he possibly could."

•   Keep in mind, too, that Lester has dealt with dead arm before in the springs, and has a loose body in his elbow that can cause inflammation (remember the “grenade“?). He’s the guy in this group that you want to be extra cautious with, even if it means he’s limited to three or four innings at the start of the season, and the other starters can go deeper at that time. Definitely save those bullets.

•   Getting in work today on the pitching side:

•   Since there’s just one field to work with, you’re a little more limited in your volume for live batting practice. Of course, the flip side is that you want to stagger guys being at the park anyway, so this kind of creates a natural flow in that regard. With a 30-man roster to open the season, all of those guys are legit contenders to make the bullpen out of the gate, though Rea and Cotton may be stretched out as emergency starters/long relievers depending on what happens with the rotation. With Jose Quintana out, possibly for a while, Rea and Cotton are likely the next men up as starters (Adbert Alzolay is in that group, too, but he isn’t currently with the Wrigley Field group and was instead put into the South Bend pool).

•   Pro ball in Japan will be allowing fans at limited capacity come Friday. Another country that handled the pandemic vastly better than the US, and another country whose sports are in a much better place than our country. Sports aren’t the most important thing, mind you, but they’re kind of a measuring stick, as suggested by Sean Doolittle:

"Sports are like the reward of a functioning society."

Read here about how MLB's plan is similar to the Bundesliga's, with a major difference: The U.S.'s response to the pandemic has been a stark contrast to Germany's. https://t.co/cEibpC3Igx

•   As the Cleveland Indians consider a name change, their long-time manager is on board:

•   Cleveland Spiders works. I like it. Meanwhile, the Atlanta Braves did not indicate they will be considering their name at this time. I remain wide open to the discussion if there are groups for whom the name is a problem, though Braves seems a trickier one, since the issue there seems more about the branding (and that gd chop) than about the name, itself.

•   Fancy doorbells and and men’s grooming products (also fancy) are among the Deals of the Day at Amazon today. #ad

Clarinda pitcher Jakob Childs lost his left leg in a lawn mower accident when he was 6. That hasn’t stopped him from being a star football and baseball player and wrestler. And it didn’t stop him from saving his family from a house fire in May. https://t.co/YQtgj9shBR