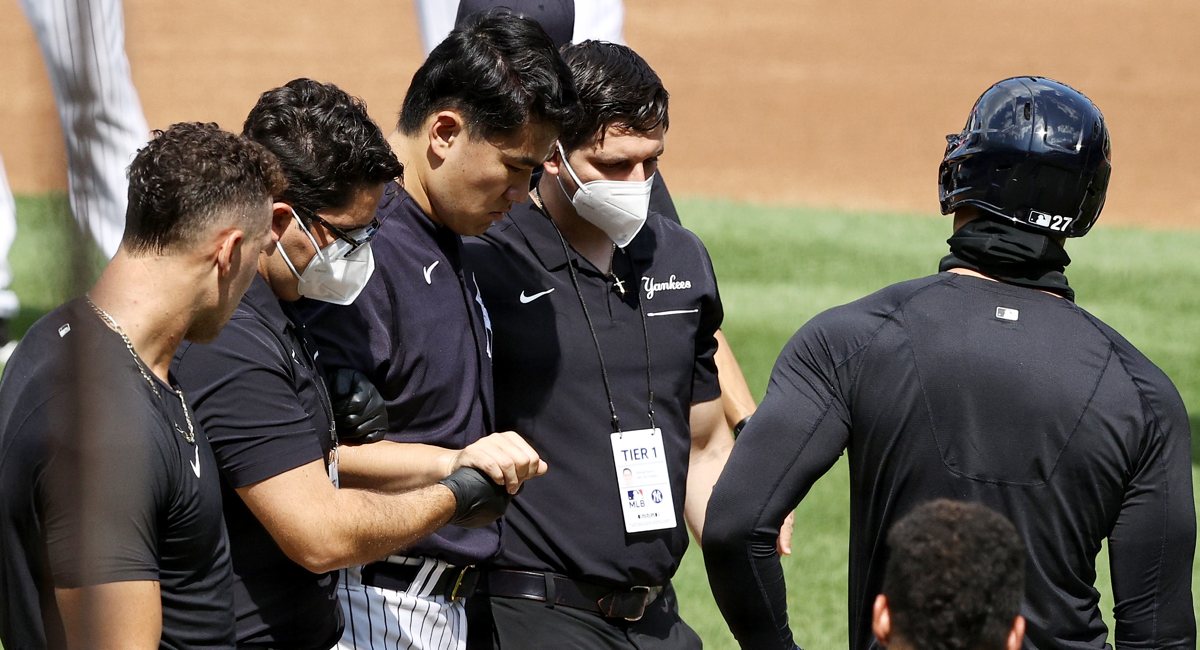 Over the weekend, we were blessed with some beautiful sights and sounds from Wrigley Field, as the Chicago Cubs scrimmaged against themselves and shared plenty of it on social media. Obviously, I was also hoping for a fully televised event (sup Marquee), but at this point? I’ll gladly take what I can get. It’s really changed my mood for the better.

Like when news dropped that MLB would be releasing their schedule tonight, just as we found out that the Cubs are reportedly opening things up against the Brewers. That made it finally feel like summer – somehow, even more than the Fourth of July.

Buuuuut, given the mistakes MLB has already made since reopening camps (more on that in a bit), I think we all better just enjoy every morsel of baseball for as long as we can.

If you missed it over the weekend, Giancarlo Stanton, Masahiro Tanaka, and the Yankees reminded us that the there are other risk on a baseball field, beyond COVID-19.

Fortunately – I tell you purposefully before watching the following clip – Tanaka is okay:

Did you see how long it took for the ball to finally land? That bounced off his *head*. And according to the New York Post, the ball had an exit velocity of 112 MPH off Stanton’s bat. What an awful, scary moment, that could’ve been a LOT worse.

Tanaka was diagnosed with a mild concussion and has been symptom free since going to the hospital on Saturday night. If you can believe it, the Yankees are still hoping/seemingly expecting to have Tanaka ready for the regular season.

Remember All Those “Mistakes” I Was Talking About?

I know this was a holiday weekend, but you just have to be kidding me with the massive testing problems around MLB that are coming out today. I don’t care how many pages were added to the health and safety protocols, how many meetings were held in advance, or how long the negotiations took. This shouldn’t happen to one team, let alone FIVE … let alone in the FIRST FEW DAYS OF CAMP. Completely unacceptable.

1)   The Nationals cancelled practice today because they never received the results of their COVID-19 tests from Friday.

2)   The Athletic’s cancelled practice yesterday because they did not receive their results of their COVID-19 tests.

3)   The Angels Summer Camp has been delayed because the COVID-19 testers *did not show up* forcing players to do saliva tests on their own (which I’m sure they’re totally trained to perform). There were also questions if/how the tests were even shipped to the lab in Utah.

4)   The Astros were still deciding whether or not they should cancel today’s workouts after not receiving the results of their tests since last week. And now they have cancelled. Here’s a statement from their GM.

5)   The Cardinals have delayed practice, presumably under similar circumstances.

I’d call this is an utter embarrassment – because it is – but it’s more a shame, than anything else. If this season has even a tiny chance of working, this cannot be how things are handled.

Here is a statement from Nationals GM Mike Rizzo — and it doesn't mince words: "Without accurate and timely testing it is simply not safe for us to continue with Summer Camp. Major League Baseball needs to work quickly to resolve issues with their process and their lab." pic.twitter.com/Ho8DkAw4Tb

Freddie Freeman Wakes Up the Braves

Over the weekend, we learned that David Price would be opting-out of the 2020 season and that Braves star Freddie Freeman has been dealing with a symptomatic case of COVID-19.

And while I applaud what I think are good intentions behind the following comments, you want players and personnel to have ALREADY felt an urge to follow the protocols to the T:

“I was surprised just like everybody, just because we knew how seriously a lot of us were taking this, especially someone like Freddie,” Braves pitcher Mike Soroka said. “He stayed with his family throughout the entire quarantine. That just goes to show how contagious it can be, and it’s really real.”

“It kind of kicked us into gear to make sure we are following protocols down to the T,” Soroka said.

WATCH: Here's Nick Markakis's full opening comment about his decision to opt out of the 2020 season.
"With everything that's going on not just in baseball but in the world, it makes you open your eyes. I've got 3 kids that I've missed for 11 years now." #11Alive #Braves pic.twitter.com/latxD74Kun

Markakis, 36, had been re-signed by the Braves on a one-year, $4 million deal last offseason. All the best to him and his family.

One Cardinals Flight May Contribute to Cases

Cardinals infielder Elehuris Montero tested positive for COVID-19 after arriving in St. Louis last week. He is, however, asymptomatic and is self-isolating. Montero represents the fourth positive test in the organization, with two others joining him on a flight from the Dominican Republic to the U.S. last week. Several other Cardinals, including Carlos Martinez, were on the flight (status TBD), while others, including Alex Reyes, have not yet appeared on the field at workouts.

I think it’s safe to assume the Cardinals are dealing with at least a handful of positive cases, as well as several potential cases. It’s not clear what impact the travel had, so playing it safe for now is in everyone’s best interest. I wish all of them the very best.

Ryan Braun Won’t Ever Leave, Will He?

Ryan Braun WAS planning to retire at the end of the 2020 season, but thanks to the presence of the designated hitter and shortened season, he may actually be back for one more turn: “I would say at this point, I’m more likely to play another year than I think I would have been. To start with, we’ll only play 60 games instead of 162 games, so obviously at this age and where I’m at in my career, it’s very appealing to me to have the option to DH for a decent percentage of my at-bats,” he said. “And this season will be an experience like we’ve never experienced before.

Therefore, I am officially flipping my position and am anti-universal DH.

•   What is going on with Jed Lowrie? On Sunday, Mets Manager Luis Rojas described Lowrie as “full go,” about two hours before he appeared on the field in a leg brace, for an injury that prevented him from running normally: “It’s frustrating,” Lowrie later said of his status. “Obviously, it hasn’t gone as expected.”

•   Not only is the disconnect between manager and player very odd in this case, but Lowrie also isn’t disclosing any details of his injury, instead saying he’ll “leave [that] up to the Twitterverse” because he doesn’t want any distractions. But … that is distracting. Read more at MLB.com and try to figure it out for yourself. I’m lost. Not criticizing, exactly, but it’s just confusing.

•   Due to the altered schedule, MLB teams will play 67% of their games against their own division this season, compared to 47% in a typical year. And that means that certain matchups will be even more important than usual. With that in mind, Sarah Langs has gone through and collected one hitter v. team matchup per division that will be especially important this season. And if you don’t know the one in the NL Central, I’m guessing you didn’t watch many games in recent years. It’s Eugenio Suarez v. Chicago Cubs.