When I was reading through a brief explanation of changes made to the 2020 PECOTA Standings, I came across this line that made me chuckle: “Please remember that PECOTA and our simulations do not ‘pick’ a team to ‘win’ any particular number of games. Rather, they identify an estimated range of games a team might win and tells you the average of that fairly wide range.”

There’s no annual tradition better than lamenting how many games PECOTA “picked” the Cubs to “win,” so I both feel BP’s pain … and am a contributing source of it. Sorry, PECOTA. Let me make it up to you.

In service of BP’s plea, we’ll start today with a visual representation of the “range” referenced above. At a quick glance, it probably does a better job of illustrating the reality of each division anyway. But before we get to the NL Central, I want to show you the landslide NL West for a good frame of reference of what it looks like when one team is pretty clearly projected to run away with the division (I think it’ll help us when we look at the Cubs): 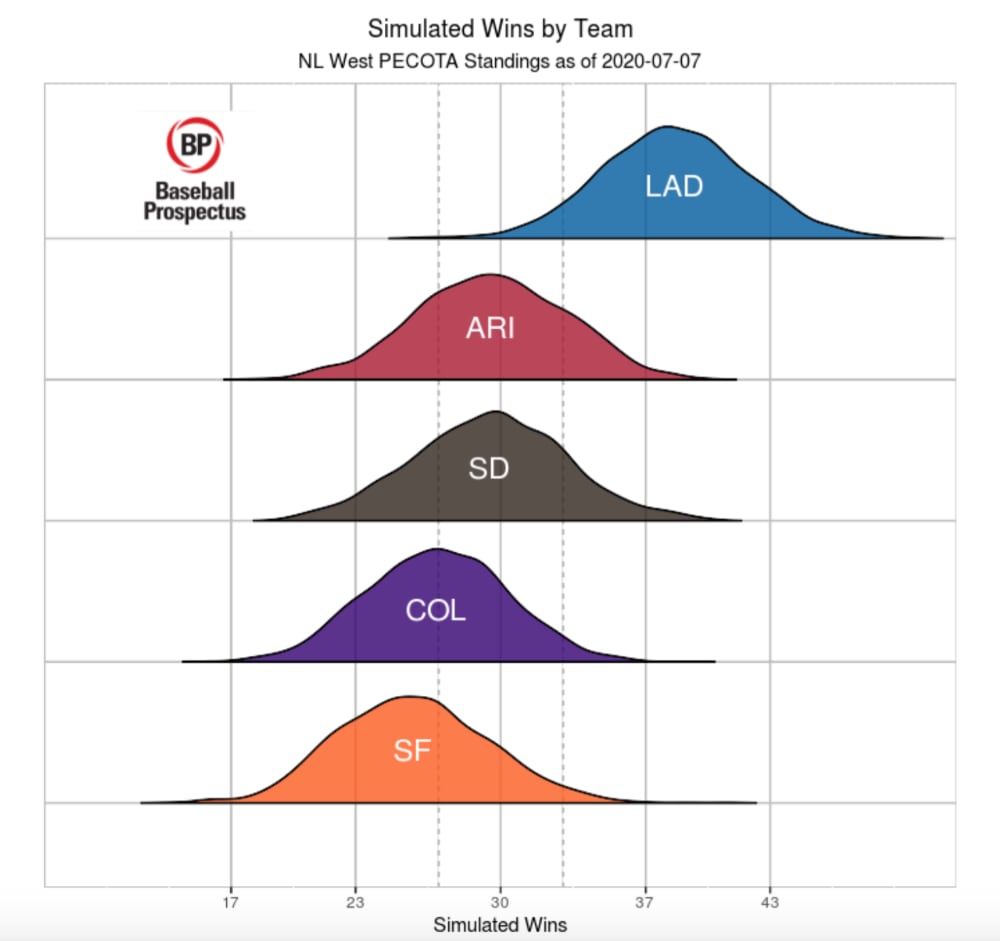 The second-place Diamondbacks would have to basically play up to their highest order deviation just to tie the Dodgers at their most likely win total. In other words, it’ll likely take not one, but TWO statistically unlikely events for the not-Dodgers to win the NL West.

The NL Central, by contrast, is not quite so far apart: 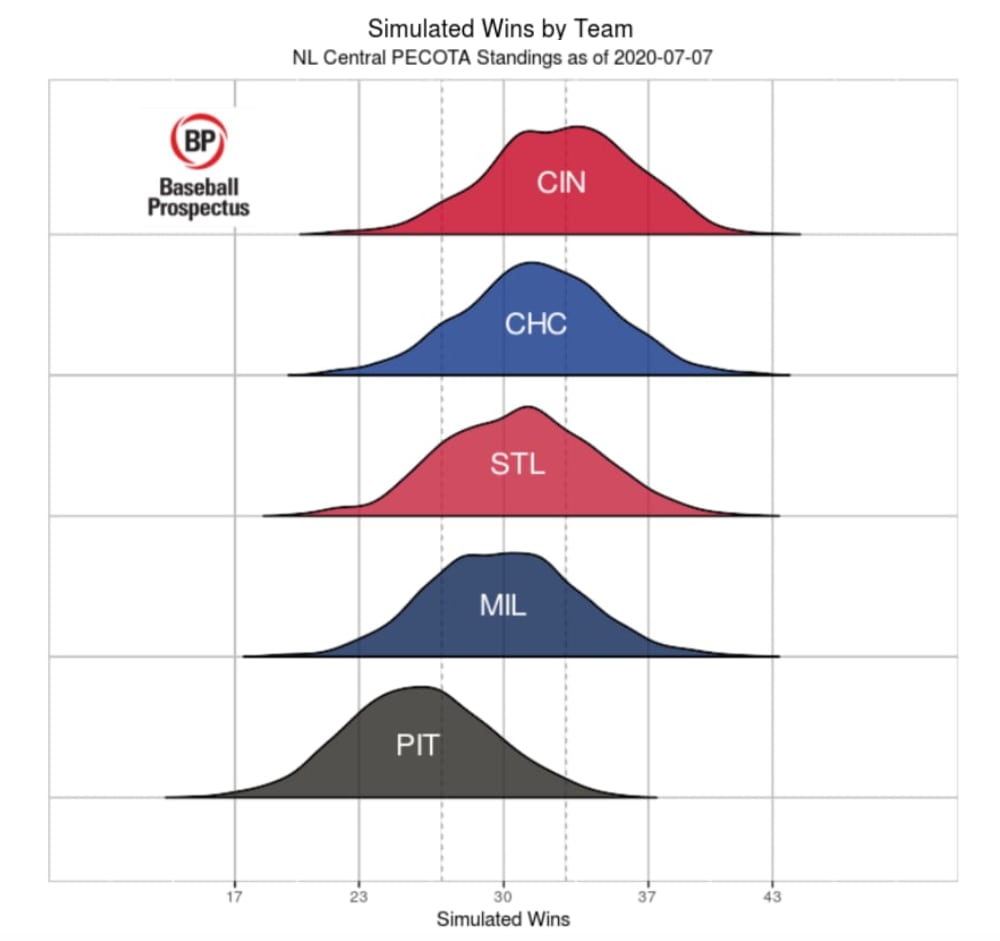 There’s obviously a lot less relative distance between the peaks of the teams in the NL Central, with the exception of the Pirates, but the Reds are the party that comes out on top. And given that they have the easiest schedule in Major League Baseball this season, that’s not particularly surprising. But it would represent the fourth NL Central team to win the division in as many years: Cubs (2017), Brewers (2018), Cardinals (2019), which is pretty strange. And very annoying, given that this was supposed to be the Cubs window (sigh).

But okay. I know you want to see some real numbers, so let’s move onto the table.

According to the updated 60-Game PECOTA Projections, the Chicago Cubs will finish the 2020 season in second place of the NL Central with somewhere between 31-32 wins, just one game behind the Reds, and one game ahead of the Cardinals and Brewers (in the second Wild Card position). That more or less aligns with the ZiPS projections, which actually had the Cubs on top with 32 wins and the Cardinals/Brewers/Reds just behind with 31. And in that respect, the NL Central is a little atypical.

When Andrew Simon (MLB.com) tried to determine how many wins it would take to secure a division this season, the “flip a coin, 50%” tier was 35 wins. You couldn’t “feel confident, 70%” without at least 36 wins. But in the NL Central, given (1) how even the talent is among the four top teams and (2) the lack of contests against the top dogs in the NL East and West (plus the fact that the AL Central isn’t exactly the toughest division in baseball), 35 wins feels like a lock for the NL Central division crown. Get there and you’re probably playing in October.

With that said, it’s not difficult to be disappointed by everything else.

After running 1,000 simulations of the 60-game season, the Cubs odds of winning the division are basically just 1 in 4 (25%), compared to the Reds who are closer to 2 in 5 (44%). That’s a relatively large gap, which should not be lost on any of us. The Cubs, themselves, have 6 percentage points on the Cardinals and have odds twice as high as the Brewers for the division, but that’s little solace after missing the playoffs last year and an early exit in 2018.

Let’s just say beating Cincinnati as early and as often as possible this season will be extremely important. That may be the ticket to winning the division. The Cubs have a four-game series against the Reds before the end of July and will face them seven times before the end of August. Win five of those seven games and you’re likely feeling great about the Cubs chances come October. Lose five and, well ….

Beyond the odds, I will point out that the Cubs (319 runs) are projected to have the top offense in the NL Central this season, behind only the Dodgers (338 runs) in the National League and the Astros (341) and Twins (335) in the American League. That’s pretty darn cool. Perhaps, then, the Cubs are just two over-performances away from a big year (Alec Mills and Tyler Chatwood? Please?).

I LOVE talking about real baseball stuff again. Well, I mean, not real, because it’s projections. But, well, you know. Baseball.