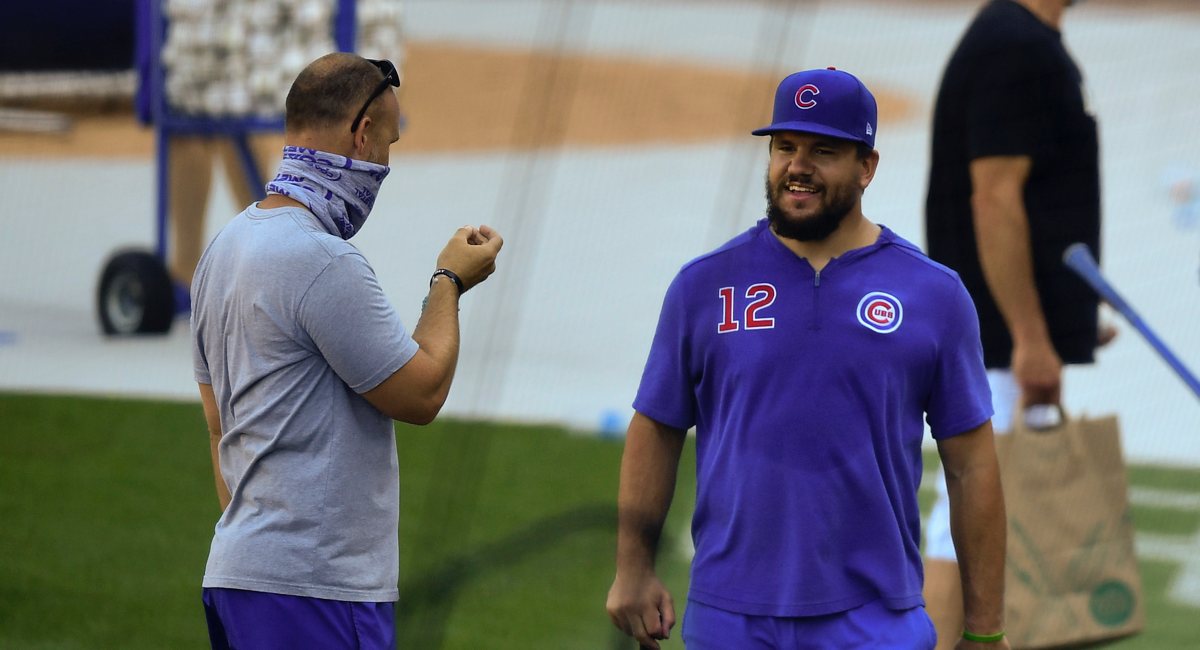 It took only five months, but finally we got a clear visual message from the top: wear a mask. There is nothing political about it. That’s just the plain old, scientifically-driven, medical advice from experts. Even here on this sports site, we recognize the importance: if you want sports to succeed in the face of this pandemic, then every dang person just needs to mask up when they go around other people. It’s that simple. Got some surgical ones that aren’t needed for hospitals? Great. Use ’em. Want to get team logo ones? Great, get ’em here. Want to fashion your own out of shirts or bandanas? It can be done, per the CDC! Just please do it. No one wants more sickness, more deaths, and more lockdowns.

The Cubs wear masks when they’re around each other and/or in enclosed spaces, too …

•   When managing intrasquad games, David Ross can’t help but get jacked up when, for example, Kyle Schwarber absolutely obliterates a ball. He was hooting and hollering loudly on Friday. But then he feels bad because the ball was obliterated off of his own pitcher, Tyler Chatwood. “That’s the challenge, right?” Ross said, per Cubs.com. “I just like to voice my opinion, like, ‘Good swing,’ or ‘Good pitch,’ or ‘Way to swing it.’ And one of the pitchers said, ‘It’s really weird to have your manager rooting against you.’ I tried to tell him I’m on everybody’s side.” I guess what you really want is the pitcher to execute his pitch perfectly, the hitter to still somehow put a great swing on it, and then the defender to make an unbelievable play. Everybody wins.

•   Folks. Even Jon Lester, who joked that the Cubs were about to lose a force from their lineup every five days, is in favor of the DH: “It takes a little bit of the nuance of the game away. But, I think right now, going forward, if we keep this DH in the National League, you’re creating 15 more jobs for guys, which is a good thing for our game and for those guys. So I think it’s a nice thing.” (Cubs.com) If Jon Lester is on board with the DH for good, then we can all be, right?

•   The Cubs are gonna have so many MVP candidates:

•   Cubs could have another arm coming to South Bend:

If we’re letting Instagram stories break the news, then it would appear Keegan Thompson is another starting pitching prospect poised to join the South Bend taxi squad.

Thompson battled injuries last year, but impressed with a 9.2 K/9 and 4.3 K/BB in the Arizona Fall League.

•   This is the single biggest issue that MLB’s testing plan, even if perfectly executed, cannot account for:

Cam Gallagher had COVID-19 when he played in last night’s intrasquad game. No one knew it, of course. He didn’t have symptoms. But the next day, his most recent test came back positive.

•   The Brewers have placed starter Eric Lauer on the IL, though it’s unclear what the issue is. Meanwhile, Luis Urias and Angel Perdomo are now on the IL with known COVID-19 cases.

Jake Arrieta, man. You can just see how much he had working during that stretch. 95mph four-seamer. 92 mph cutter/slider. 90 mph traditional slider. 83 mph power curve. And all coming at you from a crossfire delivery. Hitters had no chance:

#OTD in 2015, Jake Arrieta throws a complete game 2-hitter against the White Sox, striking out 9.

•   Inspired by his adventures in the bleachers: