Although Anthony Rizzo is technically sidelined at the moment (those annual back issues have arrived on schedule), we did get some good news on Sunday, when we learned that he took live batting practice for the first time in about a week. We’ll have to wait to see how he/his back feels waking up today, but experience tells us this will be temporary and probably won’t limit his production in 2020.

And I should hope not, because he happens to be the primary man at *the* top first base spot in Major League Baseball, using FanGraphs Depth Charts projected WAR for 2020. 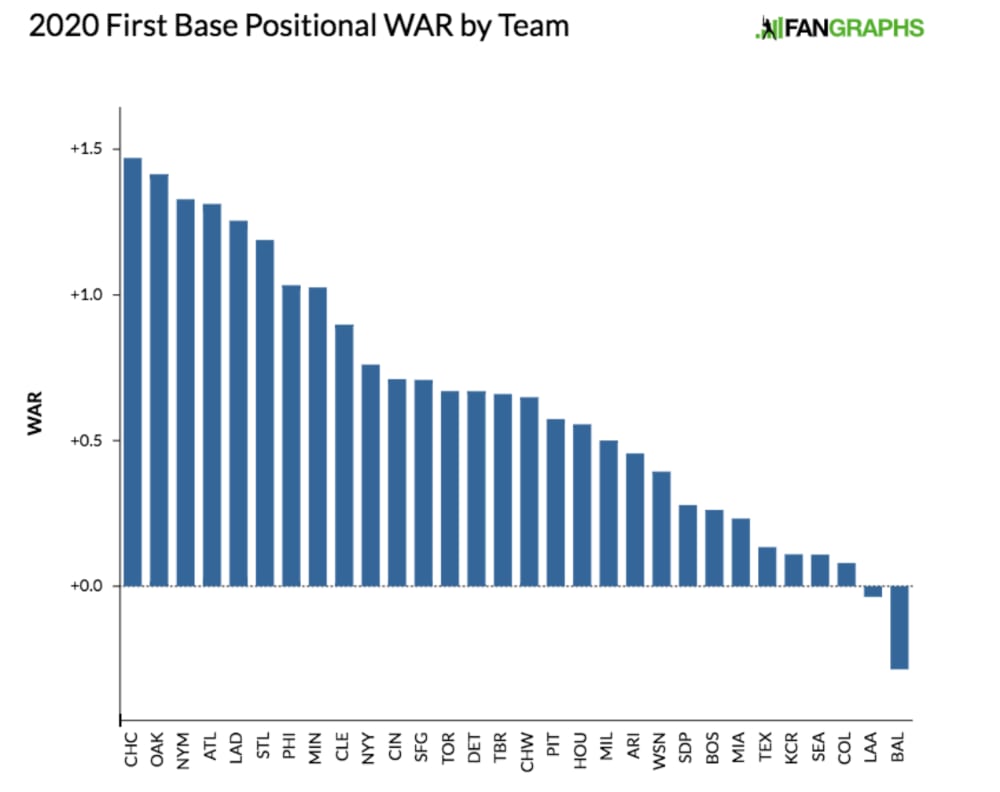 The first base landscape in 2020 is not the strength it was even a couple years ago – Joey Votto, Miguel Cabrera, and Paul Goldschmidt are getting older, and Cody Bellinger has played a lot of outfield, among some other general changes – but that’s not to take away from the fact that Rizzo continues to be a model of consistency in MLB.

Indeed, that’s kind of his thing:

And while he won’t likely have time to reach his usual 27-32 homers or other counting stat milestones this season, the rates are all projected to look mighty fine when the regular season comes to a close in late September: .283/.388/.514 (1.5 WAR).

That slash line would actually be a step down from his huge bounce back season in 2019, but generally tracks with his 2017 numbers (and career, in general), which is encouraging given the conservative nature of projections. I will note that even the most conservative projections will likely look silly this year, because anyone can dominate or struggle in just 60 games, but knowing the baseline is a good place to start.

And hey, there are some reasons to be excited about his 2019 renaissance. Although Rizzo, 30, has always been pretty consistent, he had his best three offensive seasons from 2014-2016, before taking a step backwards in 2017 and 2018. In 2019, however, he was damn near close to his peak form and for a very specific reason: going the other way.

You may have forgotten this narrative from last season, but if you think back you’ll remember that the Cubs started going up the middle and to the opposite field far more often than usual. And for a lot of players (especially Jason Heyward, Javy Baez, Kyle Schwarber, and Anthony Rizzo) it was making all the difference in the world.

Oppo+ is a stat that measures how often a player is using the opposite field compared to the league average (100). Rizzo was just about league average last season after using the opposite field about 19% less than the average player the year prior! When you’re a slower, power-hitting lefty who doesn’t use the opposite field, it’s very easy to beat you with an aggressive shift. But when you start spreading things out, not only are you going to drop more hits in, eventually the other team will have to shift you less aggressively, allowing more of your batted balls to the pull side to land for hits.

But that’s not all, Anthony Rizzo also enjoyed his best hard hit rate *and* line drive rate in 2019, which actually help support his slightly elevated BABIP. And he was able to accomplish all of this with just modest increases to his strikeout rate, which still sat at a beautiful 14.0%, and a solid walk rate (11.6%).

So I guess what I’m saying is, Anthony Rizzo has always been offensively consistent and that plays out in his No. 1 projected finish among first baseman for 2020. But if (1) he’s healthy and (2) the changes he made to his approach in 2019 carry through to this season, we could be in store for another ~140 wRC+ offensive output, which is right in line with some of his best seasons overall.

Oh, and that’s before we even account for the whole Best Shape of His Life stuff ….