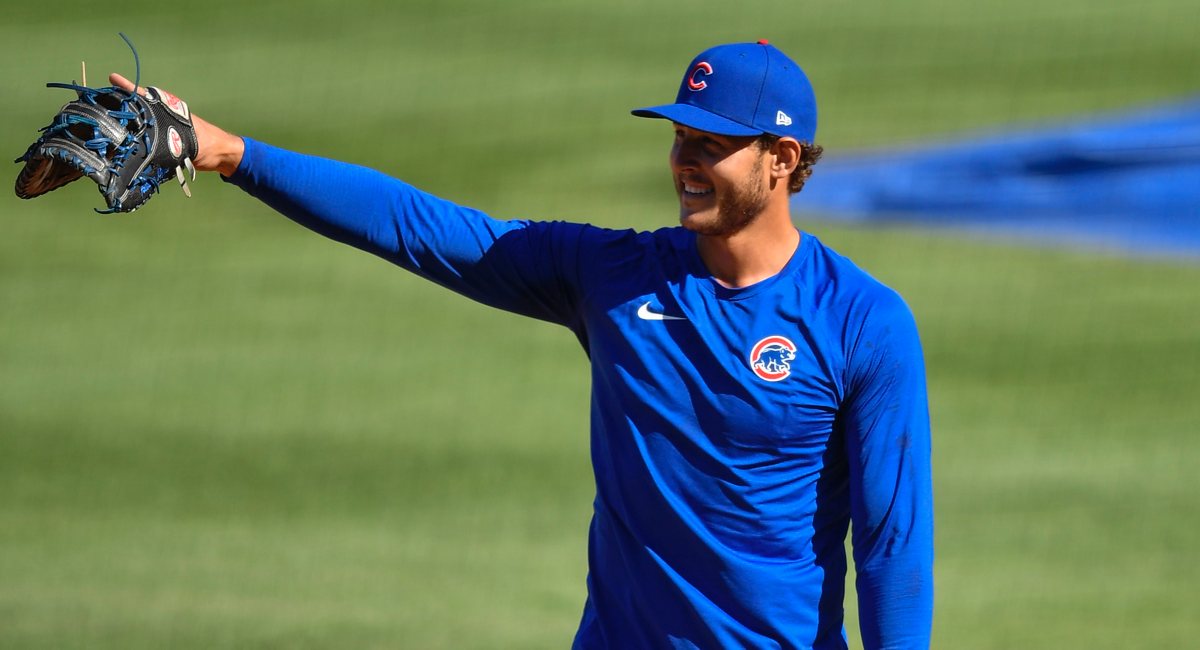 We roasted some hot dogs on the fire in our backyard last night – yes, we’re still making a fire every day – and that was pretty great.

•   Anthony Rizzo is going for an MRI on his lower back (ESPN), which is both unnerving and also understandable at this point. Having had several days off for his back stiffness to recede, and then having taken live BP on Sunday only for the back issues to resurface, it makes sense to investigate further. Obviously what you hope you learn is that it’s nothing new, and for whatever reason, the back just didn’t quite respond after that first set of BP back. Yeah, there’d be some uncertainty there, but at least you’d rule out anything serious.

•   The strikeout pitch was apparently 94 mph and up in the zone:

Really nice sequence from Jharel Cotton to strike out Javy on 3 pitches. I believe it was a change then a cutter then a high fastball. Came right at him.

•   Cotton ultimately went 2.1 innings, so he’s still in that near-stretched-out zone where he could become a starter for the Cubs if an absence arose over the next 10 days, or he could go into middle relief and be a multi-inning guy. Cotton does have minor league options left, which was no doubt part of the reason the Cubs traded for him last fall – bring him in to see if you can get him over that starter hump, but if not, you could at least maybe have a useful up-and-down reliever. Really sucks that there’s no minor league season for him.

•   Cotton has long been viewed as a capable big league pitcher with a good fastball and a plus-plus changeup, but like so many other talented arms, the questions have been the third pitch and the command. He *has* upwards of five pitches (four-seamer, two-seamer, cutter, curveball, changeup), but again, the question is whether anything else besides the four-seamer and the changeup will play at a big league level. You throw in two mostly lost years to Tommy John surgery and a serious hamstring injury and, well, I’ll say it again: it really sucks that there’s no minor league season for him.

•   When he wasn’t missing his spot and giving up a cookie to Javy Báez, Kyle Ryan looked like his usual self last night. Pretty good first outing for a guy whose arrival was delayed.

•   In writing up the game last night, I wanted to focus on Craig Kimbrel for obvious reasons – he actually looked good! – but I don’t want to totally sleep on the one hit he gave up to Nico Hoerner. There’s no replay right now, so I’m going just on what I saw live, but it looked like Kimbrel did a good job of getting his four-seamer elevated, right at the top of the zone or slightly above, yet Hoerner still got his arms out and smacked the pitch to the right side with enough authority that it was through the hole before there was even much movement at first base and second base.

•   It was one swing, one play. So whatever. But it made me think a lot about what is so enticing about Hoerner, but also some of the risk: not too many guys could’ve gotten on top of a pitch like that to square it up, but Hoerner let it get deep in the zone and he’s able to do it. On the flip side, all else equal, that’s probably a pitch you don’t want to be swinging at because a slapped single to right is your best-case-scenario outcome. You usually aren’t going to drive it in the air with authority, and more often than not it’s going to be a swing-and-miss or a pop-up (it’s what Kimbrel does). We’ve seen this kind of conversation before with guys who are just naturally gifted at making good contact throughout their younger playing days – Starlin Castro, Albert Almora, countless prospects who topped out at AAA – and you just don’t want to see Hoerner fall into that same trap. The one where your own ability to make contact is used against you. Yet at the same time, you also don’t want to take that skill away from Hoerner, because if he squares the ball up more often than most *even while* making contact at a high clip, well, then, maybe he’ll just be a .310/.340/.440 guy, instead of you trying to make him something else, and you wind up with .270/.310/.415. Maxing out walk rate and ISO aren’t always worth it if that process takes away too much of what a guy can do well. Some high-contact guys are just special like that.

•   David Ross, like Anthony Rizzo, wanted to get the view from another vantage point … so he went all the way over to the rooftops:

David Ross watched practice from a rooftop yesterday. (Forgive the quality of the picture.)

“It was nice. I got a nice seat over there. I got to watch the practice. The energy was good. I could hear the guys.” pic.twitter.com/WnBKAzd7gG

•   Fanatics is running a series of timed deals today, and the earlier deals are the better ones. So check it out.