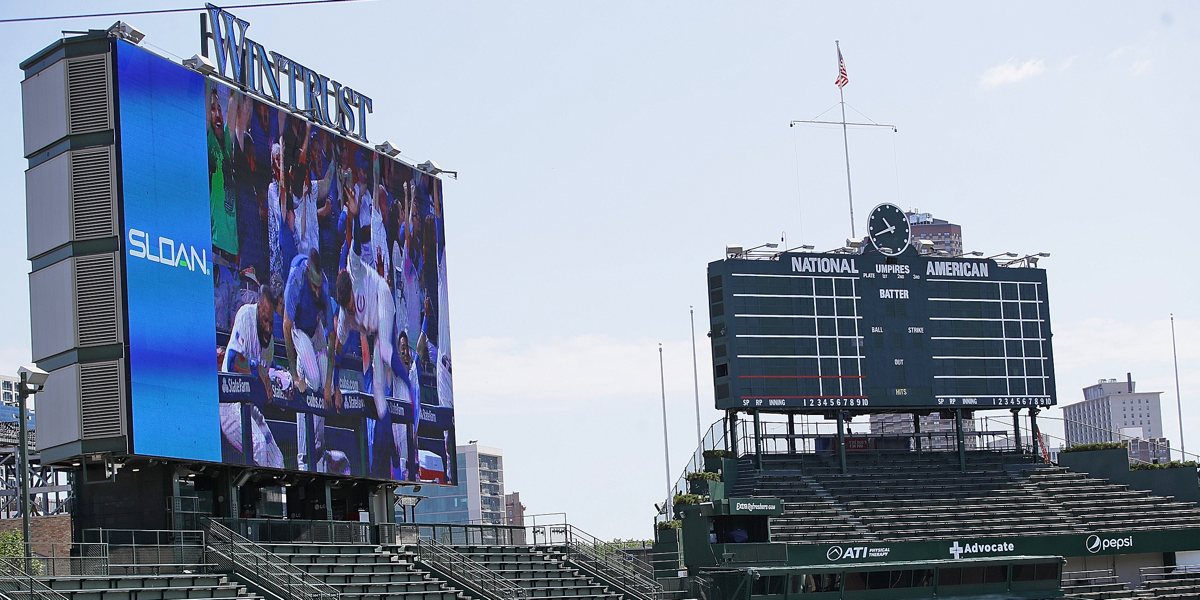 The world lost a truly good man, and a legend in the fight for civil rights in this country. Congressman John Lewis passed away at the age of 80. His contributions, lessons, and fundamental goodness should never be forgotten.

Although he was speaking of a specific event at the time back in December, Rep. Lewis’s words stick with me in all contexts at this moment in our country’s history:

“When you see something that is not right, not just, not fair, you have a moral obligation to say something, to do something. Our children and their children will ask us ‘what did you do? what did you say?’ We have a mission and a mandate to be on the right side of history.”

•   The Cubs made official the cancellation of the 2021 Cubs Convention last night with this statement:

“As we continue to navigate the many challenges and changes which have resulted from the COVID-19 pandemic, below is an important update regarding the 2021 Cubs Convention.

We’ve made the decision to cancel the 2021 Cubs Convention originally scheduled to take place January 15-17 at the Sheraton Grand Chicago. With current public health guidelines limiting mass gatherings and unknown restrictions on hotels and events in the future, it’s become clear that planning and hosting an event of this magnitude is not practical at this time.

Like you, we look forward to this special event each year as a way for our entire organization to spend time with you, our beloved fans, and celebrate the new season ahead. While we are all disappointed we won’t be able to host our in-person event, we are exploring new and exciting ways to engage virtually. We will share additional details with you as soon as they are finalized in the coming months.”

•   I hope that a virtual convention could be made available to even more fans, and, in that way, be a positive one-time experience. But after that, for me, the Convention has always been about being there together with so many other crazy Cubs fans, and I hope 2022 goes off without a hitch. I will miss it in January deeply.

•   Consider Ian Happ on board with the piped-in fake crowd noise:

"I need it as a player, for sure,” Cubs outfielder Ian Happ told 670 The Score on Wednesday. https://t.co/QEQMdNKFWp

•   The noise, which is reportedly coming from ‘MLB The Show’, is probably better than the alternative, in hindsight. But they still need to work out the timing and level(s) of excitement for various types of plays if they don’t want it to be a season-long punchline, and I also hope we do still get an increase in real, on-field sounds and chatter.

•   The White Sox have started informing front office and scouting personnel that they will not be retained after October:

.@jrfegan has a story on the White Sox eliminating jobs in the baseball operations department, as first reported by @Ken_Rosenthal. https://t.co/Sc6AkOm3tF

•   It sucks, and it isn’t going to be limited to the White Sox. Many baseball contracts run through October, and as clubs look to recoup losses from this year (and guard against the uncertainty of next year, they’ll be cutting costs significantly heading into 2021. A whole lot of regular folks who happen to work for baseball organizations are going to lose their jobs.

Do you feel underrated across the MLB landscape?

Kyle Hendricks: "I don't pay attention to it … I couldn't care less."

•   Jason Kipnis – you may have heard he’s from the Chicago area – officially made the Cubs yesterday, and he is pumped. I don’t want to entirely discount the idea that a guy might perform a little better at the margins when he’s really stoked to be where he is:

“I just find myself enjoying this more than probably a normal guy might.”

The Cubs officially added Jason Kipnis to the 40-man roster, and being at Wrigley Field is bringing back childhood memories for the Northbrook native.https://t.co/dCPZOrfjwc

•   What a great side-by-side from Bryan:

•   Certain things will be obvious to all of us, from the leg kick to the quieted hands and so forth. But what really sticks under the hood is how, despite the dramatically changed load, the dramatically reduced bat waggle, and the much gentler weight transfer, Báez is still showing off just how rotational he is in his swing. It’s basically the same amount of rotation in his core and his hips, but he’s clearly using it much more efficiently. That’s how, even with this new “gentle” swing, he can still generate absurd bat speed and power, all while greatly reducing his margin for error.

Take the time to hear directly from some players. How much they internalize these experiences with race. In the end, being in a team environment around fans who love their team, they don’t want to feel alone anymore. Thanks Marly. ⬇️ #Cubs #Phillies #MLB #Braves https://t.co/Eev8ECflvf

Unless something nuts happens between now and next Friday, at this time next week, we’ll be talking about the result of a Cubs game. Win or lose, I need that in my life right now.