Baseball is Back, Cubs-Sox, Cubs Prospects, Bullpen Turnover, and Other Cubs Bullets Skip to content 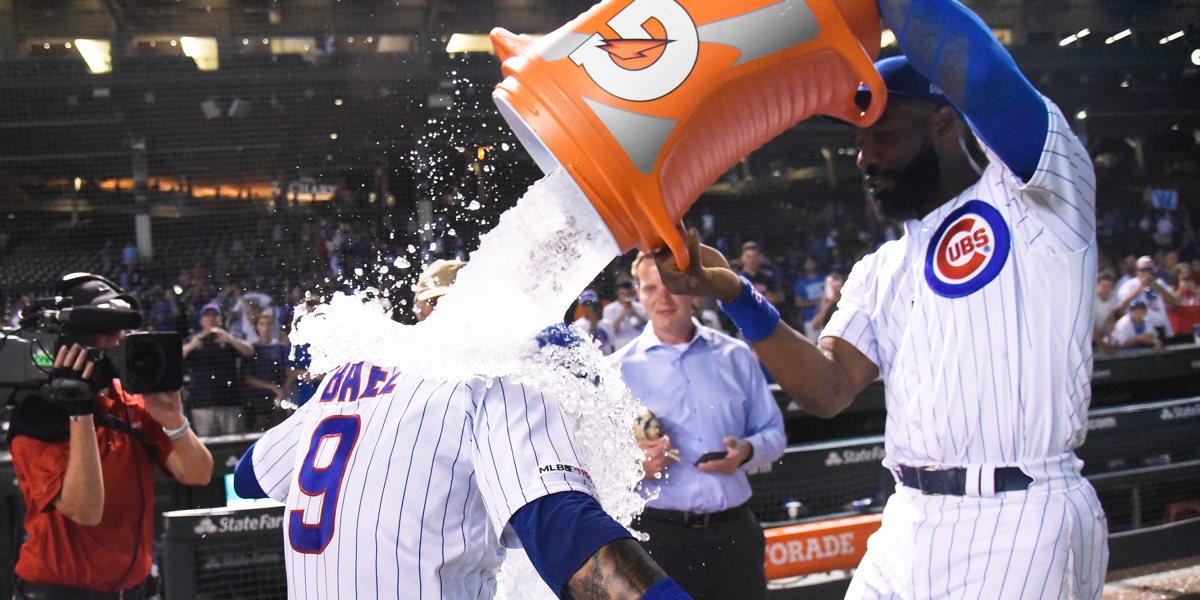 The last time we saw the Chicago Cubs play a baseball game, it was 130 days ago on March 11. Yu Darvish had started a Cactus League game against the Padres, and Ryan Tepera secured the 3-2 win in the 9th.

This was the final image of Cubs baseball before things shut down. pic.twitter.com/b6DY2qu2CQ

•   No idea if Cubs-Sox will do this kind of thing in Chicago tonight, but good Lord this is a huge appetite in New York for fake baseball:

Yankees-Mets earned a 4.4 rating and an 11 share last night in NY on YES and SNY combined.

For context, the four broadcast networks combined for a 3.9/10 in NY in primetime.

•   It’s cool that the return of (fake) baseball for the Cubs is against the Sox, who the Cubs will also see six times in the regular season. And man, the White Sox sure do have some exciting young players. Luis Robert is pretty ridiculous – he hit two MAMMOTH home runs yesterday in the White Sox’s intrasquad game:

Luis Robert hit another home run AND it hit the last row.

Say it with us: MERCY! pic.twitter.com/vFNcH2U2R9

•   Wonder what the future of Gatorade baths will look like in the 2020 season. I think you can still do it, right?

•   Cubs hitting coach Anthony Iapoce on Willson Contreras: “He was one of the guys that sent me video [during the three-month break], and you didn’t even really need to critique or do anything to it. You just say, ‘Keep doing what you’re doing.'” (Cubs.com)

•   Swim gear, chargers, headphones, books, and more are your Deals of the Day at Amazon. #ad

The prospects that will he first-time eligible for the Rule 5 Draft this winter if not added to the 40-man: Cory Abbott, Keegan Thompson, Brailyn Marquez, Erich Uelmen, Chris Morel, Brendon Little, Aramis Ademan.

•   Marquez is so obvious we needn’t discuss. Most believe Thompson is a future big leaguer, but having missed most of last year with an injury, and then having no minor league season this year, it’s much harder to say whether he’s at a real RISK of being selected. It might depend on whether there is a fall league of some kind and how he looks then. Abbott was the Cubs’ pitcher of the year for a reason, though having not pitched above AA, there’s probably at least some chance he wouldn’t be selected either (then again, might some team see his slider and think he could be a quick bullpen convert for a year so they get to keep him?). I tend to think he’s added. As for Morel, he hasn’t even played at High-A yet, so any team taking him would have to do so as an extreeeeeeeeme stash, which is hard to do with position players. Even with guys like Delino Deshields, Jr. and Odubel Herrera, they’d just played at AA before getting selected. Morel is going to have played at Low-A, and then had a non-season. I don’t think he’s a realistic threat to be selected, which is not a comment on his status as a prospect. He just needs a lot more development time.

•   Also, a broad Rule 5 thought for this offseason: in a world where teams cut spending dramatically, it stands to reason that you might see quite a bit more aggressiveness in the Rule 5 Draft (and also more aggressive prospect protection before it). I could see teams getting especially aggressive in taking fringe starter types that they want to immediately convert into their big league bullpen (or at least get a nearly free shot to see how it might go).

•   If you missed it yesterday, David Ross said that Nico Hoerner and Jason Kipnis (no mention of David Bote) were his two main options at second base. Interesting.

•   A reminder on the potential scariness of COVID-19:

Freddie Freeman says he prayed for his life after COVID-19 fever hit 104.5 degrees.

•   I’ve had a 104+ fever only once in my life, and when I was at urgent care, I couldn’t remember my address. That terrified me. Please continue to social distance, wear a mask when you’re out and about, and support the efforts of others who are trying to limit the spread of this virus.

•   Speaking of which, the Cubs have done what they can to make Wrigley Field as easy as possible for players and personnel to stay safely apart:

in addition to auxiliary dugouts past the photo wells, there are designated spots on the benches of the third and first base dugouts to encourage social distancing: pic.twitter.com/H9S5Her7jH

Longest tenured Cub currently in the BP is Kyle Ryan who was called up 4/06/19. pic.twitter.com/W0RGpEYheG