Finalizing the Cubs Rotation, Maples and Marmol, Weather, Dad'ing, and Other Cubs Bullets Skip to content 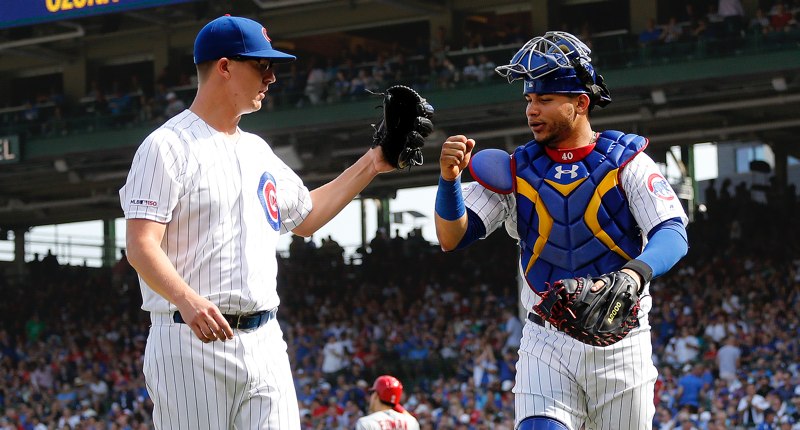 Could not sleep last night. Don’t know if it was the complex feelings about Opening Day arriving today or some body chemistry issue, but I did the cat nap thing all night long. All I know is my head is kinda cranking me now, and I’m quite tired.

•   David Ross confirmed what we already knew to be true: the Cubs’ rotation will go Kyle Hendricks, Yu Darvish, Tyler Chatwood, Jon Lester, and Alec Mills to open the season. I really hope Mills takes this opportunity and runs with it. His development the the last few years has been really impressive. Methodical, consistent, diversifying his pitches, adding a little velocity, manipulating his arm to add some craftiness. He could be a guy for the Cubs beyond this year, and I hope this is his opportunity to showcase it.

•   The Brewers have announced that Freddy Peralta will start their third game of the season, so the Cubs will get Brandon Woodruff, Corbin Burnes, and Peralta – all hard-throwing righties with nasty stuff. Just FYI. Good thing Anthony Rizzo returned last night and seems good to go for this weekend’s opening series.

•   Speaking of important Cubs with back issues, David Ross told Cubs.com that Bryant missing last night’s game was definitely a matter of caution: “We’re just trying to be cautious. If today’s a regular-season game, Kris plays.”

•   It just makes me sad how obscene his slider is, because what’s not shown in-between is the 97 mph fastball that could literally go anywhere once it leaves his hand:

•   Maples’ slider is so good that he could throw it and nothing else and probably pitch for a couple years as a middle reliever (compared to the entire population of baseball players, that’s incredible for one pitch!). But as we’ve said for years now, if he could just throw his fastball – which has huge velo and spin – anywhere in the strike zone with consistency, he’d be a setup-caliber reliever. Maybe more. I’m not even talking about LOCATING his fastball OR his slider consistently. I’m talking STRICTLY about being able to throw the fastball for a strike from time to time. That’s all it would take. Then you bust out the frisbee and guys just don’t know what to do with themselves. He’d be Carlos Marmol.

•   Alas, we’ve yet to see the fastball consistently in the zone, so we’re left to just keep on dreaming. Maples, 28, has one minor league option year left, so if he uses that up here in 2020, it’s make-or-break-it time next Spring Training. It’s a shame that this year was such a messed up one for him (which, obviously, is not unique to him).

•   This is a very cool new feature, which we talked about as having even more potential impact for the Cubs:

Cool new feature from @WatchMarquee. You can see the amount of feet the wind adds to the baseball. Wind will aid balls hit to right center, as you saw with Willson Contreras basket shot. Homer Bailey thought it was was going to be a fly ball out to end the inning #Cubs pic.twitter.com/SslLEu4DCE

•   The best reliever we’ll ever see:

2 years ago, the greatest reliever of all-time (@ARizzo44) made his pitching debut. pic.twitter.com/8tZ8vymX65

•   Phones, speakers, and more are among your Deals of the Day at Amazon. #ad