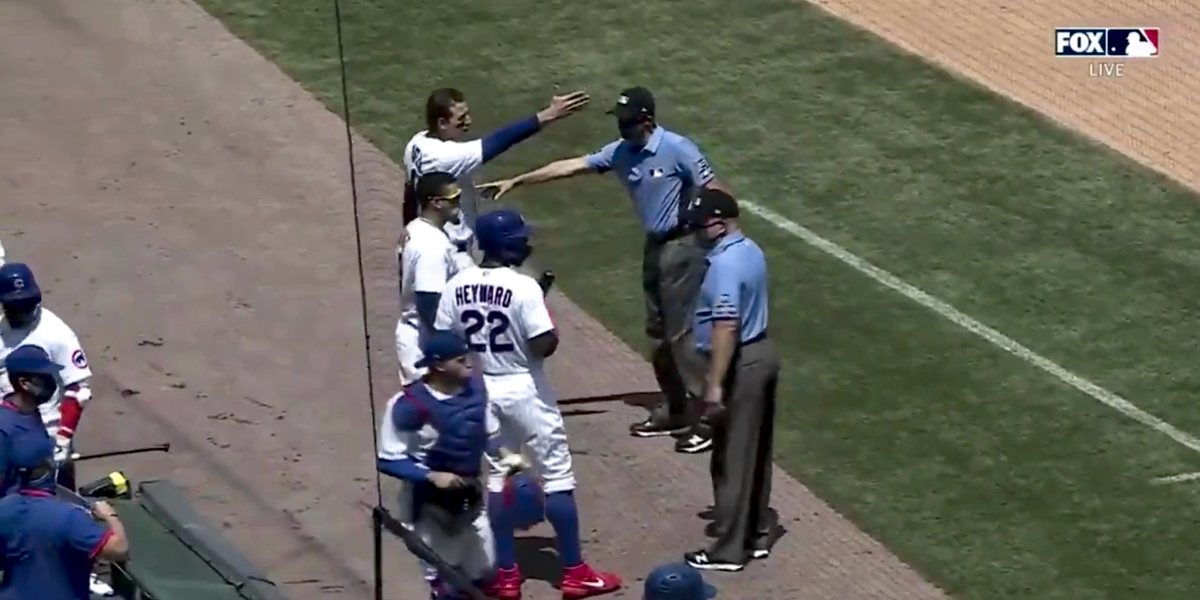 Rumbles and skirmishes and broohahas are already forbidden in baseball, but in a year of extra health and safety protocols, squaring up with other players is even more forbidden. Whatever that means.

So, then, when Cubs and Brewers players started to leave their dugouts in today’s game, it already felt pretty odd. Nothing actually happened, but it was sort of like … uh oh … what are these guys doing … don’t do this. And then it felt even more odd, because it was like, what actually just happened?

Here’s the look at it:

After the 3rd inning, things got a little heated as the Cubs and Brewers had some words to say from their dugouts. pic.twitter.com/IdkGwzt7Mr

Gotta love Christian Yelich jumping the railing like … do I have to do this? OK, I’ll just kinda do this. Do I seem appropriately tough?

Brewers starter Corbin Burnes had some difficulty commanding his fastball inside, hitting Javy Báez on the arm and nearly hitting Willson Contreras even higher than that. Each of Báez and Contreras seemed immediately displeased – more than you’d normally expect – but it still wasn’t clear if that was exactly why the sides started beefing.

During an in-game interview immediately after the dust-up, Brewers manager Craig Counsell suggested that the root was essentially chirping from the opposing dugouts that you normally wouldn’t be able to hear. A guy says a thing, another guy responds, and so forth. Usually, you’re just kinda shouting angry-in-the-moment things to yourself and your teammates. But this time, the other guys could hear each other. Also, the umpires could hear it, so it seems like maybe they moved to calm things down a little more quickly than usual.

After the game, it sounds like David Ross said something very similar:

David Ross on how dugouts can hear each other more than a normal season fueling some back and forth chirping: pic.twitter.com/tI4lG21EGl

So apparently this is going to be a little something teams will have to deal with this year thanks to the lack of true crowd noise. Tensions may run high at times and they’ll be able to hear every snipe.