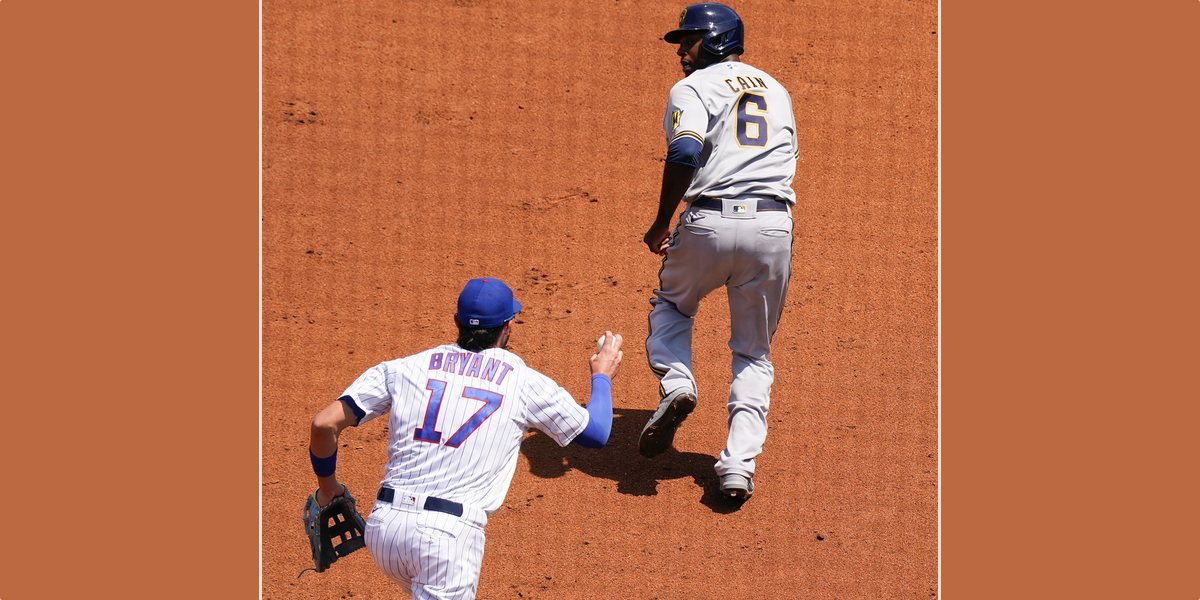 I’m not sure you can ever excuse a big league team for screwing up a rundown, but I suppose if it’s gonna happen, it’s probably gonna happen when you’re way outta practice. Shrug. That still feels like an excuse. So I take it back. This was really, really bad.

If you missed it yesterday, in the second inning, the Cubs had Lorenzo Cain toast coming off of second base, but made at least one too many throws – particularly the kind where you’ve not narrowed the runner’s space, and you’re giving him all kinds of running room – and Cain took advantage:

The Cubs are going to new levels to keep everybody safe. #ThisIsMyCrew pic.twitter.com/qiTtaQcwlp

To be sure, it was ALSO a major screw up not to have someone manning first base, which would have allowed the Cubs to just walk the ball to second base for an out. But even the rundown itself has to be executed much better, and more quickly, than that. I have no idea why Kipnis didn’t help squeeze in on Cain after Báez and Bryant had successfully narrowed his area *OR ALTERNATIVELY* why Bryant didn’t just keep pushing Cain back to second. Either way would’ve worked. But instead, you had Kipnis hanging back and Bryant throwing early. That opened the door to what followed, including nobody hanging at first base.

Not only did the gaffe ultimately lead to the tying run scoring, it cost Yu Darvish another 10 higher-stress, labored-inning pitches. Who know what impact that had on his inability to rein in the command in the 3rd and 4th innings? That’s always the hidden cost of giving the other team free at bats. Doesn’t mean this play turned the game – it probably didn’t. It just means you can’t know the full cost for sure, and you can know that it definitely hurt.

And the ultimate humiliation? This wasn’t the first time this exact thing has happened to the Cubs against the Brewers, who made appropriate fun of the situation two years ago:

Abbott and Costello have nothing on Yelich and Cain. pic.twitter.com/u759Bx2lae

On that one, the early throws didn’t help, but also, why do you wind up with four Cubs at second base and not a single one at first base? How can that be the correct alignment, with multiple players at home (again)?

The Cubs’ manager had only superficial public comments on the situation, which I think is probably fair when it’s the second game of the season:

Ross, on the botched run-down in the second inning:

Here’s hoping there was a little more detailed conversation with the coaching staff and the players to make sure they’re on the same page in the future so this doesn’t happen for a third time against the Brewers ….