The Yes and No of Early Bullpen Evaluation, Darvish's Reaction, and Other Cubs Bullets Skip to content 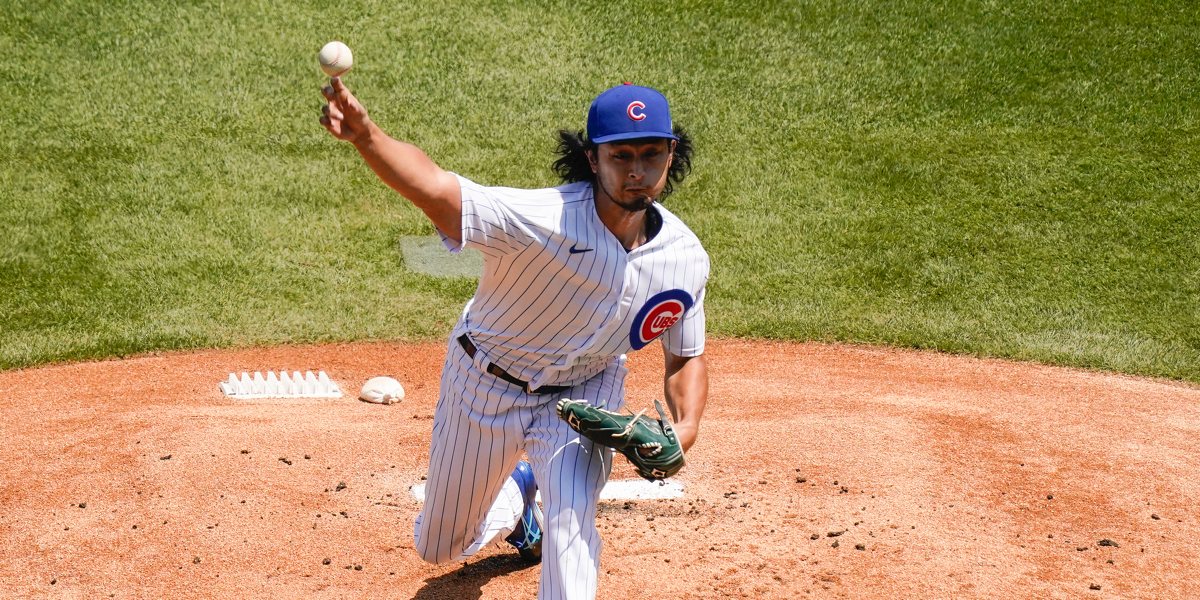 The bad news is the “medium” steak I ordered to go on Friday night wound up being “well done.” Always a to-go risk when it comes to steak. The good news is that the leftover half still wound up making for a very nice steak sandwich yesterday. Better than nothing!

•   I’ve been thinking for about 12 hours now about how to frame comments about the bullpen after yesterday’s game, because there are so many ways to put it. I still stick with the main message being a version of “I don’t really think anymore more or less than I already did before the game.” Because why would I? Whatever we thought we did or did not know about the bullpen as a whole, here’s what we saw: five out of eleven(!) total relievers, three with bad results, two with great results. Unless you’re ready to tell me that yesterday (alone) convinced you Rex Brothers and Dillon Maples are the best relievers in baseball, I don’t really want to hear that yesterday (alone) convinced you Duane Underwood, Brad Wieck, and James Norwood are toast. Yesterday’s performances can provide you some additional information, absolutely, but for that to change your entire mind about the WHOLE bullpen? Get outta here. Not only was it ONE GAME, we haven’t even seen Kimbrel or Jeffress or Wick or Winkler or Ryan or Sadler yet at all. I think about the bullpen today exactly the same things I thought about it on Friday.

•   To that end, here’s my primary concern: When you have this many high-risk, high-upside relievers, it was always the case that games were going to be blown early while the group sorted itself out. It’s gonna happen more in the coming weeks. As I’ve said, it was a strategy I liked best for this group when we were looking at a 162-game season, and it’s a strategy that is probably gonna really burn the Cubs up in a 60-game season. Not much can be done about that part now, except for studying the underlying data from performances and making informed decisions on roles as quickly as practicable.

•   Speaking of which, here’s how I thought about each of the three in-question performances, each of which was concerning in its own way:

⇒  Underwood: He had decent velocity on the fastball for the first outing, and threw a couple really good changeups. I don’t know why he threw the curveball only once after that thing looked like a revelation for him, and the command wasn’t all that great. Still, the pitch to Justin Smoak that hit the foul pole was above the top of the zone, so it wasn’t THAT bad of a pitch.

⇒  Wieck: Total loss of control to Eric Sogard ahead of Christian Yelich, but then good work against Yelich … until the truly awful, awful 1-2 pitch. A dickball fastball right down the middle, and Yelich destroyed it. The big concern with Wieck actually goes back to Summer Camp: his fastball velocity is down about three clicks from last year. Is that because of the weird ramp up period (he also had a minor heart procedure during Spring Training, you’ll recall)? Or so something else going on? At 93-94 mph on the fastball, with his curveball, he can be a nasty late-inning option like he flashed last year. At 89-91 mph? He’s a middle reliever at best. (UPDATE: Might be his leg. Wieck is headed to the IL.)

⇒  Norwood: He avoided the heart of the zone, but everything was mid-level. He needs to either work down in the zone with the fastball (so that the nasty splitter drops from there below the zone and guys have no prayer), or stay up at the top of the zone thanks to his premium velocity. But if he’s right there in the middle? It doesn’t matter if he lives at the edges, he’s gonna give up some rockets as he did, and he’s also not going to get guys to offer at the splitter, which they did not.

•   One reliever thing to appreciate and also sigh about:

•   If he could do that at will? Pair those two pitches together, located like that? I mean, no one could do anything against him. SIGH.

•   As for Yu Darvish, I mentioned most of my thoughts in the EBS, but I did want to hear from him. He actually sounded much more positive about the outing than I expected, especially with his fastball (The Athletic): “I want to throw more splitters and changeups. I need that pitch for sure. My fastball and two-seam was good today and soft cutter was good. I want to work on my splitter, changeup and hard cutter …. My strength is 100 percent. I have a lot of pitches, so I have to figure out a lot (more) things than other people. So I still have to work on a couple things, but I’m almost there.”

•   The good news, for sure, is that Darvish looked physically good. His velocity was great, his movement was what you’d want to see. To me it just looked like he had trouble commanding his fastball horizontally, and trouble commanding his changeups/splitter vertically. Not unlike the bullpen, the question is whether Darvish can get locked in quickly enough to have a sizably dominant stretch this season.

2,646 days since Daniel Bard pitched in a MLB game.

Today, he picked up his first win since May 29, 2012. pic.twitter.com/nlkM7BoJlE

•   If you’re in the South Bend area, you can have some socially-distanced fun watching Cubs games:

•   Big discount day at Fanatics (plus free shipping) through midnight:

Heads up to a Fanatics one-day sale (today only, plus free shipping – tons of Cubs stuff heavily discounted: https://t.co/SondUuSDMF pic.twitter.com/ghmfgT4gQB