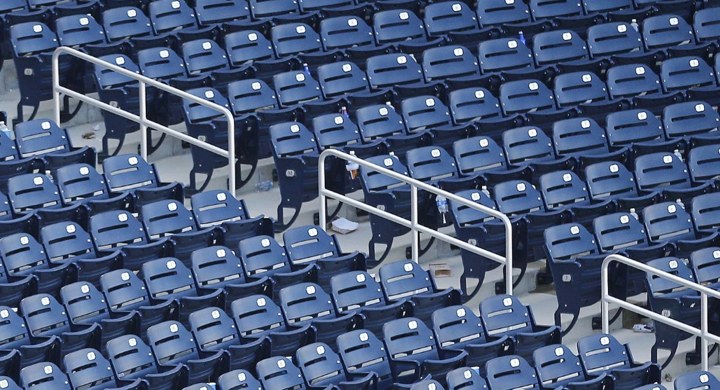 As of this moment, two baseball games have been canceled for today – the Marlins and Orioles in Miami, and the Phillies and Yankees in Philadelphia – all in response to an outbreak of COVID-19 on the Marlins. Upwards of 9 to 11 players have tested positive, and 2 to 5 additional personnel.

MLB officially released a statement on the situation, though it’s about what you’d expect at the moment – we’re checking things out, and we’ll let you know more when there’s more to know:

MLB's official statement is out, and it's more or less what you'd expect: a version of, "We're testing. We'll let you know." pic.twitter.com/xsNACtJLqP

Terming the games “postponed” for now.

I presume that MLB is hoping that shutting down the Marlins (players/personnel) and Phillies (staff/facilities) for 24 hours will give them enough time to conduct tests and get negative results. And if it plays out that way, maybe things continue on for another few days or whatever until there’s another outbreak.

… but what if it doesn’t play that way? What if, for example, a Phillies player or two now tests positive? Even if the player(s) didn’t actually get it from the Marlins that quickly (incubation periods and all that), how in the world does MLB justify continuing this week in that moment? Moreover, because of the incubation periods, are we really going to know that the Marlins didn’t spread this until next week or later? This situation is a mess, and even the hoped-for negatives today aren’t really going to resolve it. A positive test or two here and there with testing and contact tracing efforts? That can justify playing. But actual person-to-person outbreaks in a clubhouse? And maybe extending out of the clubhouse? That’s when you really start to question whether the whole thing needs to be suspended for a period of time.

For his part, Marlins Owner Derek Jeter just put out a statement appearing to suggest that this happened because the team traveled (though that doesn’t necessarily square with what we know about the typical incubation period):

Like Jeter, I have no idea where this goes. The league and its owners have a pre-arranged call scheduled for 11:30am CT, which is actually probably great timing:

MLB has its scheduled call with all 30 owners today at about 12:30 pm Eastern. That suddenly is a different call than it would have been 48 hours ago.

We’ll keep you updated, including on whether the Cincinnati Reds suffer any additional positive tests and how that might impact the Cubs, who are due to play there tonight.

UPDATE: The Orioles have already decided they won’t be sticking around for tomorrow’s game no matter what:

So, that means no game at Marlins Park tomorrow.