Chicago Cubs Lineup: Bryant Does Not Return, But the Greatest Leadoff Hitter of All-Time Makes an Appearance Skip to content 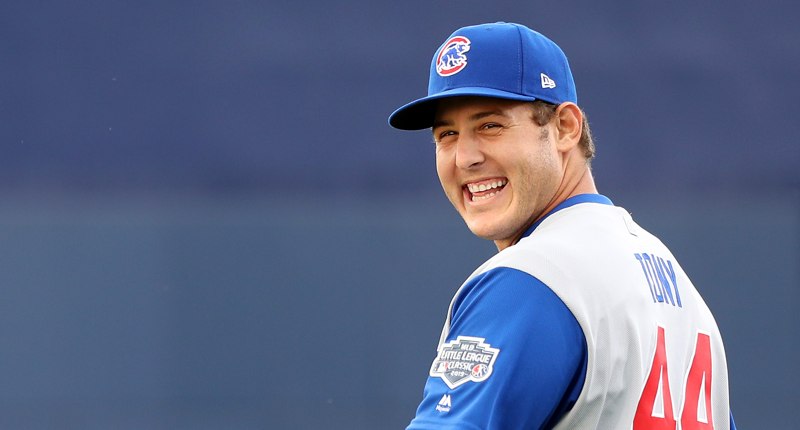 The Cubs won last night … barely. And they’re back at it again today with another 5:40 start against the Reds. Here’s how David Ross will line ’em up with the righty, Tyler Mahle, on the mound.

Last night, Kris Bryant was removed from the lineup late in the game against the Reds and there was no real discussion or explanation of the decision. Given his absence from the lineup today, you do begin to worry. I’m not going to speculate without any information, but just take note and keep a heads up for any other news (UPDATE: Not a big deal, just some regular bumps and bruises, if the Cubs are to be believed). David Bote is covering third base for Bryant tonight.

With Bryant out of the order, Anthony Rizzo will once again take up the mantle of Greatest Leadoff Hitter of All Time, while playing first base. Victor Caratini, behind the plate tonight, bats second, keeping the Baez/Schwarber middle-of-the-order in tact.

As for the rest of the group, I think the lefty/righty splits can explain a lot:

Lefties have nearly a .100 point wOBA advantage against Mahle than righties, including 30 home runs in just 116.0 innings compared to 17 HRs for righties in 145.2 innings. Needless to say, getting Jason Kipnis in there at designated hitter (with a night off for Willson Contreras) makes plenty of sense. As does returning Ian Happ, Jason Heyward, and Caratini to the starting lineup, all of whom can bat from the left side of the plate. All told, the only righties Mahle will face are Javy Baez, David Bote, and Nico Hoerner.