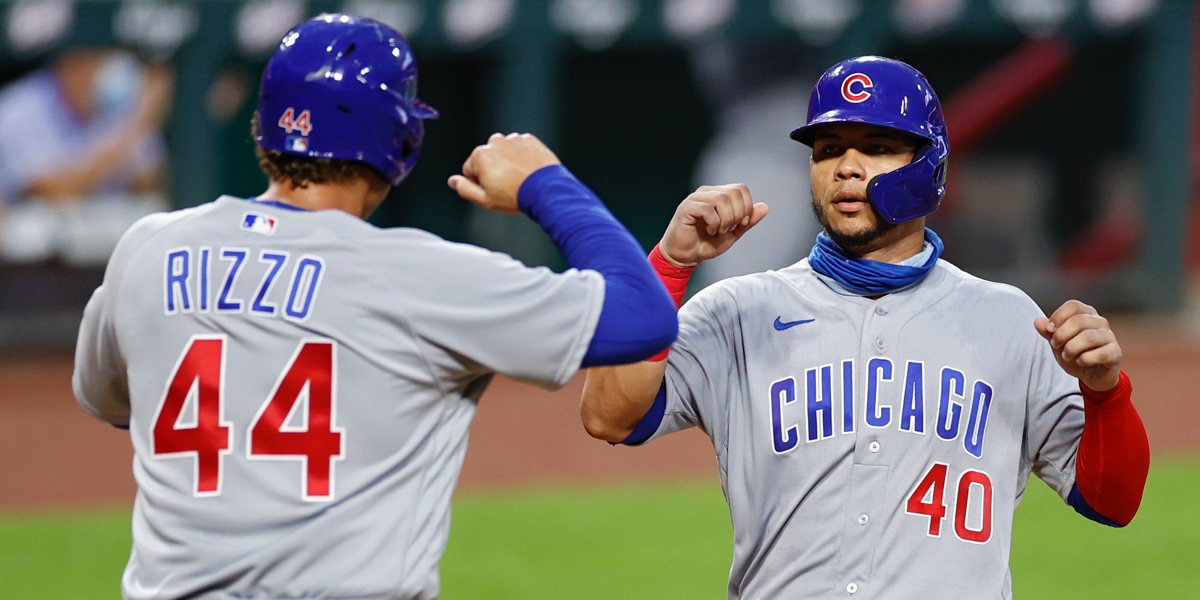 •   We’ll have to do a much deeper dive than a single bullet, but the eye test says it’s already clear that Willson Contreras’s pitch framing has improved dramatically. Maybe even to the point where he’s not just “not the worst,” he might now be … elite. The stolen strikes (and no lost strikes) have been that impressive. I know the glove movement can look exaggerated, but when you’re getting outside the ball and moving it toward the center of the zone, apparently that’s from the prevailing school of framing guru teaching. Because it works.

The comically early offensive leaderboard in the NL (via @fangraphs) features two Cubs in the top 13: pic.twitter.com/B7RydIX1HL

•   Fun fact there? Note that Rizzo’s impressive slash line exists DESPITE not actually having a hit on a ball in play yet this year! His only three hits have all been homers. And he’s also been hit by four pitches already this year. Anthony Rizzo is gonna be the first ever 40-40 player (homers and HBP), and he’s gonna do it in 60 games.

In 4 innings the Cubs bullpen threw 129 pitches and only 62 of them were for strikes.

Yes, it was as stressful as you thought watching.

Tonight the @Cubs escaped Cincinnati with a win despite going to a 3-2 count on 6 different Reds batters in the 9th inning.

The 6 full counts are tied for the most any MLB team has faced in a single 9th inning since pitches were first tracked in 1988.

•   Great read here from Jordan Bastian on how Tyler Chatwood’s cutter not only pairs well with his two-seamer (obviously one moves glove side, the other moves arm side, all on the same-ish plane), but also how it creates a new velocity tier for him. I hadn’t really thought about this factor in Chatwood’s cutter’s success: his fastballs are 95ish, and his curveball/changeup are 80-85ish. Get the cutter in there at 90/91, and it’s not just a different moving pitch, it’s also another way to change speeds on a guy.

•   Board games and card games among the Deals of the Day at Amazon today. #ad

•   This Albert Almora catch was the play of the first week in baseball, which is apparently a thing:

Albert Almora's incredible catch yesterday was just named MLB's Play of the Week, which is a thing! pic.twitter.com/M3yNmJeBDX

•   Phillies manager Joe Girardi on the state of things, with his team effectively shut down because an opponent team had an outbreak:

Girardi: "I think this is a great wakeup call for baseball … our team has been fairly disciplined. I think the reason why is we had the Clearwater incident. It was real to us. There are players and coaches in our clubhouse that went through this and saw how quickly it spread.”

•   Major Bears news – all the best to Goldman and his family: