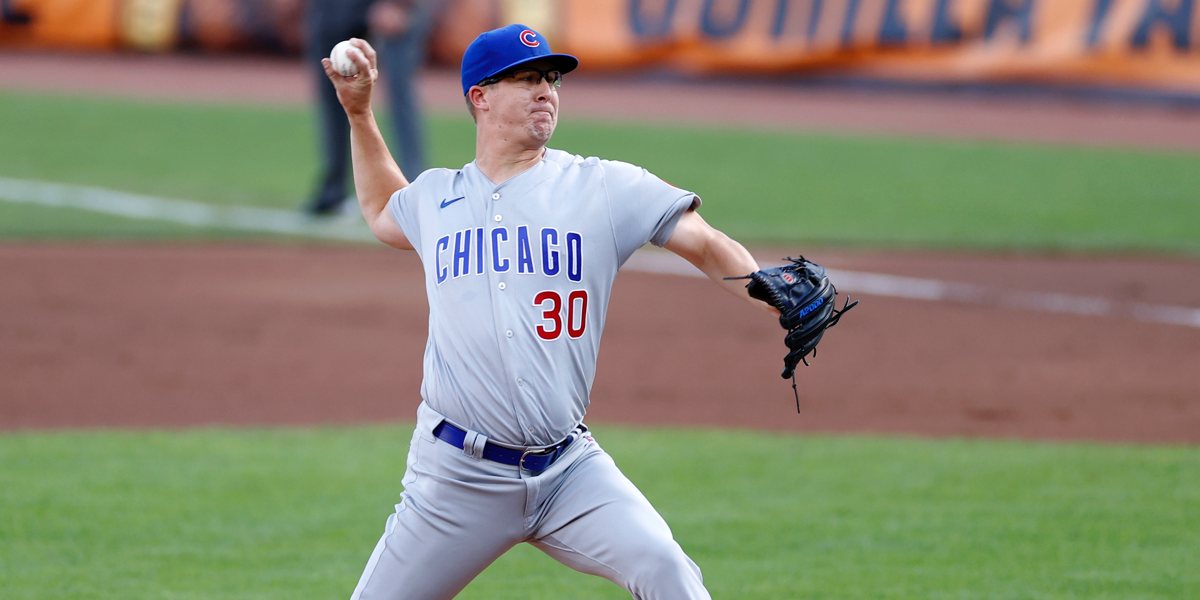 Just two days before the end of July, and the Chicago Cubs are tied for the best record in baseball. Truly, this team is special.

I joke there, but even a five-game sample really moves the needle in a season like this:

Say, what's it look like when you get off to a hot start in an extremely short season? pic.twitter.com/sEvmm5R1uO

•   What a great debut from Alec Mills, who went 6.0 innings, allowing just two hits and two walks, two earned runs, and striking out three. He also got a whopping 10 groundouts (58.8% for the game). Mills commands so many pitches that he can really keep guys off balance – his command isn’t QUITE as good as Kyle Hendricks and he doesn’t have a plus-plus pitch like Hendricks’ changeup, but he makes up for those things by having five different good pitches that he locates pretty darn well. Last night, he threw 20 four-seamers (90.4 mph average), 19 sinkers (90.3), 17 slow curves (67.2), 16 changeups (80.5), and 5 sliders (78.7).

And if that's it for Mills, not only was it six good innings in the results column, it was also fantastic contact management. Castellanos got him when he grooved one, but otherwise nobody was hitting Mills hard: pic.twitter.com/kXg4wvUarR

•   As for Mills, himself, he’s been waiting for this chance (Bastian): “In my heart I always felt like I belonged. It was just a matter of them giving me the job. Me earning it and then them giving it to me. Obviously what happened with [Quintana] is unfortunate, but I just want to take this and run with it and make them make the tough decision.”

•   No one wanted to see Quintana get hurt, and it is still the case that other guys in the rotation could get hurt from here and cause serious problems. But it is a silver lining that Mills, 28, is going to get this look right now, given that Quintana is a free agent after this year (and also Tyler Chatwood and Jon Lester), and Mills is under team control. It would be very helpful for the Cubs to know more about what they have in Mills as a starter before this offseason.

•   Speaking of Quintana, he is reportedly due to throw a bullpen session today for the first time, so we’ll likely hear later about how that went. Can I start telling you about a dream scenario? Quintana is able to return in mid-to-late August, but the rotation is so healthy and clicking so well that Quintana becomes a two-inning reliever down the stretch, and he dominates in that role because he can just exclusively lean on his fastball/curveball combo.

•   I wonder if we’ll also get an update on Kris Bryant’s sore left elbow. Obviously IL stints this year come at a premium given the short length of the season, but I am already itchy thinking about the Cubs once again letting a position player play through a “mild” injury, him never getting over it, and his performance suffering because of it. Arguably, that’s already happened twice with Bryant, specifically.

•   Ross on Bryant here – he’s feeling it on the swing extension:

•   Casey Sadler hung a cutter to Curt Casali last night, but otherwise looked nasty, getting five swings and misses on 19 pitches, including this hilarious one:

•   Ryan Tepera also looked nasty (turns out he’s actually throwing a cutter in the upper-80s and a slider in the low-80s that look very similar, but are each giving batters fits). He got 7 whiffs out of 23 pitches. Yes, Tepera gave up the two-run homer in the 9th to Freddy Galvis, but if you watch it, you’ll see that (1) it’s not a bad pitch and it’s kind of incredible what Galvis was able to do with it, and (2) that’s a lazy fly out in most parks (the contact quality at Statcast gave it a mere .110 expected batting average):