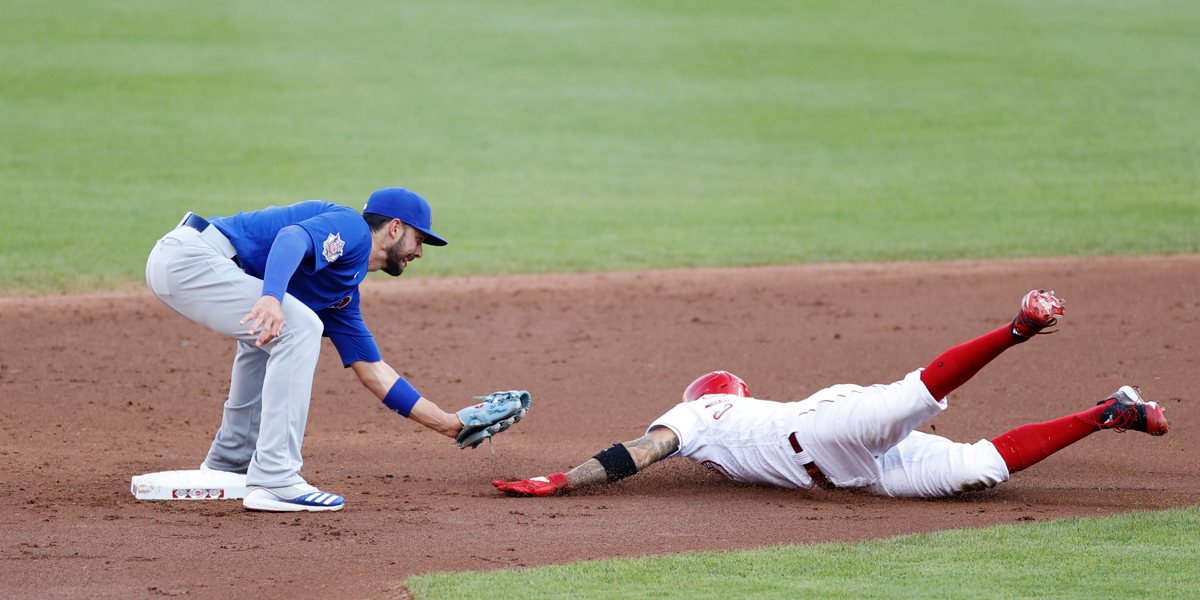 It’s been so long since I was doing Enhanced Box Scores on the regular, it’s taking me time to get back up to speed on getting the right ideas for what I want to do as the game plays out, and then put together the creation, itself. This is like my Spring Training on that. But what I didn’t expect to goof was putting last night’s EBS in the ‘Bulls’ category. So if you were wondering where it was last night, well, that’s where. My bust.

•   Coming into last night’s game, there were just two players in all of baseball who had at least five batted balls and had a higher average exit velocity than David Bote’s 100.3 mph (Giancarlo Stanton at 106.5 mph (lol) and Jaylin Davis at 102.0 mph). That is to say, much like he always has at the big league level, Bote has hit the crap out of the ball so far. And then he did this in his one PA last night:

•   Yes, Bote has a lot of swing and miss in his game, but he doesn’t have obvious splits, he has huge power, he makes pitchers work, he takes his walks, and on and on. The guy can hit. We knew this last year, and he’s showing it already again this year. I understand that his primary spots would be third base (Kris Bryant) and second base (Nico Hoerner/Jason Kipnis), but the Cubs have to continue to find ways to get his bat in the lineup. Yes, you pick your spots and still limit the exposure where appropriate, but he can probably contribute more. He’s likely that good.

•   The Reds got back a couple guys who homered last night, Mike Moustakas and Nick Senzel, who’d been held out for a few days after self-reporting illness symptoms (but otherwise testing negative for COVID-19). Kris Bryant had a pretty great response when asked about the situation, and the fear that guys would not want to miss games by self-reporting:

Kris Bryant said he thanked Mike Moustakas tonight for following protocols and speaking up when he wasn't feeling well: "That's how we're going to finish the season."

•   Bryant is, of course, exactly right. As we’ve seen with the Marlins, the biggest risk to the season is a situation where the virus gets into a clubhouse and the team/players don’t have their arms around it before it’s too late and it has spread rapidly. Testing will help, of course, but we know the limitations.

•   Remember how I was talking about hitters telling you what they’re seeing, in the context of no one so much as blinking at Craig Kimbrel’s curve? This is what it looks like when hitters cannot tell for shit what pitch is coming out of a pitcher’s hand:

•   Anthony Rizzo is just so dang good at first base. You could try this scoop on a spiked Javy throw 50 times, and 49 of those times you’re eating the ball in the face:

Holy shit look at this pick from Rizzo on a million mph throw from Javy pic.twitter.com/9G59mmDPMZ

•   The Cubs had some fun making this GIF of Kris Bryant’s “catch” to start the triple play:

•   Of course, Bryant missed the chance at the ever-elusive quadruple play:

Kris Bryant said he was "convinced" he caught the ball in real time on the triple play. Then he quipped: "I should've just threw it to second and then he'd throw it to first and then it would've been four outs."

•   What I found most interesting about the Nick Castellanos grand slam is how well it illustrated that a pitch can look not too bad in isolation (96 mph four-seamer well above the strike zone in a 1-1 count), but if misses the target by a mile (was supposed to be down and way inside), there’s probably a reason it wasn’t supposed to be there:

•   Think about it, and it will become clear: