Who Was That Cubs Bullpen? Pitching to Javy, Winkler's Way, the Rainbow, and Other Cubs Bullets Skip to content 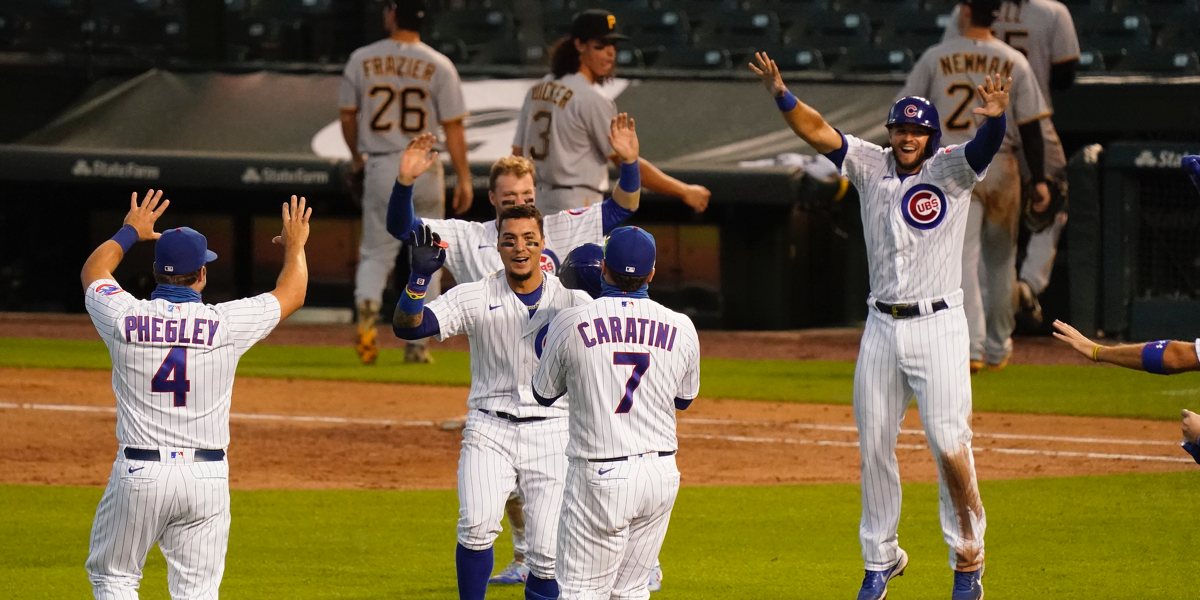 We rounded up a bunch of stuff this weekend for donation, which included a lot of my shirts. I was running out of space, which means I even had to include … gulp … a fair bit of Cubs gear. 🎶 it’s so haaaaard … to say goodbyyye … to yesterdayyyyyy 🎶

•   Before yesterday, the Chicago Cubs bullpen had thrown 24.0 innings, thankfully the sixth fewest in all of baseball (and third fewest among teams that haven’t had a bunch of COVID postponements). In those few innings, they’d allowed a whopping 26 earned runs, the second MOST in all of baseball! Do a little math, and yes, that left the bullpen with a league worst 9.75 ERA. The Reds, second worst, were more than TWO RUNS BETTER. The Cubs’ wOBA against was a monstrous .450, some 60 points(!) worse than the second worst team. They were yielding the worst OBP by 44 points. The worst SLG by 79 points. We made a lot of jokes about the bullpen, but it wasn’t just stale retreading – the bullpen really had been comically awful.

•   So, then, for the bullpen to work five scoreless innings yesterday – including two with a runner starting on second base – was really shocking, whatever the opponent. That one game dropped the Cubs’ bullpen ERA by nearly two runs, down to only 8.07.  Their wOBA against is now only .420. Yup, still worst in baseball on both counts, but the margins are diminishing!

•   In fact, the bullpen was so good yesterday, I couldn’t use the obvious “when the bullpen doors open” tweet for this Willy screenshot:

When you see the Cubs coming up on your schedule. pic.twitter.com/slAkdw25VK

•   Of the bullpen performance, I think it was easy enough to see that Casey Sadler, outside of that first nerves-and-sweat-induced control problem in his first outing, has looked great. Great results, great command, great stuff. He’s definitely A Guy at this point. Ryan Tepera was already trending toward being A Guy for me based on how he looked in the spring and Summer Camp, and he was more or less fine again yesterday – teams really can’t do much with that cutter. He gave up a rocket on his sinker, though. Jeremy Jeffress can be trusted not to implode, though I think it’s still an open question how effective he can be as a late-inning guy with diminished velocity (he topped out at just 91.5 mph yesterday).

•   Then you’ve got Dan Winkler. On paper, and on viewing his Spring Training performances, he was the guy I was most excited about in this group of buy-low, not-quite-established-but-has-had-some-success types. He generates elite spin, gets great movement, and I think his distractingly max effort delivery has to make it pretty hard for hitters to pick up the ball out of his hand right away. But at the same time, I don’t yet know what the Cubs have because his four-seam velocity is a little up with the Cubs (94ish with great elevation), his cutter velocity is down (88-89 after previously being more like 90-91), but he’s leaning EXTREMELY heavily on the cutter. In fact, he didn’t even throw a single fastball yesterday. It was cutter, cutter, cutter, cutter. He even busted out five curveballs for get-me-over strikes to pair with the cutter. It was an impressive performance, but I guess I want to see that he can sustain it with that delivery (so easy to get your mechanics out of whack, I would think), and I want to get a better sense of what the pitch mix is gonna look like.

•   But he’s definitely very interesting, because no one looked comfortable up there:

That’s how Winkler is gonna succeed: commanded up in the zone, using that low release point and high spin to beat hitters with his unique vertical approach angle.

•   Educational toys, electric toothbrushes, bed covering, and more are your Deals of the Day at Amazon. #ad

•   I’ve seen a few folks dumping on the Cubs for high-fiving after the socially-distanced walk-off celebration yesterday, but I think those criticisms are missing the mark. The only high-fives I saw (I could be wrong!) were between players/coaches where at least one was wearing a glove. Prefer not to do it at all? Sure. But I don’t think you’re really crossing a line at that point. And as for the celebration at a distance, the point there was the message, and it was a good one:

Schwarber on this celebration:

"I wanted to bring out the mask and have everyone jump on him. It was pretty good there. I think everyone wanted to dogpile Javy, but then we were like, let's keep it down a little bit, let's be cool, show that we're being responsible here." https://t.co/00EBZsMQl3

•   I love seeing quotes like this from opposing managers, in this case about Báez cutting down the lead runner in the 11th inning (Pirates.com): “I think we have to be a little more aware of where Báez is on that play right there and also knowing how well Javy moves and how well he throws,” Shelton said. “We just have to be more aware in that situation.”

•   The Pirates also talked about not pitching to Báez in the 11th – runner on third, one out, I really don’t know why you wouldn’t just stay super away (not that Willson Contreras is much fun after Báez) – but Shelton said with a youngster on the mound who was just added off the taxi squad, he didn’t necessarily want to put more traffic on the bases. Kay, but that traffic could’ve helped you get a double play and get out of the inning? My better guess? That youngster, Cody Ponce, was supposed to just throw sliders waaaay off the plate until Báez either got himself out or walked. Ponce goofed on the location, and his manager wanted to protect him.

•   After the Cubs’ win – and the accompanying rains – a beautiful set of rainbows blanketed the city. Show me a better arch over a city (you can’t):

Double Rainbow over the Chicago Skyline on Sunday. My 4th rainbow in the past 7 days. Crazy. #weather #news #ilwx #chicago pic.twitter.com/2NKGTyJ29M

•   When Tyler Chatwood is getting the early FanGraphs treatment, you know there’s something legit in what he’s doing (and, indeed, drilling down on the early strikeout rate suggests it’s largely been earned):

Tyler Chatwood and Strikeouts Have a Meet Cute https://t.co/3VhJXTDzQ1

•   Sure enough, when Anthony Rizzo reacts this strongly to a call, you know that not only was it wrong, but it was not close:

•   We’ll see if Kris Bryant is able to return to the Cubs for today’s game against the Royals. He has not tested positive for COVID-19, but because he self-reported symptoms on Saturday night, he has to go through certain (still-kinda-unspecified-publicly) protocols before returning.