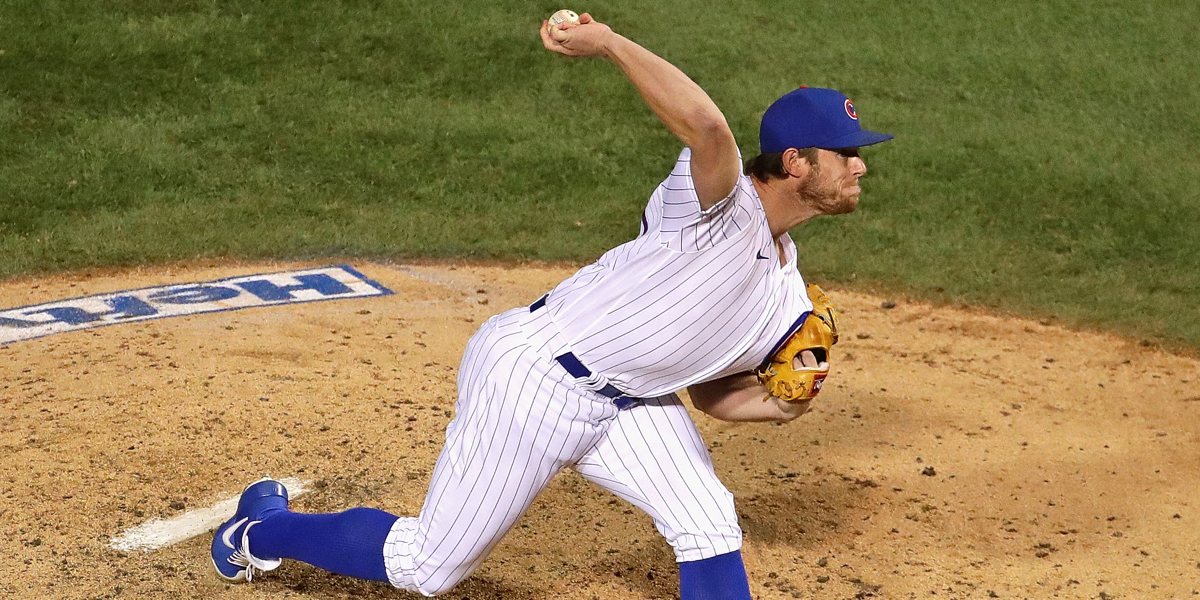 Look, I don’t want to suggest that our friends at Obvious Shirts have magical powers, but it is my job to relay facts: through 10 Cubs games, I have been wearing an Obvious Shirt eight times (all Cubs wins), and wearing something else twice (both Cubs losses). One of these days soon, I have to NOT wear an Obvious Shirt again, just to test it. So when the Cubs lose next, you’ll probably know what happened.

•   In a two-run game and a clear, “normal” save situation, David Ross did not go to Craig Kimbrel in the 9th last night, even though he was clearly rested. Instead, he let Rowan Wick carry over from the 8th for a four-out save. It was unquestionably the right move, even if it was probably a hard one for a rookie manager. We know that Ross and Jed Hoyer say Kimbrel is just working out some mechanical issues, and here’s hoping he is able to do that on the side and in low-leverage spots. Until and unless he crystal clearly establishes that something is “fixed,” you cannot run him out there in tight spots right now. Sad, but true. Kudos to Ross for making the change after just two outings (both of which the Cubs won).

•   So … who is the Cubs’ closer right now? Is it Wick? Is it Jeremy Jeffress, and he just happened to be down last night after pitching on Sunday? Good luck getting an answer from Ross just yet (NBCSC): “I think every night will be different. Every night we’re trying to find the best matchups and who’s throwing well …. It’s going to be a full team effort down there. I’m not scared to pull the trigger in a lot of areas with a lot of those guys. They’ve done a really good job of answering the bell here lately and we’ll continue to assess on a daily basis.”

•   I would normally guess that Jeffress, with his past closing experience, would be the guy most nights. He probably will. But he also has the confidence to go out there in late-and-tight, messy situations. You don’t really want to take him off the table in those situations because you’re saving him for the 9th.

•   More broadly, it’s looking like we’re starting to get a sense of the guys Ross is trusting the most – Jeffress, Wick, Casey Sadler, Ryan Tepera, and Dan Winkler – which may seem like an early conclusion based on only the last few games and also who was warming when. But this is how the Cubs have to go this year: make those conclusions early, and start riding certain guys, especially if they don’t have any real blips yet.

•   With all appropriate plaudits to the pitching last night, how about that defense from David Bote at third? He was a freaking highlight reel out there. I don’t even know which of these three plays is the most impressive:

•   Because of his involvement all over the infield, and because of some meh metrics in small samples, it’s been easy to forget how well-regarded Bote was defensively at third base coming up through the farm, and in his rookie debut. Yeah, he boots some easy ones, and maybe that’s an issue. But he certainly has good range, arm, and hands for third base. Nice to have available when you want to give Kris Bryant a break or, like last night, move him out to left field.

•   Some of this is good luck, sure, but MOST of it is the combination of terrible contact, lotta strikeouts, and great defense:

Through 10 games this season, @Cubs starting pitchers have held their opponents to a .156 batting average.

That's the lowest batting average allowed by any team's starting pitchers through 10 games of a season in the live-ball era (since 1920).#WhereStoriesPlay

•   This guy absolutely owned the Cubs last night, and when he wasn’t throwing this absurd curveball, he was throwing 100 mph:

The last time the Cubs started out a season 8-2, they wound up doing this: pic.twitter.com/RBglvl2Rpt