Craig Kimbrel Knows He's Out-of-Whack Right Now, and You Have to Hope He Gets It Back Skip to content 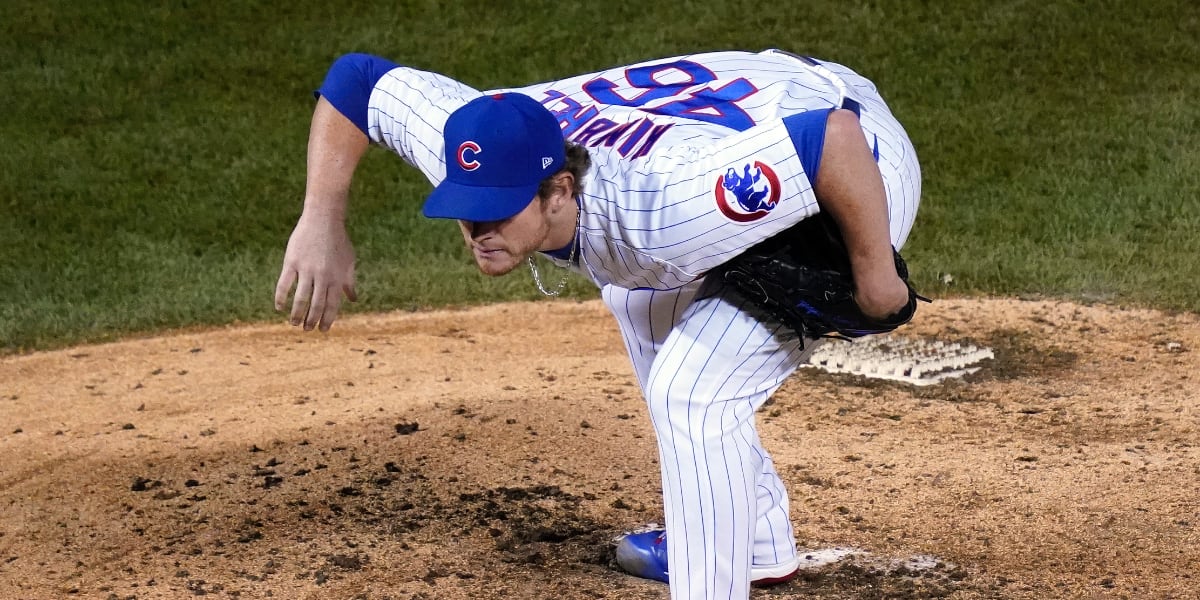 Although the severity and rapid onset of Craig Kimbrel’s extreme ineffectiveness is difficult to accept, the way it’s played out is pretty straightforward. Hitters have been able to *completely* lay off his once dominant knuckle curve (0 swings in 23 pitches this season), while sitting back on a fastball that lost some pep and is too often left over the heart of the plate.

No swings on the curve means fewer whiffs and less weak contact. More swings on the fastball, which is more hittable than ever, means more hard contact and fewer Ks.

In addition to getting effectively no swings on his curveball, Craig Kimbrel currently has the highest average exit velocity allowed in MLB (100.2 MPH). It's been only 8 batted ball events for him, but still … ouch.

Speaking of that hard contact, we may already have a pretty obvious explanation.

Statcast has a “fun” little stat called Meatball% which measures pitches left over the true heart of the plate, and although Kimbrel is at a very low Meatball% this year (5.3%), batters have swung at an absurd 100% of those pitches (historically between 70-80% for Kimbrel). Obviously, we’re talking about an extremely small sample and I expect that to come down just by chance, but still … it’s telling. Combine that knowledge with a cratering out-of-zone swing rate (see graph below), and literally zero swings on the breaking ball, and well … that’s Kimbrel’s 2020 in nutshell.

Batters have ignored every single pitcher’s pitch, because they know, eventually, they’ll get one they can crush. (Which they do, and they do.) 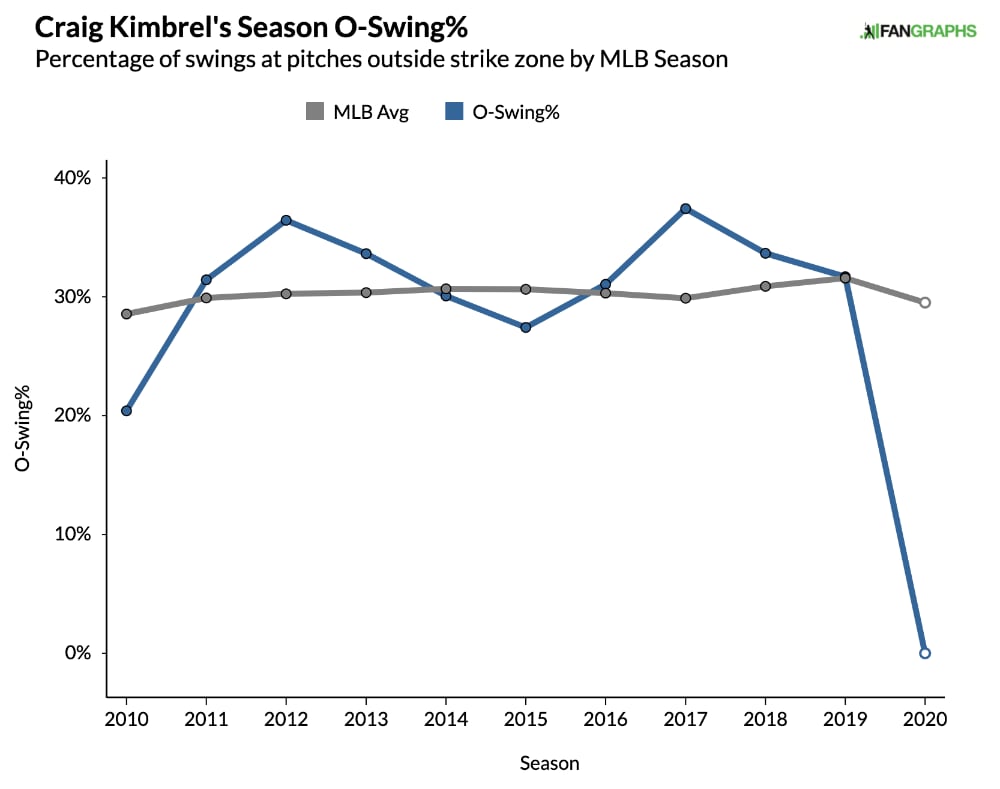 And every single one of these issues was particularly evident in his most recent outing against the Royals, when he came in for the save, but left with runners on second and third, after just three batters.

Kimbrel threw six curveballs, none of which generated a swing. And of the four swings he did generate with his fastball, two fell in for strikes, but the other two were absolutely smoked at 105 MPH for a single and a double, ending his night.

However, Kimbrel did manage to get one out in this appearance, and there may be some important lessons to glean from that exchange. Jordan Bastian of Cubs.com lays that out nicely right here:

To Kimbrel’s point about throwing some curves for strikes, Hottovy cited the 9th-inning AB vs. Cordero on Tuesday. Kimbrel got two called strikes with the curve, and was then able to get a K with an elevated fastball.

Hottovy: “You have to get them to honor it.” pic.twitter.com/0LsyF52HBY

Against the second batter of his outing, Kimbrel was able to place two curveballs in the strike zone, which put Franchy Cordero in protect mode, allowing Kimbrel to exploit the top of the zone with his fastball, striking him out. It won’t ever be as simple as “throw the curve for a strike and they’ll have to respect it,” but that’s certainly a good start.

Kimbrel acknowledged as much after the game:

Craig Kimbrel was asked for his take on why there have been zero swings to date this season vs. the 23 curveballs he has thrown. Here was his answer… pic.twitter.com/lu4bzRev6K

I asked Craig Kimbrel if, with all the talk of his mechanics, he felt mechanically out of whack or if he felt fine and just wasn’t seeing results? He talked about getting into “bad habits” and “showing the ball more”. Full quote below. #Cubs pic.twitter.com/dXDg17SeZ2

And so did his pitching coach, Tommy Hottovy, via Sahadev Sharma at The Athletic: “He has to have games like yesterday where he throws his curveball for strikes. You saw that Cordero at-bat especially. Cordero wasn’t looking for the breaking ball and he took two in the strike zone. You have to get them to honor it and to get them to honor it, you have to be able to throw that pitch in the strike zone and then be able to attack with the fastball.”

But throwing the curve for strikes is both easier said than done and also not the only problem. According to basically everyone in the Cubs organization who has commented on it (including the pitcher, himself), Kimbrel’s mechanics are all out-of-whack (particularly his arm slot, as Sharma explains), and that’s leading to lower velocity, worse command, and a declining spin rate: 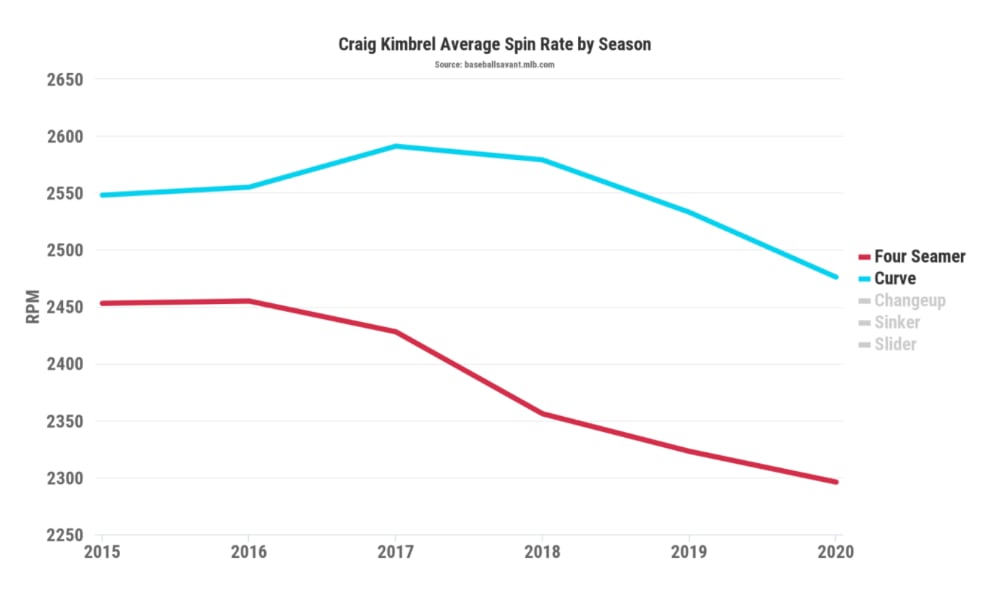 So even if Kimbrel does manage to move into the zone with his curveball, there is reason to question whether it will be as effective as it once was – at least not if current trend on his spin rate doesn’t get flipped on its head (or unless he somehow improves the spin efficiency).

The Cubs are working with Craig Kimbrel to correct very specific issues & believe consistency in mechanics will lead to consistency in results. “With every mishap or failure, you gotta figure out why you did that and what you need to do to become better.” https://t.co/EGKt3ITn5u

So for today, we must end where we began: with very clear issues to address. Kimbrel’s mechanics are out-of-whack, which has weakened the effectiveness of his curveball, as well as his ability to command it in the zone. And until he’s able to improve both aspects of his game, hitters will continue to sit on his fastball, which Kimbrel is locating poorly, and has also lost velocity and spin rate, allowing hitters to make more and harder contact than ever.

I suppose a known problem is better than being entirely left in the dark, but that doesn’t mean it’ll be easy to fix. At the same time – and despite the Cubs early season success – a productive Kimbrel is always going to be disproportionately crucial to the Cubs chances this season. For his sake and ours, let’s hope he can figure it out.