Grinding At Bats Like No Other Team, Jeffress Pumped, the 130-Win Cubs, and Other Cubs Bullets Skip to content 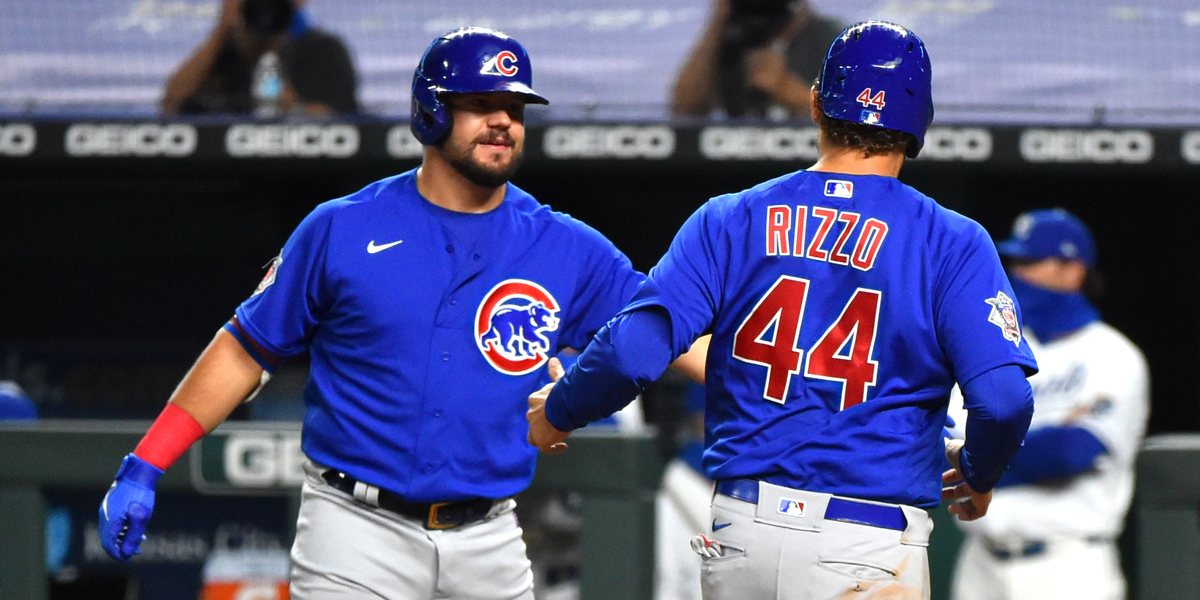 Joe at Obvious Shirts bumped the discount through today, so you can still use the code CUBS11316 to get 16% off your order, plus free shipping and free returns like always. Load up, folks.

•   The grind of the Cubs lineup right now has been fantastic, evocative of certain years past, where it seems like every guy is either seeing pitches or doing damage. When it looks like the opposing pitchers keep laboring out there, that’s a good sign. Here’s how Kris Bryant put it (Bastian): “It seems like there’s not really a letdown in our lineup. I can’t really remember a time playing for this team where it was really like that, where one through nine there was just damage all through the order. I think it shows in our record.”

•   Bryant is right, as it’s pretty steady production throughout the lineup (much of that disparity in later two trios is because of Ian Happ, who is now in the middle of the order):

Going into tonight, production from each third of Cubs lineup:

•   Right now, the Cubs sport the second best wRC+ (114) in the National League, behind only the Phillies (118). And as for the grinding? You guessed it: the Cubs lead all of baseball with a whopping 4.20 pitches per plate appearance. There are only two other teams in the National League even over 4(!) – the Reds and Cardinals (who’ve played 5 games) at just 4.03. Special shouts to Anthony Rizzo and Kyle Schwarber, who are at 4.57 and 4.63, respectively, top six in baseball. Also, the Cubs’ top four batters – so add in Kris Bryant and Javy Báez – are all individually better than league average in P/PA. Talk about a bitch right from the start if you’re the opposing starting pitcher. The last time the Cubs were this high up the charts in P/PA was … well … it was a certain year.

•   As part of that offense, with two huge games in Cleveland, Jason Heyward went from “having a terrible year” to “leading the Cubs in RBI”:

•   Heyward’s line is up to .256/.313/.419, which is good for a just-about-league-average 99 wRC+. I know, I know, the contract the contract yada yada, but we’re long past that at this point. The realistic hope for Heyward is that he can be an above average hitter overall (largely because he will hit down in the order against righties), while still being very good in right field. Get me that, and he’s a very good player to have on the team. The contract ain’t changing.

•   We’ll see if it’s part of him ramping up or if it was just a flukey hot gun situation, but Jeremy Jeffress was up 1 to 2 mph on his four-seam and sinker last night. Historically, he’s a guy who has ramped up the velocity as the year has gone on, but he also saw a pretty significant drop-off after 2017 that probably isn’t ever coming back. The thing is, with that splitter, I think he can be very successful at 94-95 mph. Heck, he’s been successful so far this year mostly at 91-93 mph. I’m very optimistic about him going forward.

•   Speaking of which, Jeffress came in to “save” the five-run game last night, even as David Ross once again could have gone to Craig Kimbrel. Clearly, Kimbrel is still not ready to take his side work into even remotely risky game action. Meanwhile, Jeffress paired a gorgeous paint job with an even better no-look K strut:

That'd be like winning 130 games in a regular season. pic.twitter.com/uO4UBDw67B

•   But it’s also fun to think about how these are the first 15 games of David Ross’s managerial career. I’d say it’s gone well, yes?

•   Bonus on Ross – here was his perfect response last night to Willson Contreras getting an absolutely bogus ejection:

•   Javy Báez with an incredible flex:

•   The two friends also had some in-game fun:

•    Amazon clearly wants to make you feel relaxed with its Deals of the Day today: massage stuff, bath and body stuff, and candles. #ad