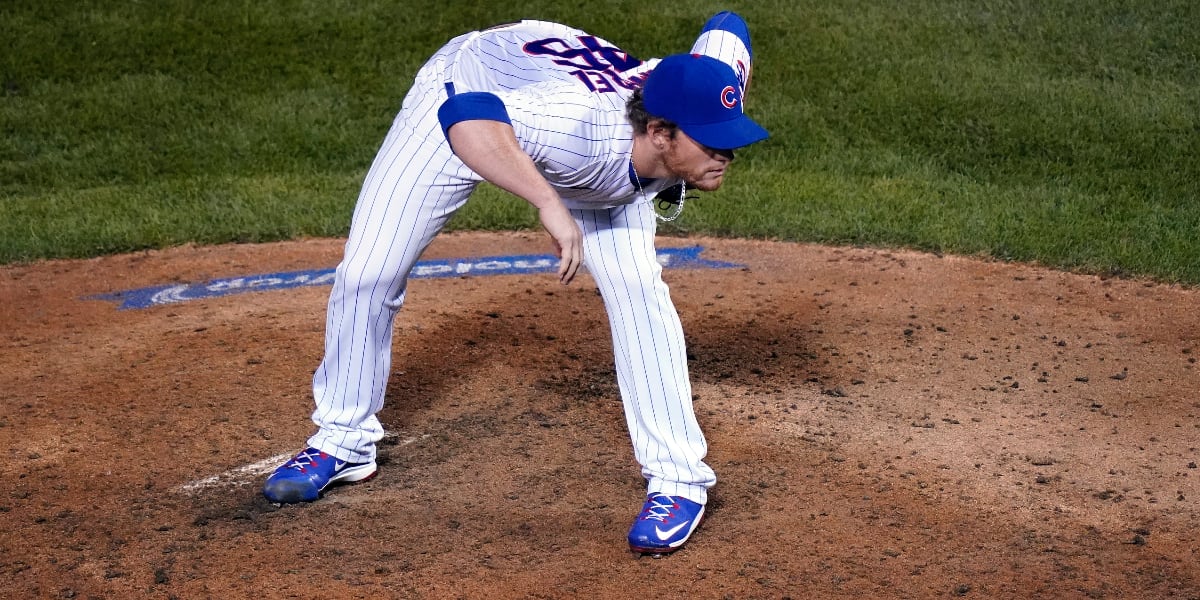 Obviously, there were not many positives to take away from the Cubs very bad weekend with the Brewers, but I like to be optimistic on a Monday, so let’s talk about one of them: Craig Kimbrel.

After a really rough start to the 2020 season (7 earned runs in 2.2 IP) that saw him effectively, if not definitely, lose his job as the Cubs closer for the time being, Kimbrel tossed back-to-back scoreless outings against the Brewers, with four strikeouts, no hits, and just one walk.

Craig Kimbrel is trending in the right direction: https://t.co/iuLckdwh9f pic.twitter.com/mXeh8D51FB

On Friday, Kimbrel’s fastball was averaging 97 MPH, his highest of the season, while his knuckle curve, which hadn’t netted a swing all season, generated not one, not two, but three swings before his outing was through. And despite the added velocity and once again useful curveball on Friday, Kimbrel arguably looked even better on Sunday, when he sat the Brewers down for a 1-2-3 inning with two strikeouts and an infield pop-up.

And so as not to lose this in the shuffle: these were not mop-up duty outings. Far from it, in fact. On Friday, Kimbrel came into a one-run game in the 9th, and on Sunday he was in on a one-run game in the 8th inning. Neither appearance was exactly the closer’s role he was brought into Chicago to perform, but they were high-leverage, important innings and for now, that may be where Kimbrel sticks.

When asked if Kimbrel was ready to take over as closer again after yesterday’s outing, what David Ross didn’t say said an awful lot:

“Yeah, Craig’s throwing the ball well,” Ross said. “It looks like the things that he’s done well over his career.”

Is Kimbrel back to being your closer going forward?

“I think Craig’s throwing the ball real well,” Ross said. “I really do.”

“I try to set each guy up to succeed,” Ross said. “Craig at the back end of our bullpen is definitely an option.”

Whatever his role, the results have started to get better, and – more interestingly – so has the underlying performance.

Before digging into the data, I just want to point out generally how much better Kimbrel has looked on the mound. At the broadest level, he seems to be staying taller and more centered, avoiding getting too rotational (which yields that big fall off the mound to the first base side). It seems to me, when he stays upright after his delivery he ends up having improved command, which is key to keeping hitters honest with his fastball – they can’t just sit on one spot if he’s moving it up and down, in and out.

But obviously, being able to throw that knuckle curve for a strike is an enormous development, as well. The more he inches into the zone with both pitches, the more aggressive batters must be. And the more aggressive they are, the more whiffs we’re going to see as Kimbrel also hides his pitches better. That knuckle curve has always been nasty, but it only really works when batters are fooled by it out of his hands.

In these past two games, the Brewers looked genuinely unsettled at the plate, swinging at balls out of the zone while also watching strikes fall in.

After getting ahead early in the count against Garcia, Kimbrel went to his knuckle curve, which got his first swing of the season. And after flashing that pitch just once, Kimbrel was able to strike Garcia out on a 97.6 MPH heater at the top of the zone.

Although Kimbrel walked the second batter he faced on Friday, he threw his knuckle curve for a called strike on the second pitch of the at-bat, which led to a whiff on his knuckle curve immediately after. The battle was lost thereafter, but that’s a good sign for the on-going war.

Kimbrel got his third knuckle curve swing of the season against Ben Gamel, and although it was a pretty hard hit liner (102 MPH), it was directed right toward Nico Hoerner for the second out.

For the final out of the day, Kimbrel started Manny Pina with four straight fastballs, just like Gamel, but instead of going to the curve (which may be what Pina was looking for, given the previous at-bat), Kimbrel delivered some high heat for the third strike.

Saturday was even better – and even more impressive considering it was against the three same hitters. They literally just saw both of Kimbrel’s pitches and how he attacks guys in certain counts, and yet they produced even less, looked even more uncomfortable, made less and worse contact, and watched more strikes go by.

Kimbrel went up in the zone only once in this at-bat, the one whiff, and otherwise placed his fastball absolutely PERFECTLY: 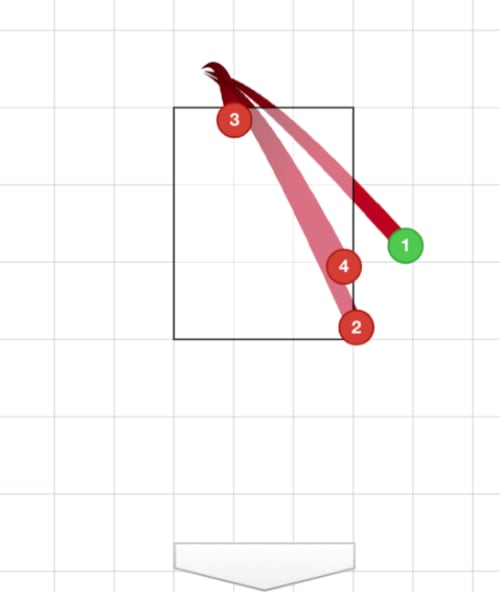 In maybe the most encouraging plate appearance of Kimbrel’s season, he dropped two hammers on Smoak, who just watched them go by with absolutely no plan to attack. Three pitches, total confusion, three strikes, sit down.

Kimbrel threw nothing but fastballs to Manny Piña across both at-bats, which must’ve just been the book on him.

But these exchanges weren’t just a mix of good luck and good results. Yes, Kimbrel had better command and velocity, but it sure seems like he had both of those because of significant mechanical changes, evident in his horizontal and vertical release points: 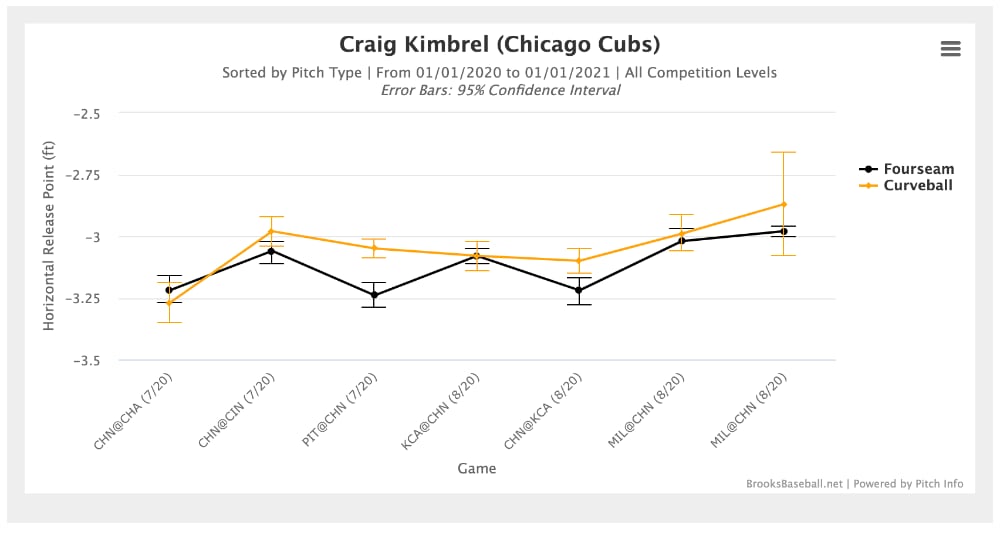 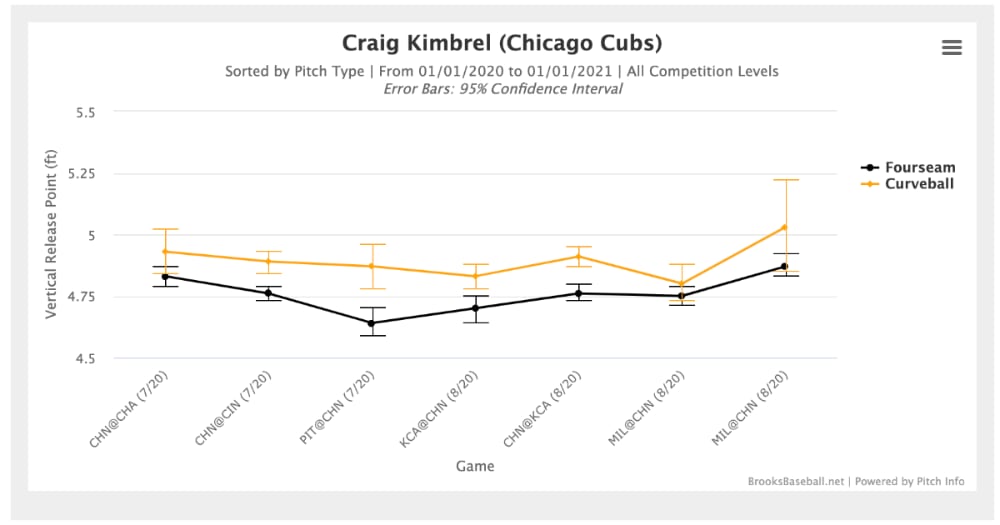 Both release points are still down from the peak of his career, but if they continue to move in the right direction, I think we’re going to see better pitches, more unbalanced hitters, and a lot more batters guessing overall. From there, we could have a bit of a multiplier effect, where Kimbrel’s ability to get batters out improves dramatically.

It’s been only two outings and like David Ross implied, we’re not quite out of the woods yet, but these were two encouraging outings in high leverage moments with all the right peripherals underneath. For now, I choose to be optimistic.