Kris Bryant and Steven Souza Jr. Each Reported to South Bend for Some Rehab At-Bats | Bleacher Nation Skip to content 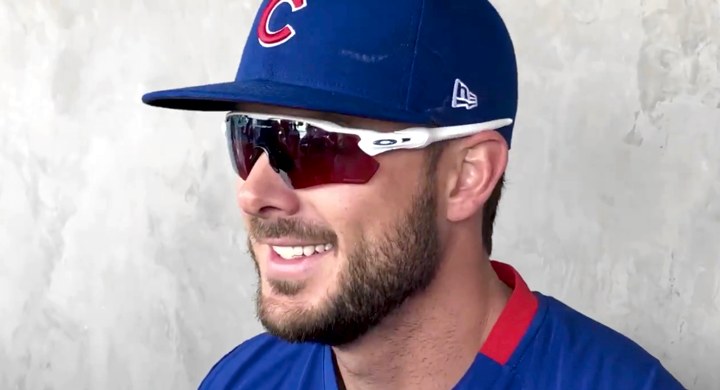 One of the Cubs biggest problems this season is hitting left-handed pitching (indeed, that’s not entirely unrelated to their recently rumored interest in Tigers outfielder Cameron Maybin).

Part of the reason for their struggles against lefties is just general underperformance and the overwhelming number of left-handed and/or switch-hitting bats on the roster. But perhaps an even bigger factor has been the on-going absences of third baseman Kris Bryant (wrist) and outfielder Steven Souza Jr. (hamstring), both of whom have hit lefties well throughout their careers and have also been out of commission for a significant portion of this season.

Fortunately, according to David Ross, they’ve begun to work their way back with a trip to South Bend:

Kris Bryant and Steven Souza Jr. had five ABs each in South Bend. Both came out of those healthy. #Cubs

The rest of the Cubs 60-man roster resides at their alternate training site in South Bend, and that’s where the two Cubs righties were sent to get their rhythm back before returning to the roster. Unfortunately, while they can face live pitching, there aren’t actually any games going on against other teams, so inter-team scrimmages is the best they can do.

In either case, it’s good to see (1) they’re feeling better, (2) they’re already taking at-bats, and (3) neither left those at-bats with any subsequent pain or issues. Tomorrow is the first day Kris Bryant is eligible to come of the Injured List (Souza was first eligible today), so it’s not impossible we might see them alongside a series of additional roster moves to supplement the team for tomorrow’s double-header (when the roster will increase to 29 anyway), but I wouldn’t get your hopes up just yet:

If neither batter quite had their timing yet, they may want to continue warming up in South Bend before taking meaningful at-bats at the big league level where the games actually count. I think it might take a while yet.

Speaking of the double-header, Yu Darvish and Alec Mills will start both halves of tomorrow’s game, which is an extra day of rest for Darvish and normal rest for Mills thanks to the off-day, which likely means we’ll see a Jose Quintana/Tyler Chatwood piggy back of some kind on Sunday (also on normal rest).

Darvish in Game 1 and Mills in Game 2 on Saturday vs. Reds. Sunday still TBD.

Bryant and Souza have reported to South Bend. Each took 5 ABs with no issues. Are "trending in the right direction" per Ross.

I would have thought, by the way, that Darvish was going to start Game 2 tomorrow considering that his personal catcher, Victor Caratini, is behind the plate tonight for a night game … which means if Willson Contreras catches tomorrow night’s game both of the Cubs catchers will catch a day game after a night game when it could’ve been easily avoided by going Caratini tonight, Contreras tomorrow early, Caratini tomorrow night, Contreras Sunday early. Alas. I’m not a big league coach. Who knows. Maybe Josh Phegley is starting.