The Goodbye Tour of the NL Central Begins: Cubs at Pirates, September 1-3, 2020 Skip to content

If ever there were a stretch of games that was going to define this season this is it.

But before we get there, the Cubs must start their goodbye tour of the NL Central with a three-game set against the Pirates in Pittsburgh – a series they’ll will start with a very different roster. Specifically, the Cubs used the deadline to add designated hitter/lefty masher Jose Martinez, outfielder Cameron Maybin, and lefty reliever Josh Osich (as well as lefty reliever Andrew Chafin, whom we won’t see for a couple of weeks). Beyond that, Albert Almora Jr. was optioned to the team’s alternate site in South Bend, while Kris Bryant and Steven Souza are expected back sometime soon (as soon as today).

So there will be some changes, as well as some key things to look out for (like Who’s going to be the leadoff hitter when Kris Bryant returns? And Will Martinez DH against more than just left-handed pitchers?). Most importantly, the Cubs will want to kick this stretch off on the right foot. So let’s get it.

The Chicago Cubs (20-14) After getting off to a torrid (13-3) start, the Cubs have begun to stumble, losing 11 of their past 18 games, including some meaningful divisional contests. They need to turn the jets back on and soon if they want to take advantage of being a first seed and having the end of the season to rest and ensure everyone’s health before October.

The Pittsburgh Pirates (10-22) just dropped 3 of 4 to the Brewers (thanks for nothing), after taking both halves of a double header against the Cardinals (oh wait, thanks for that actually though). They also swept the Brewers last weekend, which is kind’ve crazy, because that means they’ve been the cause of a combined six losses for the Brewers and Cardinals over the past week. I can dig that. Now stop being good immediately.

Cubs Pitcher: Kyle Hendricks is getting the ball on Wednesday and it’s an important start for him. We’re going to find out if his “road troubles” this year are actually a “road-troubles” thing or just a “the Reds have a good lineup and it’s tough to pitch in Cincinnati twice in one month” thing. Given how good he’s been in four of his seven starts this season (and for pretty much all of his career before that), I’m willing to give him the benefit of the doubt. Let’s see that big bounce back though, Kyle.

Cubs Player: Kyle Schwarber has been really crushing the ball lately, raising his season slash line up to .228/.333/.500 (121 wRC+). And given his 95 MPH average velocity (top 2% of the league) among other peripherals, Statcast has his expected batting average up to .242 and his expected slugging percentage up to .526. Those are huge, positive signs for a guy already producing well enough at the moment. Of course, the one big (and legitimate) criticism for Schwarber so far is all the strikeouts (32.6%).

Fortunately, we may be heading in the right direction already: 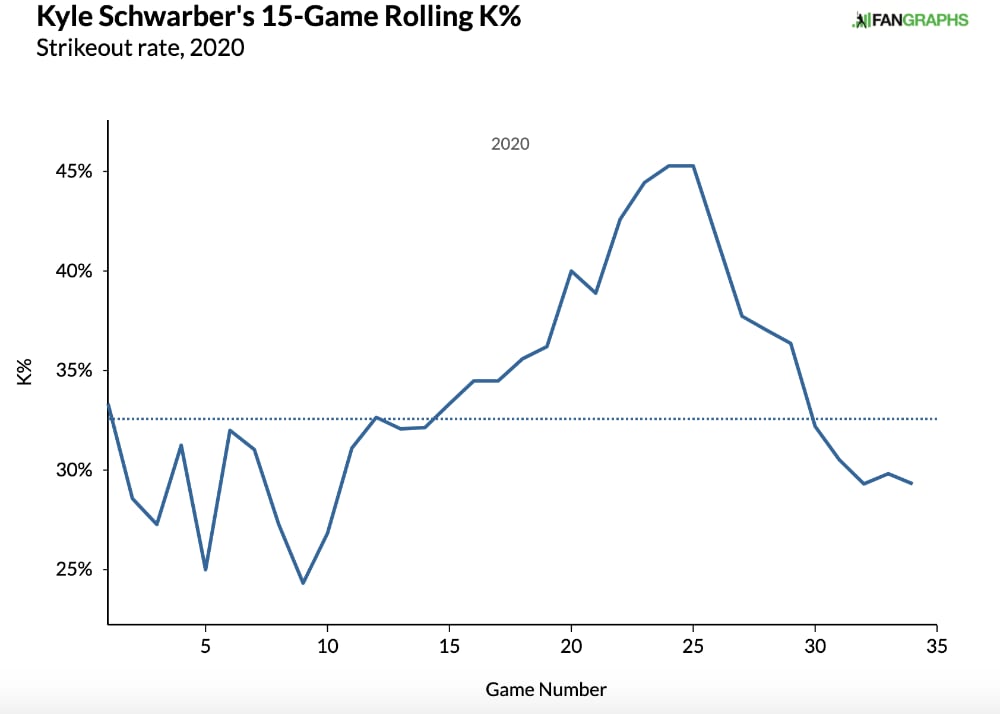 That could be partly explained by his contact rate and zone swing rate ticking back up to league average on both pitches in and out of the zone and that’s all nice to see. Hopefully, he’ll put a few more balls in play and rack up a few more multi-hit games than the four he has this season.

The Pirates Pitching Staff: has a 5.85 ERA (5th worst in MLB) and a .353 wOBA against right-handed batters this season. Now would be a good time to add Cameron Maybin, Jose Martinez, Kris Bryant, and Steven Souza Jr. to the roster … Oh wait. The Cubs are doing exactly that. Crush them. (Including old friend Derek Holland.)

Pirates Player: Kevin Newman is the best qualified Pirates hitter and he has a 77 wRC+. So, yeah. It’s not great over there. But to be fair, lower the threshold to 89 PAs and Colin Moran (128 wRC+) is one of just two Pirates players with a positive overall wRC+ (Jacob Stallings is the other at 127). This is a beatable offense. The Cubs really need to do work.