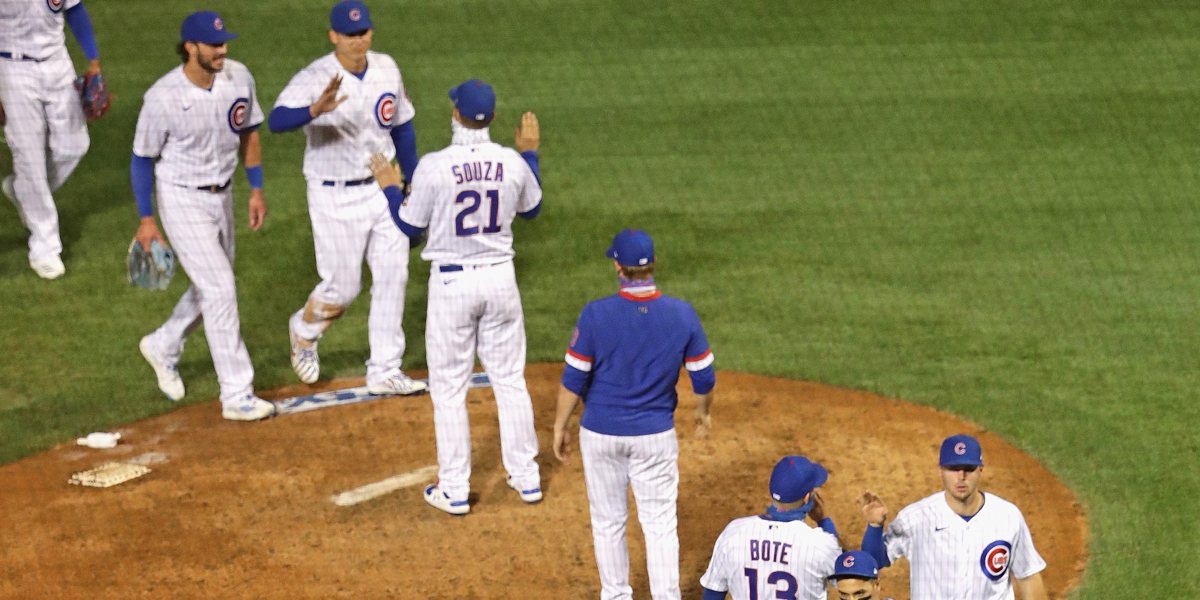 Decided to take The Little Boy on a guy’s trip to Chicago this weekend. I know there’s not a ton we’ll be able to do, but it’s been a minute since I’ve been able to go, for obvious reasons, and I figure we can still walk around outside, get some great food, and hear the sounds of a doubleheader at Wrigley Field.

•   The Cubs’ win and the Cardinals’ loss last night set things up in the Central such that both the Brewers and Cardinals are now 4.5 games behind the Cubs, though the Brewers have played eight more games than the Cardinals. So weird, and it’s a reminder of just how challenging it’s going to be for the Cardinals to actually come back down the stretch. If they don’t win *at least* three of the next four games against the Cubs, they can probably kiss their hopes at winning the Central goodbye.

•   The Cubs, meanwhile, are back to having the second best record in the National League (.605, tied with the Braves).

•   The double-play to lock up last night’s win was a fun one from Javy Báez, who took a hop right over second base – hey, the shift is great sometimes! – and used his bare hand to touch second base to save a fraction of a second before throwing on to first:

•   Feels like we’ve seen so few “El Mago” moments this year, and that’s such a big chunk of the fun of watching this Cubs team. It was nice to see that play, and the smiles that followed.

•   Meanwhile, that was Jeremy Jeffress getting another traditional save opportunity in a well-rested bullpen. Rowan Wick got the 8th, and Jeffress got the 9th. I think that’s what you want to see going forward in spots where it’s a clear “Cubs have a small lead, cover the final two innings” situations. Sure, you’d love to have Craig Kimbrel in the 9th to allow more flexibility to deploy Jeffress in whatever big spot comes up before the 9th, but it’s impossible to trust Kimbrel at the moment. He’ll just have to cover whatever innings are available to him for now, he’ll have to look right for several of them in a row, and he’ll have to maybe cover the 9th after that when Jeffress is down for a day.

•   Something to watch in today’s Adbert Alzolay start? He clearly developed a new pitch while working at South Bend this year:

•   No, it’s not a cutter like many of his brethren, it’s a two-seamer/sinker that comes in at the same velocity as his four-seamer (93-96 mph), but has serious arm-side run. If he can still spin a quality curveball and mix in a changeup (which seems to come and go for him), that’s a really nice set of pitches.

•   Alzolay starts game one today, with game two set to be a bullpen game, but it’ll probably depend a bit on how game one goes. If Alzolay can give the Cubs five strong innings, then you have a lot more flexibility in what you want to do with game two. Tentatively, I’d expect Colin Rea to be held in reserve to start game two.

•   Pedro Strop won’t be ready to join the Cubs this weekend as he heads to South Bend, and then it’ll be an open question if he can come up at all this year. His signing came in very close proximity to the releases of Cody Allen and A.J. Ramos (other righty reclamation reliever types), and here’s how David Ross described the decision to let them go (Cubs.com): “Their stuff wasn’t quite ready in their eyes,” Ross said. “I listen to the feedback from that group there and what they’re watching and seeing. And they felt like they weren’t ready to contribute here for the big club. So, I trust in that group over there and their decision-making.” We love Pedro, but the same evaluation will take place.