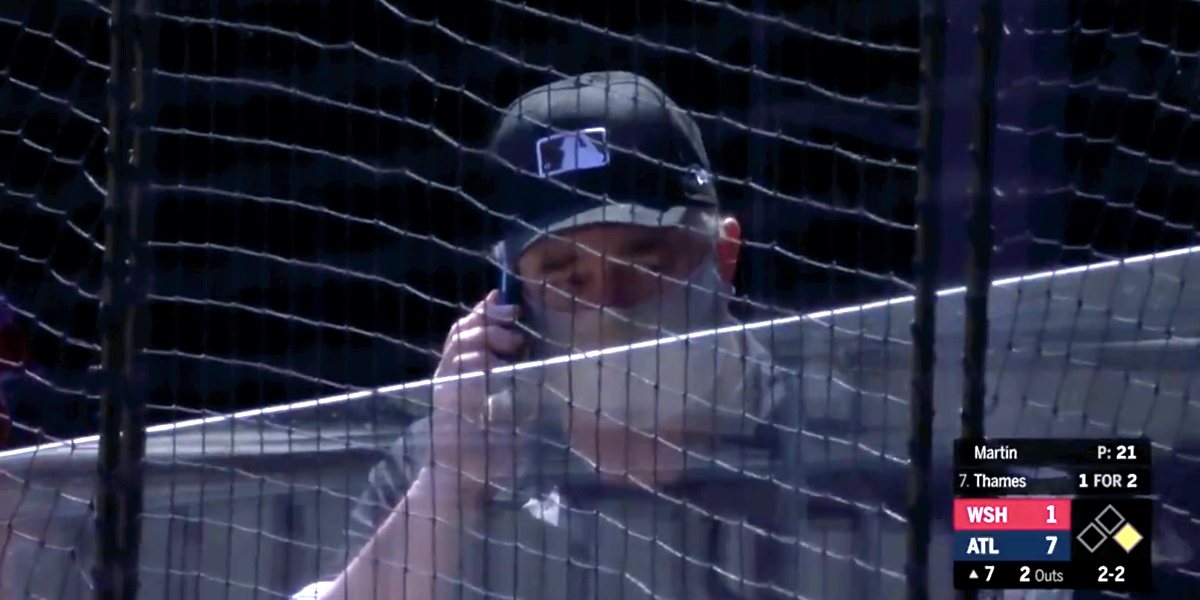 I am all about the importance of wearing masks as part of the country-wide efforts to limit the spread of COVID-19. They aren’t perfect – nothing is – but, according to actual experts, masks do a pretty good reducing the droplets that come out of a wearer’s mouth, and those droplets can contain and spread the virus. There’s a reason MLB has had so much success limiting spread this year, and a reason it mandated mask-wearing by everyone in the park except the players actively playing on the field.

… however, it does seem a little extreme for umpire Joe West to look up into the suite where Nationals GM Mike Rizzo is standing alone, eject him for not wearing a mask (or maybe Rizzo was yelling down?), and then call security to enforce the ejection:

Joe West calls security to get someone kicked out of the game. pic.twitter.com/pr9WYkYE1M

Mike Rizzo apparently was ejected from Sunday's matchup with the Braves. pic.twitter.com/NQFoF3Jiuj

Again, I’ll say, Rizzo should’ve been wearing a mask. I don’t know why he didn’t just put one on whenever this – whatever it was – started. But Joe West has a streak of this kind of “I’m the Sheriff” behavior, and it feels like he was doing a little more than trying to enforce the rules in good faith.

Or it’s possible West also didn’t like something he was hearing from waaaaay waaaay up there, and that’s part of why Rizzo got the boot? We’ll find out soon enough, I expect.

UPDATE: Actually, the broadcasters had it wrong, and it was that latter part. West didn’t like Rizzo yelling down, and here was his explanation on the ejection:

Washington GM Mike Rizzo ejected for yelling at the umpires from a luxury suite.